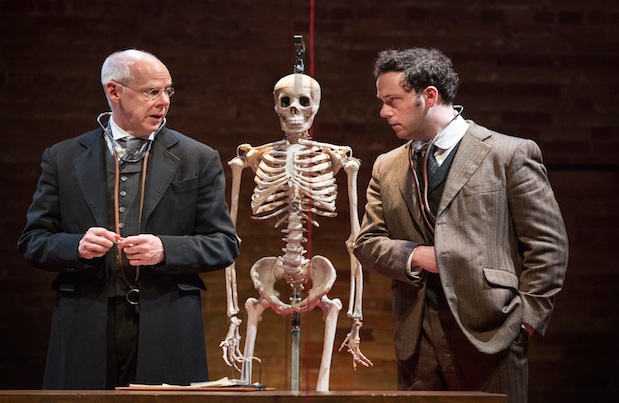 Soulpepper’s commissioned adaptation of novelist W. Somerset Maugham’s substantially autobiographical masterpiece Of Human Bondage is packed with insights and philosophy, but above all it is an elaborate and thorough tale of heartbreak that holds wistful familiarity for just about anyone who has lived much. Directed by Soulpepper’s artistic director Albert Schultz, Of Human Bondage scores on every level and from all angles.

While Of Human Bondage has been made into more than one film, this adaption by Governor General’s Award-winning playwright Vern Thiessen is the first done for the stage. Thiessen’s play skips the first 50 chapters, nearly half of Maugham’s 600-page novel, and begins with the protagonist Philip Carey (Gregory Prest) entering medical school, just before meeting the unscrupulous and self-serving Mildred (Michelle Monteith) with whom he becomes tragically obsessed.

The story—written during the First World War and set in the last years of the 19th century and the beginning of the 20th—is class conscious, and characters remark that Carey will never get a position as a doctor if he insists on marrying that low-class waitress Mildred.

That Carey could fall hopelessly in love with Mildred who is coarse, disdainful of his affection, and wrong for him in every way, is the essence of the whole story. When Mildred leaves him for a better prospect, Carey winds up with Norah (a moving performance by Sarah Wilson) who adores him and seems a fine match, but he doesn’t feel for her what he does for the abominable Mildred. Haven’t we all been there?

The “bondage” in the title refers to a quote from Spinoza in which he says “the impotence of man to govern or restrain the emotions” leaves us all to make poor choices for ourselves even when we know better. The play is literary and contemplative, but the basic story of unrequited love is central and accessible at all times. Some characters are pretentious but the play is not.

Schultz and his cast of eleven have delineated dozens of tangible, identifiable characters. Prest and Monteith are pitch-perfect as two sides of the relationship from hell. All other actors play multiple roles, each worthy of separate praise. Don’t distract yourself trying to follow who is playing which parts; the characters have such depth you forget there are actors inside them.

Two characters who cannot go unmentioned are Cronshaw the drunken poet (Dan Chameroy, who plays the fun roles) and Lawson the sculptor (Oliver Dennis). Carey’s relationship with art and his friendship with these artists are key aspects of the story. Much as Carey can’t get over Mildred despite her derision, he also can’t shake his desire to be a painter even though he has found he doesn’t have what it takes. Throughout the play there are multiple manifestations of what could be called Carey’s art.

The staging is astonishing but so integrated that it offers no distraction and you might take it for granted. Indeed so much is being done with such economy it is hard to know on whom to lavish praise. Transitions are not merely quick, they happen without interrupting the action or dialogue. Picture frames held by performers-in-neutral form walls as needed, giving a palpable sense of spaces characters are inhabiting. New locales take shape as quickly as actors turn in a new direction, furniture and props shifting around them like a kaleidoscope. Who is playing that flute? The xylophone? Where are all these sound effects coming from? The stage seems to hold an orchestra, and an army of stage hands imperceptibly moulding new spaces as the story clips along. The safest bet is to credit the coordinated efforts of the director, the uniformly fantastic cast, composer and sound designer Mike Ross, stage manager Robert Harding, and set and lighting designer Lorenzo Savoini, whose use of expansive shadows on the broad exposed brick wall at the back of the stage is gratifying.

The play has the narrative impetus of Dickens and is as full of pithy, quotable lines as Oscar Wilde, but soulful rather than flippant. Soulpepper’s Of Human Bondage is a rich and beautifully rendered story that you don’t want to miss.

Soulpepper’s Of Human Bondage runs until May 17. For show information go to www.soulpepper.ca.