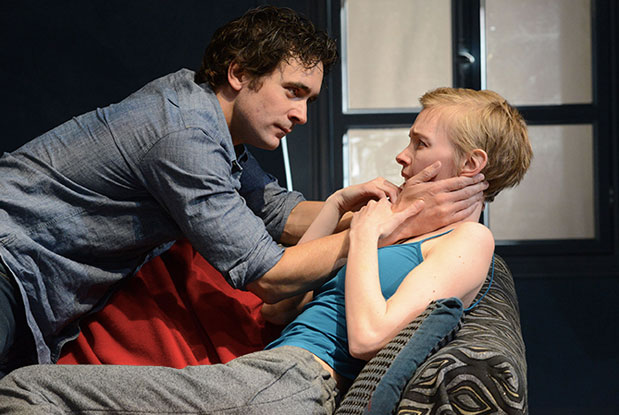 Allan Hawco, co-artistic director of The Company Theatre (and recognizable star of CBC’s Republic of Doyle), leads a cast of four in Amy Herzog’s ominous drama Belleville, now playing at Berkeley Street Theatre until May 4th. The Company Theatre’s aim to make every performance “surprising, authentic and spontaneous” pairs well with Herzog’s naturalistic dialogue. Director Jason Byrne capitalizes on this, making both action and dialogue feel like they are unfolding for the first time right before your eyes.

A young American couple seems to have their loving marriage headed in a promising direction after settling in Paris where Zack (Hawco), who’s recently graduated from medical school in the US, has undertaken important work with Doctors Without Borders. When his wife Abby (Christine Horne) comes home unexpectedly from a cancelled yoga class, she finds him there unable to explain why he is not at work.

Contrary to expectations, Abby is unhappy in Paris. She mopes, “I just don’t have enough to do,” and poignantly complains, “I’m so tired of this pressure to be happy.” Zack and Abby are each so determined to be a good spouse and to do what the other wants that both wind up disillusioned. Gradually, insecurities and resentments of increasing gravity come to the surface.

Their lives are contrasted with those of their landlord Alioune (Dalmar Abuseid) and his wife Amina (Marsha Regis), young Muslim immigrants who have their lives well in hand. Abby and Zack’s difficulties—such as not being able to get home for Christmas—can be called legitimate, but they would have to be categorized as “first world problems.” This is especially true in the eyes of Alioune and Amina, who feel a very different set of pressures: not to be seen as happy, but rather to be responsible for themselves and their children.

Zack and Abby’s apartment is subdued and undecorated, but furnished well enough to be home-like (set and costume designer Yannick Larivée). The window and French doors are used to good effect through Kevin Lamotte’s lighting design, which beautifully shows passage of time and frames moods from scene to scene.

Belleville is essentially an eerie, low-key thriller, but it has some laughs that mostly originate with Horne, whose character bears superficial resemblance to Herzog (herself an erstwhile actor and yoga instructor). But whereas the 30-something American playwright is known for plays that draw on her own experiences and family, Herzog maintains that Abby is not based on her.

The story and characters chew on Generation-X angst, examining concerns that will feel more familiar and important to some theatregoers than to others. What’s likely to appeal to a broad audience, however, is the freshness of the performance, which makes Belleville feel like an organic event rather than an orchestrated show.

$22-49. A Company Theatre Production (in association with Canadian Stage), Belleville, is on-stage at Berkeley Street Theatre, until May 4.