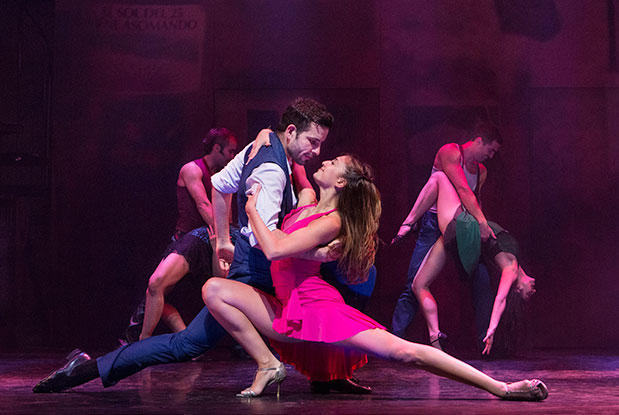 Told entirely through dance and the music of Academy Award-winner Gustavo Santaolalla (Babel, Brokeback Mountain) and his band Bajofondo, this is the coming-of-age story of a girl, Arrabal, who is drawn into the steamy underbelly of Buenos Aires’ tango clubs by the spirit of her father. There, she discovers the marks left by Argentina’s violent political past. In 1976, the brutal dictator General Jorge Rafael Videla overthrew the then-democratic government and turned some 30,000 Argentines into the “disappeared”—men and women who were tortured, kidnapped or killed—including Arrabal’s father.

The choreography (by Sergio Trujillo and Julio Zurita) is rousing, and uses the tango’s full potential as a medium to express the many faces of passion: lust, rage, violence, and finally, love. It’s a dance that’s both freeing and constraining, but utterly enthralling to watch—and to dance, which is why tango lessons are offered prior to each show.

The Panasonic Theatre space is used beautifully, with a towering corrugated tin backdrop used as a projection screen for television clips, the grimly haunting portraits of the disappeared, and even the night sky. The music is heartpounding, and Marcello Lupis is particularly dynamic on the violin.

Given a week or two, Arrabal will come into itself. This is its world premiere and there are a few kinks to iron out. Fingers crossed, the relationships between cast members will mature and dancers will gain true surety of movement. On opening night, the chemistry hadn’t yet peaked, and some of the cast members still glanced down at their feet, which is understandable for such a complex dance.

Marianella, who plays Abuela, is a pitch-perfect grandmother, at once stern and kind-hearted, while Micaela Spina’s Arrabal is sweet and guileless as she flits wide-eyed about the stage. Her fragility instantly endears her to the steadfastly masculine Juan Cupini (as Juan), and their chemistry is fun to watch.

It needs to be said, though, that from the moment Soledad Buss (who plays the intensely sexual Nicole) stepped onto the stage, I was mesmerized. She dominates each of her background roles—businesswoman, police officer, a woman grieving—and as Nicole, she might as well have been the only one on stage.

Arrabal is strongest at its quietest, and at its most sensual. When the spirit of Arrabal’s father first visits her, the choreography is moving, and perfectly captures the desperation of loss. Another high point is struck when Nicole "teaches" Arrabal the art of sensuality (a scene that culminates in most cast members stripped to their skivvies, and Arrabal being tossed from man to man). It's moments like these that validate the production being suitable for those “14 and up.”

However, the story (Tony Award-winner John Weidman) is not as clear as I would’ve liked. Cast members inhabit many different roles, the line between the living and the dead is blurred, and the celebratory ending feels somewhat rushed.

Still, there is a beautiful energy to the production, which runs 90 minutes without intermission. Audience interaction is used to great effect, with tables bearing delighted audience members placed on either side of the stage, and cast members strutting down the aisles and inviting the audience to tango with them. At the end of the show, enthusiasm reached fever pitch with most of the first few rows bounding onstage to dance with the cast.

So, kinks or not, this is already a toe-tapping production.