Theatre: Come From Away a surefire Broadway hit - Streets Of Toronto
Skip to content 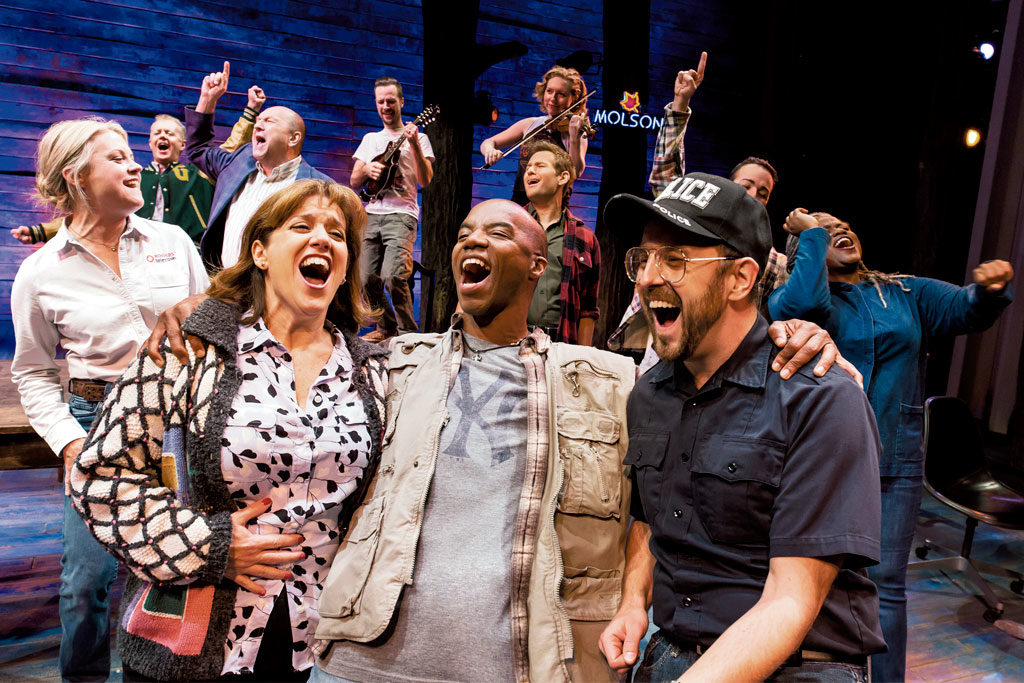 The musical Come From Away, written by East York husband-and-wife team David Hein and Irene Sankoff (and developed at Sheridan College), has already received rave reviews after runs in Los Angeles and Seattle. Now, it has opened here in Toronto at Mirvish Production’s Royal Alexandria Theatre, ahead of a hotly anticipated Broadway debut in 2017.

On opening night, the capacity crowd leapt to their feet at the curtain call.

Sheridan's performing arts dean Michael Rubinoff first met Sankoff and Hein after their first surprise hit musical, My Mother’s Lesbian Jewish Wiccan Wedding, was picked up by Mirvish and eventually ran in New York City, off-off-Broadway in 2010. He asked them to consider writing a show about the people of Gander, Newfoundland, who found themselves hosting 38 planes diverted to their rarely used airport after the events of 9/11 shut down American airspace. The nearly 7,000 passengers who landed there almost doubled the population of the town, and for five days, they were treated to Newfoundland’s legendary hospitality.

When Sankoff and Hein visited the island to gather material in 2011, they were nearly overwhelmed by the same generosity, and collected enough stories to stuff their show.

Music and storytelling is a much vaunted aspect of Newfoundland culture, and there’s plenty on display in the show.

Come From Away jumps right into the morning of 9/11 from the residents’ perspectives and moves swiftly through the events of that week, as planes arrive full of confused and frightened people.

The hundreds of passengers we meet include a plane full of strangers who drink the liquor cart dry and get frisky, and a group from Africa who have to find a way to communicate with Gander’s English-only volunteers.

The cast of 12 actors is refreshingly older than most musical casts and brings a wealth of life experience to colour and effectively characterize the hundreds of people they portray.

The focus of the show is on the intertwining stories, less so huge show-stopping numbers; although a joyous “screeching in” ceremony and other clever transition scenes on the revolving stage keep the cast on their toes.

What the creative team behind Come From Away has done — taking the tragic events of 9/11, and using a rural Canadian town to showcase how the world came together to try and make sense of them, to help each other and to heal — is almost a miracle in itself, and it’s a testament to the restorative power of art.

It’s also an opportunity for Torontonians to see first what is almost certain to be one of the hottest tickets on Broadway.

Come From Away runs until Jan. 8 at the Royal Alexandra Theatre, www.mirvish.com.