The wicked ’wich of the East: the rise of the gourmet banh mi sandwich in Toronto - Streets Of Toronto
Skip to content 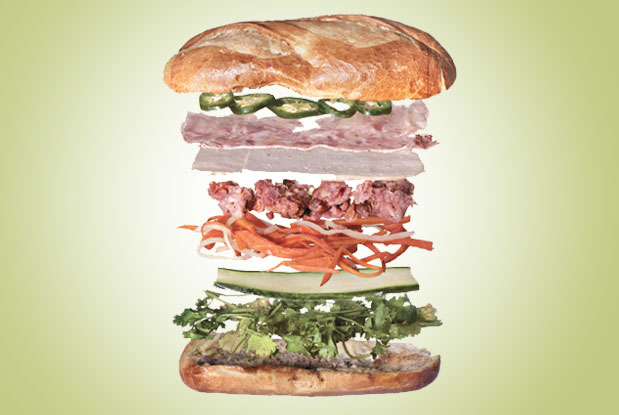 Not too long ago, I ate one of the slipperiest, drippiest, messiest sandwiches I’ve ever had. It was at a Financial District nook known as The Gabardine, wherein a fat French baguette was stuffed with pulled pork, raw onions, julienned carrots and kimchi. It was, apparently, an Asian fusion submarine sandwich known as the banh mi. It cost $14, sides included. To anyone planning on taking the plunge: bring a bib. Possibly two.

The Vietnamese banh mi is one of the best sandwiches known to man. When French-inspired bread is filled with tried-and-true Asian ingredients, magic happens. And judging from the recent incursion of this street food onto Toronto menus, banh mi would probably be ubiquitous here if our streets weren’t bafflingly dominated by the hot dog instead.

Banh mi is one of the few good things to have emerged from French colonialism in Vietnam. After decades of French influence, the Vietnamese kept a few mementos: they chose to forgo snootiness and stinky cheese but decided that fantastic French bread — the baguette — was worth keeping.

What I had at The Gabardine was good, but it was not, strictly speaking, banh mi. Sticklers would call it banh mi–esque. An “authentic” banh mi starts with a baguette made with rice flour in the Asian tradition and wheat flour in the European tradition. This is key. The combination results in a singular baguette that’s light as air, with a thinner, crispier crust than a French one.

In Vietnam, these baguettes are spread with butter, mayonnaise or pâté, then stuffed with meats such as cold cuts, headcheese, grilled chicken or pork, along with fresh cilantro, cucumbers and sometimes raw jalapenos. A slaw of pickled carrots and daikon adds crucial balance.

Toronto has long been home to a good selection of traditional banh mi. In the east end, Rose’s Vietnamese Sandwiches is a long-standing favourite, offering fantastic subs for as little as $2.50. In Chinatown, where banh mi is everywhere, Banh Mi Ba Le makes a fine tofu sub for $2.25.

Authentic banh mi is impossibly cheap. But Torontonians will almost always shell out more for something that’s billed as gourmet or as being otherwise nifty (terrible beer, labelled as organic, sells wildly here). That’s probably why several new restaurants are offering banh mi at considerably jacked up prices. For what I paid at The Gabardine, I could buy five banh mi subs, plus a milkshake, in Chinatown. Is splurging worth it?

Many would say yes. At the newly opened Banh Mi Boys, formidable lineups are commonplace. Brothers David, Philip and Peter Chau — who worked at their parents’ Vietnamese sandwich chain for years — offer subs from $4.99 to $7.49. Such price points are sacrilege for banh mi purists, but these subs aren’t filled with thinly sliced cold cuts or other mystery meat. The boys do their legwork, offering grilled chicken thighs that have been marinated in soy sauce for 48 hours; pork belly that’s rubbed with Chinese five-spice powder, then slow cooked in cola and veal stock; and duck confit with crackling and onion chutney.

Several new restaurants are offering banh mi at considerably jacked up prices.
But is splurging worth it?

Meanwhile, the baguettes are a customized version of traditional banh mi bread from the family’s bakery. The brothers experimented for months to create a unique rice-and-wheat baguette, one that stayed fresh longer and held up to toasting better than the traditional stuff. These are authentic banh mi sandwiches on steroids, fine-tuned for the Queen West set, and are worth the extra few dollars and the wait.

In Little Italy, Fuel House offers two takes on the banh mi for $7.50 apiece. They are served on standard, not-too-heavy baguettes from Golden Wheat Bakery, and they are delicious. Co-owner and chef Mike Dolegowski rubs pork belly with salt, pepper, sugar and other spices before slow-cooking it in lard. Thick slabs of the fatty meat come with house-pickled carrots and daikon, fresh cucumbers, cilantro and a sesame-infused hoisin sauce. Alternatively, slices of seared tofu are shacked up with kimchi, pea shoots and a hoisin-Sriracha mayonnaise. Both are excellent sandwiches, and the price point is perfectly acceptable for pub food.

This End Up (1454 Dundas St. W., 647-347-8700), one of the latest players to join the Dundas West restaurant boom, makes a variety of sandwiches plus cocktails and house-made sodas (try the pineapple sage, $3). Its banh mi has a big selling point: it’s made with cured pork belly that’s been house smoked for four hours over hickory. The meat is sliced thick — up to half an inch. And the baguette comes from a real deal Vietnamese bakery. It just so happens that smoky pork goes really, really well with a Vietnamese baguette, a carrot/daikon slaw and jalapeno mayonnaise. But at $12, it’s a good thing it comes with a side of salad or fries. For those looking to indulge, this is a quality, well-balanced, surprisingly authentic luxury sandwich.

So is shelling out worth it? Old-school banh mi is like espresso — it’s a light, quick, tasty pick-me-up. The gourmet banh-mi is a legitimate meal, and meals cost money. Still, at $14 — the equivalent cost of a Bentley, in the banh mi world — it would be nice to have somebody at The Gabardine, anybody, tuck my bib in for me.