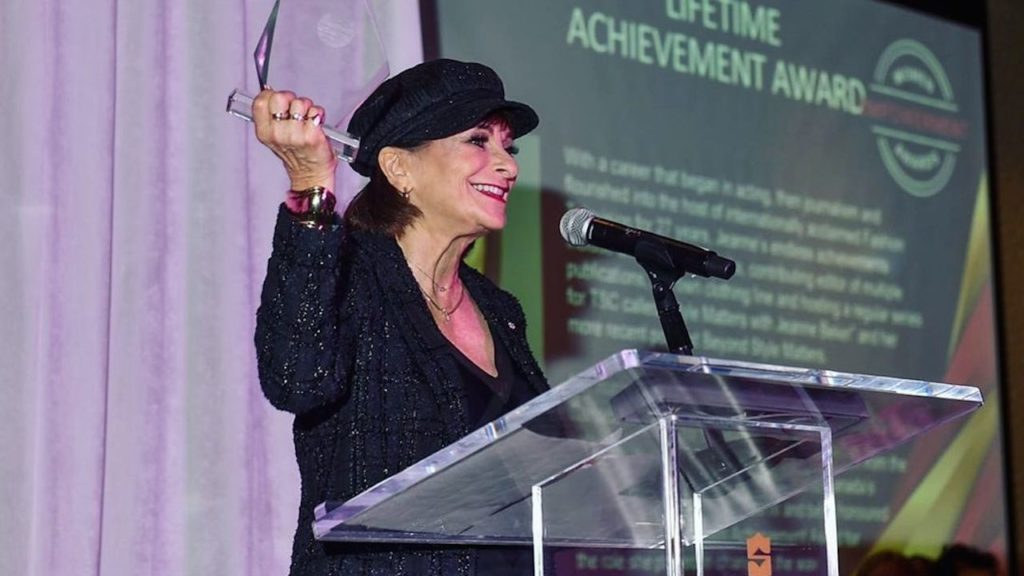 For over 25 years, Jeanne Beker has been gracing the pages of Post City Magazines and now Streets of Toronto, offering her fashion wisdom to our readers. Revered for her warmth and her expansive career (and with a new women’s empowerment award under her belt), we sat down with her to discuss her biggest challenge yet and her commitment to openness through it all.

In the face of cancer, Jeanne refuses to be anything other than a ray of light.

Publicly trotting out bites of wisdom alongside moments that shed humour on her situation (see: hair loss and fabulous wigs!), if nothing else, breast cancer has allowed Jeanne to be more true to herself than ever before. Equipped with a positive outlook, the Canadian fashion legend is determined to see her journey as a healing one, an approach that has helped both her state of mind and her family’s: daughters Joey and Bekky O’Neil and partner Iain MacInnes.


“I’ve been having an interesting time just discovering new layers of myself while on this cancer journey,” she says. “There are lots of silver linings, for sure.”

Jeanne’s diagnosis came as quite the surprise. After celebrating her 70th birthday, Jeanne went in for her routine mammogram. “I felt perfectly normal!” she says. Every year since her rock ‘n’ roll days, Jeanne has been celebrating her birthday in March alongside Debby Hill — one of her oldest, dearest friends. As was their custom, they had a phone call at midnight, bridging their 70th birthdays.

Jeanne was feeling invincible: “I was thinking, I’m gonna write a new book about aging with power, and I just felt so incredibly on top of the world. And then I got my diagnosis.”

Her friend was diagnosed with stage-four lung cancer and, sadly, she died seven weeks later. “That really rocked my boat,” Jeanne says. “If that could happen to Debby, the most beautiful, vibrant, firecracker woman? Wow.”

Despite the pain and unsettling timing of her friend’s sudden passing, Jeanne was able to draw upon her tenacious nature; her parents, who were Holocaust survivors, always found the light within all the darkness and rebuilt their lives. “My father’s motto was, ‘Don’t be afraid and never give up!’” Jeanne says. “That’s in my DNA.”

Jeanne’s perspective on mortality has undoubtedly shifted since her diagnosis. “I’d never thought about my mortality,” she says. “Life is just so precious. I’ve always been grateful for this extraordinarily wonderful life that I have, but boy, I’m especially grateful now,” she says. “You just start to see the world through a really poignant lens.”

Colours are more vibrant; beauty can be unearthed in the ordinary; complaining about anything feels futile. “The doors of perception have really swung even wider open, if that’s possible,” she says.

“Thankfully, they caught my cancer early and it’s treatable. It’s curable.” Although her type of breast cancer — HER2-positive — can grow more quickly than other types, Jeanne points to major advancements that have been made in recent years. While her chemotherapy sessions at The Princess Margaret Cancer Centre have wrapped up, she’ll be going for Herceptin treatments every three weeks until June, and will undergo surgery this fall.

“Princess Margaret — what a healing place,” she says. “The doctors are rockstars; the nurses are fantastic; they’re at the top of their game.”

From the moment she got her diagnosis, Jeanne knew that she would share her breast cancer journey publicly. Her desire to divulge stems from her belief that, as a person in the limelight, you owe it to the public to share tough situations that may resonate with — and potentially help — others. “There was no way that I wanted to keep it secret,” she says. “I thought that would be quite a burden in itself.”


Viewing her followers as her “biggest cheerleaders,” Jeanne’s heart has been filled to the brim, reading every single comment on her Instagram posts and, yes, each and every emoji. Her journey has truly resonated with people. For Canadian women, it’s the most common cancer; it’s estimated that one out of every eight women will be diagnosed with breast cancer, while two out of every five Canadians will be diagnosed with some form of cancer in their lifetimes.

Jeanne has been keeping up her go-go-go attitude throughout her journey, and is thankful she has been able to work throughout her chemotherapy sessions, in addition to maintaining her social life: checking out the new W Hotel with Iain, taking in an Elton John show and receiving a Lifetime Achievement Award at the Women’s Empowerment Awards in September.


“I’ve got this opportunity and this platform to let other women know how important it is to go for regular mammograms. Cancer is not a death sentence anymore; for me, it’s more of a healing journey with every treatment and every strand of hair that falls out of my head,” she says.

Jeanne is already well-versed in fundraising for cancer, having been on the honorary board of Gilda’s Club since it debuted in Toronto in 2001, which is especially meaningful to her now. This fall she was heavily involved in CIBC’s Run for the Cure, which took place on Oct. 2, in addition to working with Princess Margaret Cancer Centre on their fall campaign.

“There’s so much comfort in sharing the most precious gift that we can give each other — our own personal stories,” Jeanne says. “This is what you grow from; this is what you learn from.”