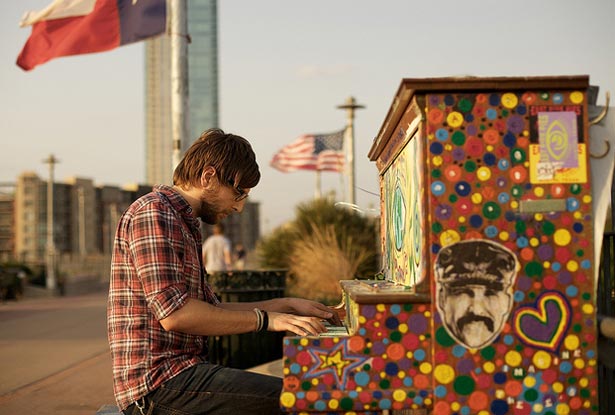 Toronto’s streets are about to get a lot louder. Tomorrow, 41 street pianos will be placed around the city as part of an art installation leading up to the 2015 Pan Am games. The global Play Me, I’m Yours project — dreamt up by British artist Luke Jerram while he separated his whites from colours in a laundromat — aims to “provoke people into engaging, activating and claiming ownership of their urban landscape,” he says.

Whether it’s at the laundromat or a streetcar stop, Torontonians don’t exactly like to interact with one another. Jerram hopes to help the situation with his project, which has reached cities such as Sydney, New York and São Paulo.

“Within a city, there must be hundreds of invisible communities, regularly spending time with one another in silence,” he says.

The exhibit kicks off today with a free concert at David Pecaut Square, after which the brightly-decorated pianos — inspired by local artists with connections to the 41 Pan Am countries — will be transported in trucks to various locations across the city. That includes the Distillery District, the CN Tower, Pearson Airport and even aboard the Toronto Island ferry (which will host a player piano with Barry Manilow playing on a loop).

Passersby will, of course, be able to showcase their talents, but you’d better tickle the ivories before it’s too late: the pianos will eventually be donated to local schools and community groups on July 31.

While we expect plenty of renditions of “Heart and Soul” and “Chopsticks,” we’re hoping to uncover some hidden talent, such as this mini-Mozart, who totally slays the keys.