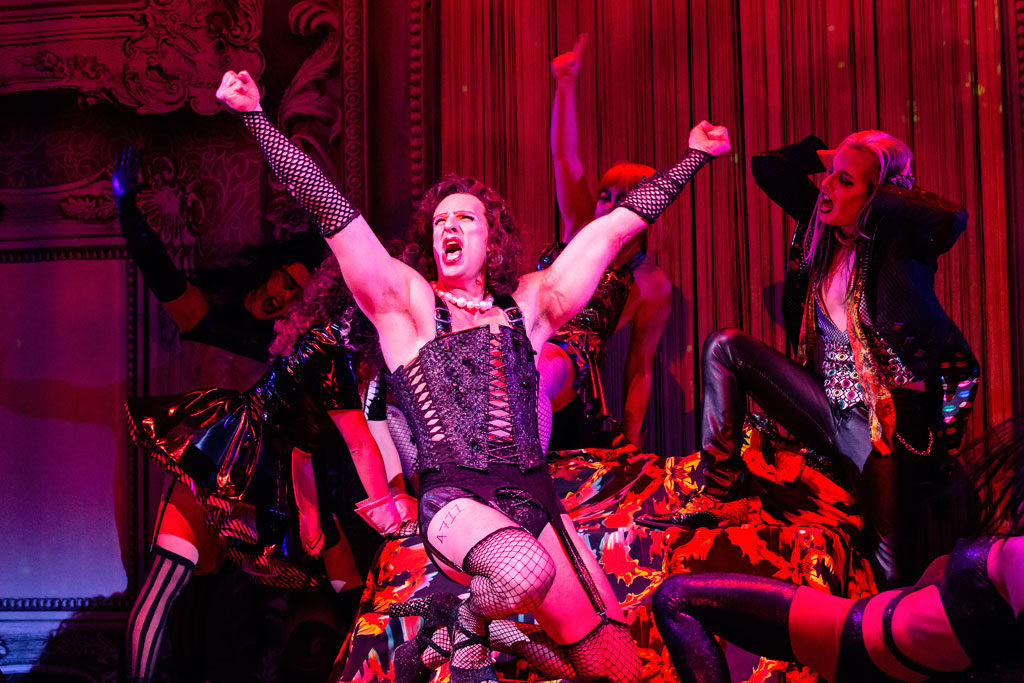 When you sink into the plush seats of the Avon Theatre in Stratford, Ont., surrounded by a sea of silver-haired theatre-goers in the middle of the afternoon, the sexed-up, raunchy production of the Rocky Horror Show is about as far from the expected as you’d imagine. And that’s really the fun of it.

With Toronto actor Dan Chameroy in the lead role, the Rocky Horror Show is a runaway hit and has been extended until at least the end of November.

Looking for a perfect Halloween road trip? Take a step to the left, and then a jump to the right, and do “The Time Warp” straight down Highway 401 to the sleepy theatre town best known for presenting the works of the Bard and parading honking swans about town like pets.

For those uninitiated to the rituals of the Rocky Horror Show, the musical was originally created by Richard O’Brien and premiered in 1973 in a West End theatre in London, England. So, it’s always had that plush seat thing.

The show hit Broadway in 1975, the same year that the film version premiered. The Rocky Horror Picture Show famously starred Tim Curry as the latexed and fishnetted Dr. Frank N. Furter. It was the era of Rocky Horror.

As a result of its audience participation element, where people are encouraged to shout out and throw things with reckless abandon, as well as its senseless but decidedly sexy fun, the film was a cult hit and continues to play to audiences in many major cities around the world, including Toronto.

Invariably, with each screening a shadow cast of actors appears onstage to kinda sorta act out the play and encourage audience participation.

This spirit of participation is alive and well in Stratford’s stage version. As the story goes, the mad transvestite scientist Dr. Frank N. Furter sets about creating the perfect man “with blond hair and a tan,” who is good for relieving his … “tension.”

When the oh-so-innocent young couple Brad and Janet happen upon the doctor’s abode, certain sexual shenanigans take place, mayhem ensues, and it all ends up, like most theatrical works, in a frenzy of chainsaws, aliens, Nazis and rock and roll.

There are literally dozens of opportunities to join in the fun; although, at Stratford, it is a little more controlled with people planted in the audience to holler at appropriate times.

“So I went in under her guidance, her tutelage and her clothing, basically, to audition.”

There are cleverly packaged participation bags available in the lobby that include a few essential items approved for use. Ahem.

Chameroy, an Edmonton native, moved to Toronto upon landing a role in a Mirvish production of Les Misérables. Also in the company were Michael Burgess, in the lead, and Chameroy’s future wife Christine Donato.

“I’ve always loved to perform, “ Chameroy says. “I didn’t really choose acting, it chose me. I can’t remember not wanting to do it as a child.”

In his teens, he started singing and doing quite well in vocal competitions, back before there was American Idol or The Voice, so he was a natural for musical theatre.

At present, Chameroy is perhaps best known around town for his hilarious turns as Plumbum von Botox, in the popular Ross Petty holiday pantomimes, and as Miss Trunchbull is a recent hit Mirvish musical production of Matilda.

“I rejoice in these crazy parts. I don’t care what it is,” says Chameroy.

He’s spent many a season at the Stratford Festival — 12 and counting — and when the time came to have a look at options for the current season, he was particularly drawn to the Music Man, another smash production this season, which was also extended.

“I was like, ‘Hmm I think I should do Music Man. It would be a good fit for me, and I was quite eager,” he says.

“And then they called and said do you want to audition for Rocky. I didn’t know what to think. It wasn’t really on my radar at all.”

Chameroy was not formally indoctrinated into the Rocky Horror cult. Luckily, his wife talked him into it.

“She thought it would be a fun experience for me and a challenge,” he explains. “So I went in under her guidance, her tutelage and her clothing, basically, to audition.”

The anthemic rock score took some getting used to for Chameroy, who was used to a different kind of musical theatre.

Nonetheless, he seized the day and his “sweet transvestite” role with characteristic zeal and has been pleasantly surprised by the show’s success.

“I did not anticipate what was going to happen. It’s not your typical Stratford fare,” Chameroy says. “The crazy wackiness of Rocky, with the audience participation kind of experience, I don’t think they’ve done anything like that before.”

It helps that the production is helmed by Donna Feore, acclaimed director and choreographer. In addition, the cast includes some young vocalists that are nothing short of stunning, including Robert Markus as Riff Raff and Kimberly-Ann Truong who absolutely sparkles as Columbia.

“There is not one person in the show that isn’t pulling it off vocally,” says Chameroy.

“Not to toot our own horns, but I don’t think anyone will be disappointed.”