The rise of Rachel Skarsten, Hollywood’s next it girl - Streets Of Toronto
Skip to content 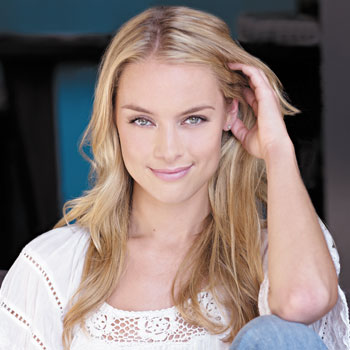 Most of us never get a crack at Hollywood, but Rachel Skarsten is already on her second big break. At age 27, almost 10 years after leaving Tinseltown to focus on her academic career, the Bayview native is making a name for herself — both in Los Angeles and back home in Canada. A mundane life was just not in the cards for Skarsten.

Speaking from Toronto, where she’s currently shooting two Canadian television series, Skarsten is articulate and animated as she describes how she fell into acting as a child and then rediscovered it in adulthood.

“I never naturally gravitated toward acting in grade school or high school,” she says, “but now I’m starting to see I’ll probably be an actor forever.”

Like so many child performers, Skarsten’s early career was launched by an unexpected phone call from an agent. Yet there’s a sad twist in her narrative: Skarsten’s story begins with the sudden loss of her father to cancer when she was only nine.

“Losing my father was absolutely devastating, but we all have our crosses to bear,” she says resolutely, before explaining how the family calamity indirectly led to her first acting gig. A televised tribute was planned to honour her father’s work as a psychologist, and Skarsten was asked to sing.

Her TV appearance was followed by the agent’s call — “Your daughter would be great for acting” — and with the choice left up to her, Skarsten opted to head out on her first audition.

“It was for a Honeycombs commercial. I was such a newbie and had no idea what I was doing, but somehow I booked it,” she says.

By her teen years, Skarsten was an accomplished competitive hockey player who happened to have acting credits under her belt such as TV’s Little Men and the feature film Virginia’s Run. Her priorities were clear. “I always had to do acting on the side because it was important to our mom that my brother and I not only complete high school but go on to higher education.”

Despite this effort to remain grounded, Skarsten couldn’t refuse an offer from the WB network for a role in its new show Birds of Prey. “I sent the director an audition tape I had made one day after school,” she recalls, “and the next thing I know, they’re welcoming me to the WB.” Skarsten had officially landed her first major leading role at age 17. But full-time taping in L.A. and full-time school in Toronto were not exactly compatible endeavours. An incredibly hectic time followed, with endless flights between the two cities, on-set tutoring and a measly 13 actual in-the-flesh days at school. Somehow, the work had consumed her life.

“In my mind, acting had just been another extracurricular activity,” she says. “I didn’t realize I had signed an adult contract with adult expectations and adult commitment.”

When Birds of Prey was done taping, Skarsten made her first adult decision. She worried that if she accepted any of her L.A. job offers she would be sucked into the business and never complete the schooling that was such a priority.

“I really did feel like I missed out on high school, and it was very important to me to have the experience of university at an age-appropriate time,” she says. So just like that, she turned her back on acting and headed to Queen’s University to study history and literature.

“I would love to do more films like Two Hands  to Mouth. It was so artistically thirst- quenching.”

What does a former child actress do with a B.A.? Get a job, of course. And then another and then another. Back in Toronto and living at her mom’s house, Skarsten cycled through a series of dissatisfying gigs, including a stint as manager of Abercrombie & Fitch in the Eaton Centre.

“I think I was aspiring to become a retail mogul,” she jokes. Somehow that didn’t pan out.

Skarsten was aimless and lost. “I said to my mom, ‘I’m so bored! I don’t know what I’m doing. I need an adventure.’ ” And Skarsten’s mother, in a flash of parental intuition, responded simply, “Why don’t you just go back to L.A.?”

One week later, Skarsten was in her car heading south. This time around, Hollywood was not quite so welcoming. “It had come so easily when I was younger, but in L.A., five years away is like a lifetime,” Skarsten says, recounting the uphill battle she fought to resuscitate her career. “I was living on a cash-in, cash-out basis. I really had to pound the pavement and put myself out there.”

In between auditions and meetings with casting directors, Skarsten even cleaned houses to keep afloat, and she reaped the benefits of her labour. She scored bit parts on shows and in TV movies, getting herself noticed all over again.

Then just this year, she landed a major role in Canadian writer-director Michael DeCarlo’s soon-to-be-released independent movie Two Hands to Mouth, a dark comedy about an exclusive dinner at a restaurant that goes terribly awry, forcing guests to defend themselves and their morally bankrupt lives.

When Skarsten went in to audition for the part of Leah, a lovesick dinner guest, she was taken by DeCarlo’s passion.

“As I was auditioning, Micheal stopped me and then stepped in to take over from the reader to run through the lines with me himself,” Skarsten says. “He pushed me to go much further in my interpretation, and I thought to myself, ‘This is someone I really want to work with.’ Thankfully, he felt the same way.”

The experience of making the movie was accordingly challenging but rewarding. The small ensemble cast spent the entire shoot together, filming the majority of their scenes in one room and staying on the same floor of a Hamilton hotel.

“It was a very intense month, but I came away from it with some dear friendships,” says Skarsten, “and I would love to do more films like Two Hands to Mouth because it was so artistically thirst-quenching.”

After cutting her teeth on that experience, Skarsten is back in Toronto busy with Lost Girls and The L.A. Complex. Unsurprisingly, in both shows she is portraying powerful (if malevolent) women. “Lost Girls’ Fae Tamsin is brash and lacks any social graces but she’s also funny and bold,” Skarsten says.

“On L.A. Complex, Roxanne is manipulating one of the main characters for her own purposes, but she also cares for him, so I have to play her as sincere yet calculating.”

Since both shows tape at the same time, Skarsten has her two hands full jumping between characters and sets, but she still manages to eke out some quiet time at her local bookstore.

Above all, she’s looking forward to the future, having gained an appreciation for her work that she never before felt.

“Even though I was dirt poor when I first returned to LA, I really honed in on my true desire: I realized acting was what I wanted to do. And after working so hard to get here a second time, I feel immensely grateful.”