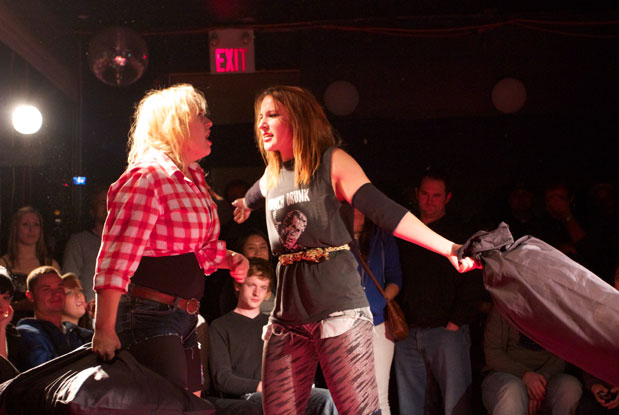 This Saturday night, the rockin’ Lee's Palace will get in full girlie-rumble mode with the return of professional pillow fighting league Bedlam: All Girl Pillow Fight Revue. We caught up with one of the founders of the new league, Crystal Clear (yes, that’s a stage name) to get the inside scoop on all the queen-sized action.

When was Bedlam founded and why? Is there any connection to the other league of pillow fighting?
Bedlam pillow fighting was founded in April of 2011. The three Bedlam co-founders all have a background as professional pillow fighters, and we wanted an outlet to express our ideal of pillow fighting. We believe that pillow fighting should be presented as a well-rounded entertainment experience, and while we take the sport very seriously, it should embrace the kitsch factor as well. Hence the term revue, and the incorporation of supporting acts into the show. The founders of Bedlam were involved in the “other” pillow fighting league that used to operate in Toronto, which (last we heard) is currently not running. We remain on good terms with the manager of that organization.

Honestly, do people go just to see babes bashing each other with fluffy pillows, or is there more to it?
People may come for the babes, but they stay for the excitement, skill and showmanship. It would be easy to put a bunch of bimbos in lingerie and have them roll around. But that's a one trick pony. It would never generate a loyal following. That's why we make sure to only accept fighters who are intelligent and have a force of personality is addition to physical skills. The girls are trained in all sorts of different techniques to keep the matches interesting. We make sure to get the girls on the microphone as well to give the audience a chance to get to know them as well.

Does the action ever spill out into the crowd?
We have our “boys,” as we affectionately call them, who man the edges of the mats during fights to catch the fighters if they fall off the mats and to keep the crowd safe from the fighters as well! They don't always succeed — the first few rows are definitely the splatter zone.

What will we be seeing on Saturday night?
Saturday night will include a full card of fights, with a great mix of new and seasoned fighters. We've set a great fight card that's designed to bring out the best in all of our fighters and are expecting some stellar match ups. We try to mix up fight styles and level of experience to keep all of the fighters on their toes. We also have some guests who will be joining us, including a drag queen, dancers from Great Canadian Burlesque, Mysterion the Mind Reader and a stand up comedian.

How many competitors will be taking part?
There will be 10 fighters in this show.

What is the headlining match? We're pitting Shania Payne against Pummelina for the main event. Pummelina is not only one of our feistiest fighters, but also by far the smallest, while Shania has a significant height and weight advantage. So we expect this to be quite a David versus Goliath match up.

What are the basic rules of pillow fighting?
Each match is officiated by a trained referee. Matches are won by pin or submission. Occasionally a fighter may also be disqualified. All moves are considered legal as long as the pillow is in play, and pins are only legal if there is a pillow used to perform the pin. Fighters use moves above and beyond simply swinging including takedowns and strikes, all incorporating the pillow into the action.

Is there a certain regulation pillow in terms of size and stuffing?
Yes, all pillows are queen pillows, polyfill only. All pillows are supplied by Bedlam and inspected by the referee prior to each fight.

What is the worst pillow fighting injury you've encountered?
Bedlam has yet to have a serious injury, we're proud to say. We take the safety of our fighters very seriously, and that's part of why we make them train so extensively. How to protect their bodies and the bodies of their opponents is taught right upfront, and anything that jeopardizes the safety of another fighter is not tolerated.

What hopes and dreams do you and your cohorts have for Bedlam?
Our mission statement is world domination. Seriously. We're aiming to make Bedlam a household name. In addition to growing our presence through our own live events, we're also doing guest appearances wherever we can. We would like to expand to television as well.

If one was so inclined, what is the best route to professional pillow fighting status?
We regularly hold open tryouts, and are always looking to add fighters to our roster! We'll be holding a tryout on Jan. 21, 2012. (Email propaganda@bedlampillowfighting.com for more details).

And do you have more matches slated for the coming months?
We will be holding another event in the spring, but the details are not yet confirmed.