The original Harvey’s restaurant has been demolished; nobody cares - Streets Of Toronto
Skip to content 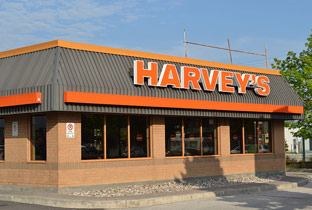 The world’s first Harvey’s restaurant, which was built in Richmond Hill in 1959, has been torn down to make way for condos. And according to the National Post, not too many people were up in arms at the prospect of losing the place.

“Not too many people showed up to express their concerns,” Richmond Hill Town Councillor Nick Papa told the Post. “I didn’t hear a peep, I didn’t hear anything about it.”

Considering Toronto’s love for hamburgers, we figured at least one die-hard would have lain in front of the bulldozer.

Now that the non-landmark is out of the way, the site at Observatory Lane and Yonge Street will eventually be home to two 15 storey condos.