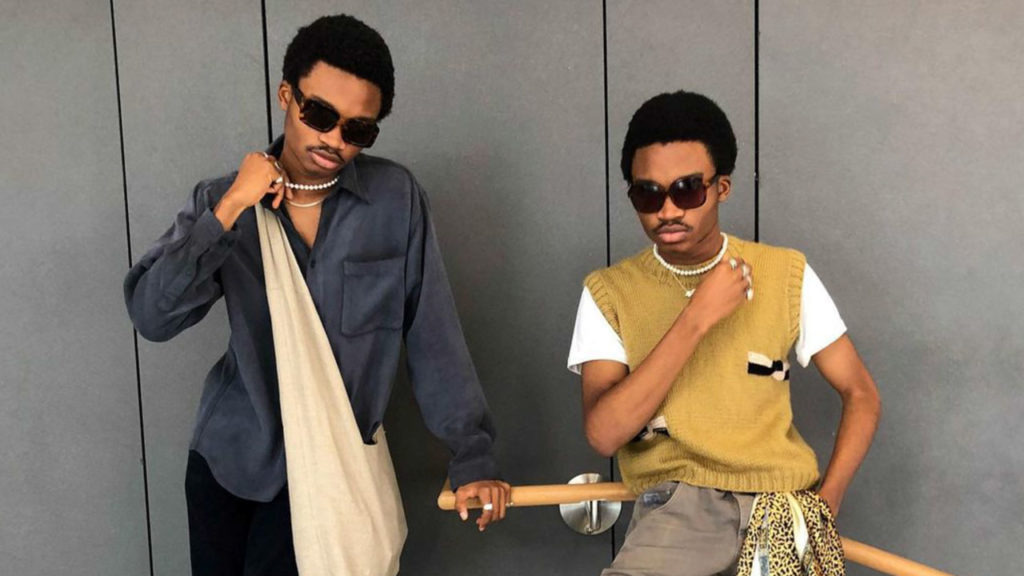 If you happen upon Uwakmfonabasi Nyong and Uwakmfonabasi Mokutimabasi Nyong’s Instagram (also known as Whak and Mo, respectively), the first thing you’ll see is their bio: “Shifting Paradigms.”

A quick scroll through their photos will prove exactly what they mean by that.

When the Nyongs moved to Canada from Nigeria in 2015, the twins’ first exposure to being in front of a camera was just in their cousin’s backyard. Armed with a new camera their cousin had received for her birthday, they took photos “just for fun” and posted them on Instagram. The pair say they received compliments on their photos all the time from classmates in high school, and they quickly amassed Instagram followers under the catchy nickname, Whak and Mo.

“We went from shooting with our cousin to working with random photographers in the city, and we really grew our portfolio from there,” Whak says.


It’s their active and unconventional social media presence that got them scouted by their current agency, Next Models Canada, one of the biggest modelling agencies in Toronto. The duo was declared Best Dressed by the Globe and Mail’s annual Best Dressed list in 2021, and a recent shoot they did with artist Jorian Charlton was featured on a massive 70-foot-tall art installation in the Financial District as part of Toronto’s ArtworxTO project.

Instagram modelling is changing the face of the industry

The twins suggest that being scouted on Instagram is a reflection of the future of the modelling industry as a whole, one that is leaning away from a models-as-mannequins ethos and toward a desire for models with their own personalities.

The key to Instagram scouting, too, is that prospective models can take a different and notably more accessible path into the industry. Modelling previously would have been a realistic career path for only a select few, namely those with enough wealth to do largely underpaid or unpaid work to build up their portfolio before being noticeable enough to be scouted, or nepotism babies (read: the Hadids, Kendall Jenner). But as more modelling agencies are looking to social media presence and personality to scout new models, a noticeably more diverse generation of models is forming.

It’s a long overdue development in one of the most notorious industries for touting rigid beauty standards that exclude almost anyone who is not white, thin, cisgender, older and non-disabled.

“We had the supermodels of the ‘90s, and then I feel like we got to a point in the 2010s where models became like mannequins again,” Whak says. “Now we’re having a resurgence of models having personality. The world wants more than people with a pretty face.”


Tré Akula, a model with Niwa Models in Toronto, says that she’s recently been able to use modelling as one of her most secure streams of income. That has come with more control over her career and where she wants to take it.

“For me, that kind of took me out of the passenger seat and put me into the driver’s seat. I’m steering my own career,” she says.

Models in the past might have felt obligated to effectively be mannequins out of a desire to keep their careers moving forward. But the consequences of being seen as objects first, people second are obvious — placed in uncomfortable scenarios or facing discrimination, they would feel the pressure to keep quiet and just deal with it.

“In the past, I would go on set and it would be a majority white people and that would make me uncomfortable thinking about how they might be expecting me to act as a model,” Akula says. “Now, I can make the choice to step onto sets where I feel more seen.”

But Akula says the pivot toward diversity is, in some cases, a calculated move. “I think what’s happening right now is that it’s very trendy to be diverse. What happened with the pandemic and all these big brands and companies being called out, I think a lot of people are being very strategic about trying to be diverse and inclusive,” she says.

Akula says she can count on one hand the amount of times she has arrived on set for a shoot and the hairdresser there does her hair. “People can go to school for this and get their credits without ever having to work with Black hair,” she says.

The Nyongs have had similar experiences as well, noting that the industry has “a long way to go” beyond model diversity. “The more diverse the models are, the more diverse the teams should be, but that hasn’t been the case,” Mo says, referring to hairstylists, photographers, directors and everyone else behind the camera.

Agencies are looking to recruit the cool kids with personalities

This awareness of diversity in front of and behind cameras is ultimately a step in the right direction. Newer models are allowing themselves to “be their own bosses” and advocate for themselves, resulting in a greater sense of self — something agencies are actively looking for.

The Nyongs say their agency is looking for something specific as they recruit new models — the cool kids.

What’s a cool kid, you ask? The Nyongs say it’s people with a real sense of style and a passion for fashion.

“Most of the newer models we know, they were fashionheads first before they even started working,” Mo says.

“We actually care about the clothes, and we’re friends with the designers. There’s more of a genuine connection than I think there was in the past,” Mo says.

Opening up the industry to “fashionheads” has also expanded the definition of a model and, crucially, has begun to include a more diverse range of faces and bodies.

Akula, who moved from Vancouver to Toronto over a year ago, notes that this is a major difference she’s seen between the two cities. “There’s more diversity in Toronto and there’s also more people of colour in higher places,” she says. “There’s still a lot of white people in powerful positions, but I find that there’s at least someone holding the gate open for others of colour to come in.”

But Brittnee Blair, a plus-sized model who has been in the industry since she was as young as seven and has modelled in both Canada and the U.S., says that diversity in Toronto is limited in some ways, at least in comparison to cities like New York.

“The reason I went to the U.S. is because, to this day, there aren’t a ton of plus-sized brands that hire curvaceous models,” she explains. “I think Canada still has that high-fashion mentality, that there has to be a certain look and a certain size to a model.”

Of course, the industry as a whole has certainly come a long way from even just five or 10 years ago. This year, Aaron Rose Philip, the first Black, trans and disabled model to sign for a leading agency, made her runway debut for Moschino. Precious Lee broke barriers as the first plus-sized model, along with Jill Kortleve and Alva Claire, to ever walk the runway for Versace in 2020. And although the examples are still few and far between, individual agencies are taking notice and attempting to diversify their rosters from the start.

Toronto-based model Mars Alexander was signed this year to one of the first dedicated non-binary rosters in North America with B&M Models, a sign of a slowly shifting awareness of the need for gender diversity.

Alexander, who is trans and uses they/them and she/her pronouns, says they originally felt unwelcome in the industry as a young queer person who didn’t see herself in the fashion models on screen.

“But when I entered the industry, it was kind of a moment of clarity for me because it was around the time diversity was becoming a real conversation, and I thought maybe I could actually do this,” they say.

Alexander credits this new conversation to an acknowledgement of a constantly expanding definition of beauty.

“People are generally realizing that there’s such a wide lens to beauty, more than just skinny, tall, cis white people in weird positions,” they say.

“As long as we keep pushing for diversity, navigating this industry won’t be as difficult as it was for people as opposed to maybe three, four years ago,” Alexander says.