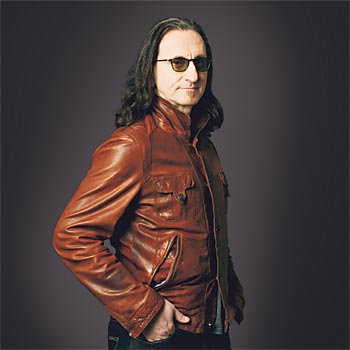 First, Zeppelinesque in the basements, bars and school auditoria; then on to dragonrock and early progist workouts; next: the lean muscular hardswing of the middle ’80s; then “Subdivisions”; and now, the biggest Toronto band, if not one of the biggest and most venerable anywhere in the world.

Geddy Lee plays bass in that band, and here’s how his instrument sounds: like a bearded giant thumbing a timber-neck of mangrove roots; like the rhythmic bubbling of a great iron cauldron; like the rumbling subsonic belly of a jet airplane taxiing across a hot asphalt runway. Look, honey, there’s Geddy!; no, he’s there; no, he’s there.

Geddy is around, which makes him doubly interesting and important. The streets are his and his band’s, but instead of moving into a Scottish castle or gated Florida Key or Umbrian monastery, he and Alex remain in Toronto (Neil only occasionally remains). In this regard, musicians young and old will come across him in the fullness of the Ontario light and think to themselves, “He stayed, so can I. I’m not going anywhere, dammit.” And so they do.

Toronto is good and Rush are great, and as the city grows lively and distinguished at once, so does this former Willowdalian rock band, whose musical life has seen one renaissance after the next. A generation gets born, and they discover Rush. Repeat. Rinse. Repeat.

Children are herded into three groups, and those aspiring to sing in multiple octaves while playing polyrhythmic low-notes while stomping at a giant plastic piano while expressing post-modern lyrics while jumping on the spot are herded directly to Geddy. He greets them with a smile and a knowing glance. That’s the thing, too. Great person. Great musician. You and I are worthy. He would see to that.