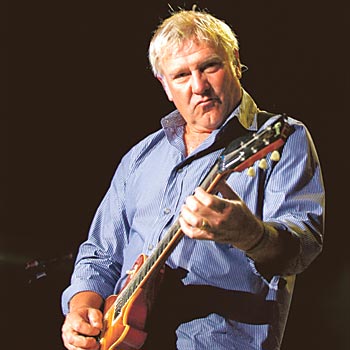 My fingers hurt, but it was worth it. I think. I remember All the World’s a Stage opened gatefold- up on the carpet of Johnny Wersta’s parents’ living room — or mine — with maybe a glass of lemonade staining the coasterless table and the two of us sitting on our crappy amps facing each other trying to study Alex Lifeson’s playing.

The tone arm raised, then set down again, perfectly, on the bendy part of one of the album’s wickedest runs — shweem!! kweee!! shmauwww! — and me and Johnny tilting an ear, trying to feel our way along the neck until we found the right note, or at least thought we’d found it because, the truth is, we were hardly ever right.

On Saturdays, we’d escape to the small rooms at the back of the strip mall music store, where ’70s stoner music teachers showed us what we were doing right — or wrong: we were mostly wrong — and how Alex had actually kerranged when we’d keblanged; how he’d finger-pulled when we’d finger-pushed.

They were epic, those licks, and so, an army of guitarists — some great, some terrible, but most of us in between — were made. When the great God of the Les Paul — or the white Gibson doubleneck, coolest axe ever — leaves us, his tombstone should have a motion sensor so, when you approach to pay your respects, the riff to “Closer to the Heart” tickles the air.

Of course, you could choose others: the mock-narcissism of “Spirit of Radio” ’s famous shred, the weeping solo in “La Villa Strangiata,” the stuttering clarion of “Limelight,” and pretty much all of “YYZ.”

I only recently was able to fight my way through the bulk of “Subdivisions,” Rush’s great epic suburban elegy. My fingers still hurt, but it was worth it. I think.