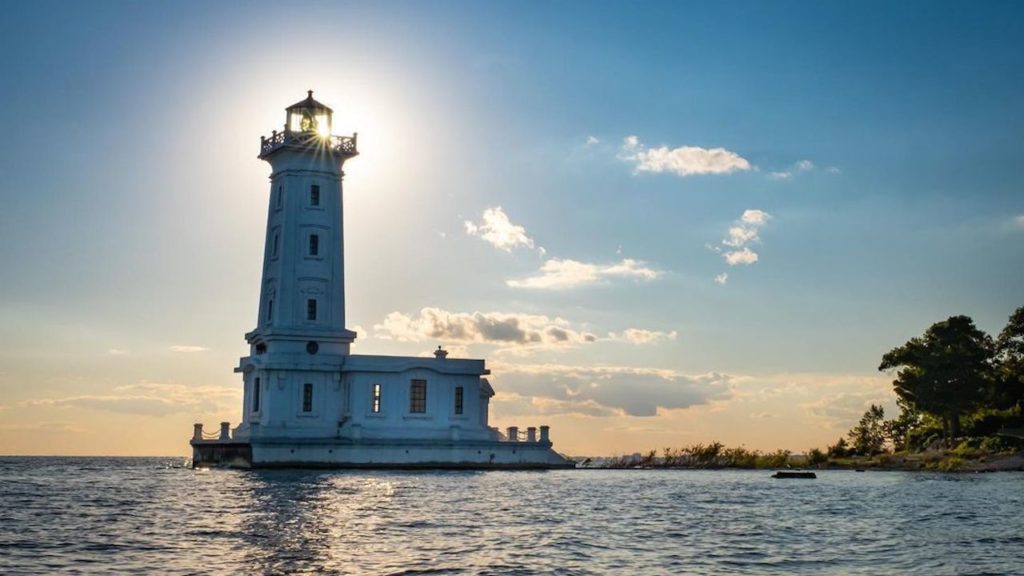 One might think that you need to travel many miles east to enjoy the rustic charm of lighthouses, but they’d be wrong. With over 100 lighthouses dotted across Ontario, there’s plenty to see right here — and these nine are perfect for getting started.  These lighthouses can be the destinations or just stops along the way on your next road trip, but one thing’s for sure – you won’t be able to resist taking a whole bunch of photos!

In response to a tragic storm that took many lives, the structure was built in 1917 and guided ships through the rocky waters for nearly 80 years.

Explore the grounds and marvel at its Greek Revival architecture and its stately presence or book a tour and see the inside.


Charming Kincardine Lighthouse will make you feel like you’re on the east coast. Located on the Penetangore River in the picturesque town of Kincardine, this classic red and white structure (circa 1881) is a town treasure.

Between Canada Day and Labour Day, visit the marine museum situated in the lightkeeper’s house or check out the fantastic Lighthouse Blues Festival held every July.


As its name suggests, the towering limestone base of this 200-year-old St. Lawrence River lighthouse was once a windmill and the site of a gruesome uprising in 1838.

Transformed into a lighthouse in 1873, this 62-foot-tall beacon proudly kept watch over passing boats for the next hundred years and is now a favourite spot among ghost hunters and tourists who pass through Prescott.

Visit the lighthouse’s Facebook page for opening dates, and when you go, check out the Windmill Brewery nearby.

Although the tower isn’t open to the public, the gorgeous scenery surrounding this white and red clapboard lighthouse makes it a popular destination for tourists and also divers looking to explore the many shipwrecks nearby.


Surrounded by tall evergreens and perched atop a rugged cliff high above the waters of Lake Superior is the impressive Battle Island Lighthouse.

Accessible only by boat from the Northern Ontario town of Rossport, this solitary lighthouse post has dutifully lit the way for ships for generations.

Although the tower is closed, guided zodiac tours and kayak adventures to the island make for memorable adventures.


Believed to be the oldest lighthouse in Ontario, Toronto Island’s infamous Gibraltar Point Lighthouse (circa 1808) is full of lore — and great views.

Best known for the mysterious demise of its first lightkeeper, J.P. Radelmüller, who disappeared in 1815 in an assumed murder, the lighthouse is listed as one of the most haunted places in Canada.

Although the tower is closed, it’s still well worth exploring. Rent a bike (or quadricycle) and see the lighthouse up close.

One of six identical white stone lighthouses that once made up the imperial towers of Lake Huron, the beacon has stood tall since the 1850s.

With a small museum and excursions that ascend 114 steps to the top of the tower for spectacular views and sunsets, the lighthouse welcomes visitors during the summer months.


For a haunting experience, there’s nothing quite like the abandoned Mohawk Island Lighthouse, whose barren structure juts out of Lake Erie’s blue horizon.

Situated near Dunnville, this former lighthouse (circa 1848) was abandoned in 1968 and has since become a nature reserve for migratory birds.

Visiting the island is difficult unless you’re an experienced kayaker, but a boat ride past the island will give you some outstanding photos.


Built at the turn of the last century, the white and green of Port Dalhousie’s lighthouses have become a cherished regional landmark, with the octagonal one replacing an older model destroyed by lightning.

A favourite spot for weekend strolls, the Dalhousie pier offers delightful views of the boat-dotted lake and picture-perfect lighthouses. What’s more, it’s a great spot to capture some atmospheric photos.