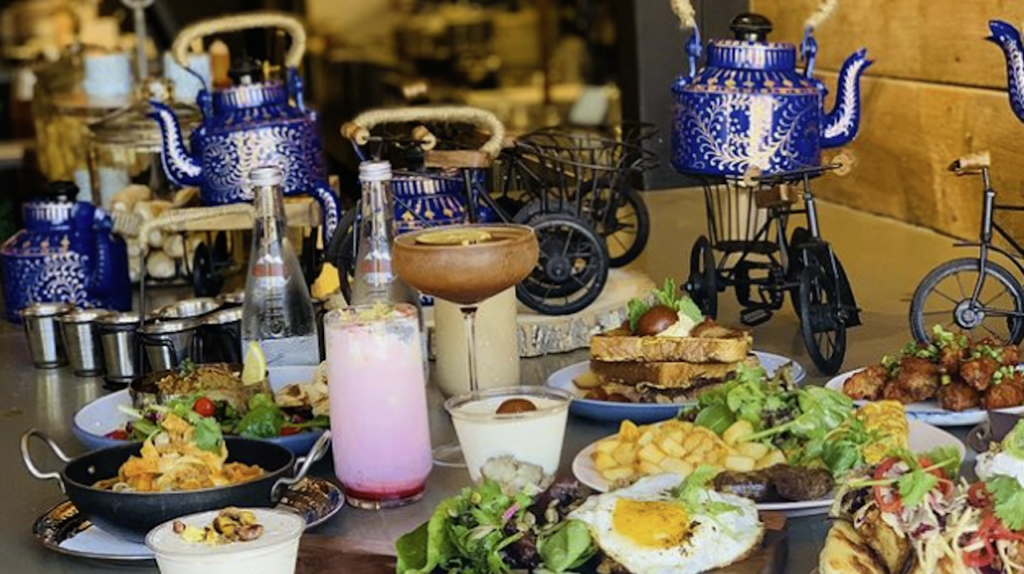 The Kettle is a new Halal restaurant serving up everything from kebabs and curries to wings and pies. The name is meant to represent the very important Chai tea culture in India which, known as chaat, is often purchased and enjoyed alongside street food eats. The upscale vibe of the new spot melds Indian street food with Canadian comfort food classics in a cool interior typical of Queen West haunts – think exposed brick, shiplap-lined walls, low light and leather bench seating. The new spot, which officially opened its doors on May 7th, is owned and operated by two food industry veterans and friends, Sana and Faiz.

“We’re the first in the city to do a Halal Canadian-Indian fusion brunch that we know of,” says the duo, who serve a weekend-only brunch menu from 11:00 a.m. to 3:00 p.m. “Patrons can dine in, we have room for 40 inside and are currently working on a patio which we hope will be open by July.” The vibe is modern and tasteful with a blend of Canadian and Indian music to complement the menu offerings, like flaky layered parathas (traditional Indian flatbread) with curry & chaat.


Skip the flight to South Asia and try the Mumbai Bhel chaat, which is made from puffed rice, tomato, onion, chili and coriander. If you’re looking for something a little more familiar, Samosa Chaat might be more your speed. It’s deep-fried and filled with masala potato, mango, house-made chutney and sev, which is a popular Indian snack food consisting of small pieces of crunchy noodles made from chickpea flour paste, seasoned with turmeric, cayenne, and ajwain before being deep-fried in oil.

For an Indian twist on Canadian faves, try the Butter Chicken Burger – a crispy fried chicken breast tossed in The Kettle’s butter sauce. Or the chicken kabob burger topped with mint mayo and crispy fried onion and served on a soft brioche bun. The meat pies are also a hearty option, with your choice of beef, butter chicken and vegetable curry, all encased in a super buttery, flaky crust.

The Kettle will be taking part in Toronto’s Summerlicious event, which gets patrons access to a special prix fixe menu featuring brand new menu items including Indian British dessert and smoked chicken curry.

“We’re excited to introduce Toronto to this new fusion, offering street-food style dishes with the bold flavours of India, in a Canadian way,” the duo says.

The Kettle is located at 685 Queen Street West.