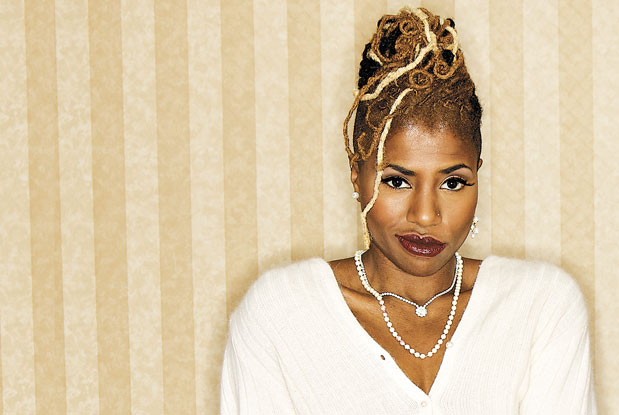 Saidah Baba Talibah is a musician who defies definition. An enthusiastic swimmer in Toronto’s cultural melting pot, the Bayview-raised singer muscled her way into the spotlight in 2011 with (S)Cream, her well-received debut album that drew from funk, soul, rock, blues and everything in between. That same year she won Toronto’s first SoundClash Music Award.

A flamboyant live performer with striking looks and a voice to match, in mid-June Talibah will be appear on the Luminato mainstage when she opens for fellow genre-hoppers TV On The Radio.

But first she has a problem to solve. A culinary problem. “They’ve asked me to work with a chef to create something to eat for people passing by,” says the singer, who has recently returned from a mini-tour of Australia where she played Byron Bay Bluesfest. She is one of 10 artists who will be collaborating with chefs to produce dishes to feed festival-goers at Luminato’s main hub in David Pecaut Square.

For someone whose music blends a wide variety of influences, it’s little surprise that fusion food is where she wants to head. With a family heritage that takes in St. Kitts and Nevis, New Jersey and the Deep South, she’s hoping to find a way to bring tastes from all three together on the plate. When we spoke on the phone in mid-May, she hadn’t yet figured how to do that, but she said, “I love to cook, so it’ll be fun.”

In talking to Talibah, you get the feeling that much of what she does is founded in that taste for experimentation and discovery.

Ask her about the musicians that she grew up listening to, and she’ll rattle off a list that runs from Jimi Hendrix, the Rolling Stones and Joni Mitchell to Michael Jackson. She refers to some of her live performances as “channeling new school Betty Davis 2.0” and locally has opened for Swedish electro group Little Dragon and, at the Toronto Jazz Festival, performed with Bootsy Collins. Talk about great musical cities, and she’ll cite Toronto, and Winnipeg and Montreal.

The list goes on, punctuated by frequent peals of laughter as she remembers some story or another artist she likes pops into her head.

She is very much a native in the land of music. It is, after all, virtually stitched into her DNA. She is daughter of Grammy-nominated singer Salome Bey, sometimes called “Canada’s first lady of blues,” and counts jazz singer Andy Bey among her uncles. Talibah says she was born into a family mad about music.

“Music was always in my household; being creative was in everything we did,” she remembers.

Many of her jazz influences come from her father, Howard Matthews, who co-owned the First Floor Club near Yonge and Bloor. The after-hours club became a favoured place in the 1960s for jazz and blues performers visiting Toronto, to jam after their concerts.

The route from home to stage was a direct one for Talibah. Growing up in the 1980s — what she calls the “age of fame” — Talibah quickly decided that she too wanted a slice of the limelight. She started attending Claude Watson arts school before her family decamped from their downtown home to a place near Sheppard and Bayview where she attended Earl Haig Secondary School.

Talibah recalls her North York days with fondness but says they were a time to focus on learning the craft of music and performance. As a teen, it was the brighter lights of downtown that called to her.

For Talibah, Toronto remains an incredibly exciting place to live and make music. She calls the city, with its diverse communities and love of music, an “incubator” for creativity.

A huge fan of the social side of exploring music — she speaks affectionately of the time when people used to make mix tapes for each other — she enjoys the ease with which one can discover a new artist through a friend’s recommendation or just by happening across their music.

But she admits there’s another, tougher side to Toronto. With huge names in the world of music trooping through the Air Canada Centre every other week, the city is spoilt for choice, and performers have a lot of competition. Although this town is a supportive place, she says, an artist still has to win over a crowd.

Currently working on her second album, Talibah is trying to tap into that support to help her navigate the tricky waters of the sophomore release. Instead of writing a bunch of songs then agonizing with producers over which should make the album, she is essentially crowdsourcing the track list. She’s in the process of making three EPs, which will be available to fans via crowdfunding site PledgeMusic, which has also been used by the likes of Rufus Wainwright. Then, she will ask them to vote on which should make the album.

Talibah believes that, in the rapidly changing landscape of the music industry, this kind of interaction with audiences is crucial. “It’s about breaking down that fourth wall, making that direct link to the artist. That’s the world we are living in now, where people want to feel like you are a real person.”

You might expect that bringing a popular vote into the creative process would make Talibah’s second album even more eclectic than her first. In fact, this time around the music will actually be more focused.

In writing the music for her EPs, she says she is “rediscovering” the blues, a style her mother had much success with and which she sees as the foundation for a wide range of music. Although she has tapped into an edgier rock element, her fans can still expect a strong soul sound from her.

“There’s a real edge to it, but there’s still soul. I can’t get away from soul because that’s just who I am.”

Saidah Baba Talibah opens for TV On The Radio at the Luminato Festival Hub on June 13. Tickets $35.