The Interior Design File: A man cave that is welcoming to women - Streets Of Toronto
Skip to content 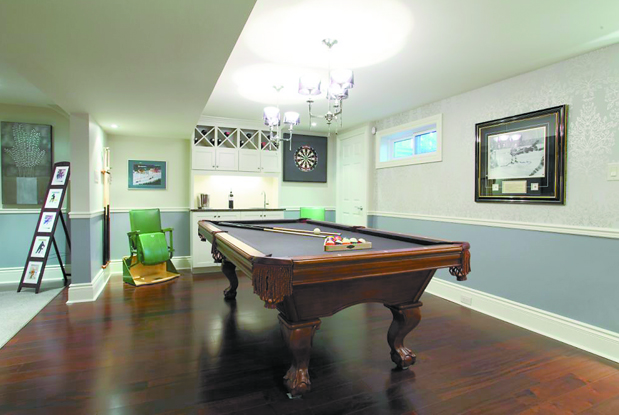 All guys seem to have some combination of a framed hockey jersey, soccer team photo, a couple trophies or an AC/DC guitar hanging around the house, a combination that spouses have a hard time dealing with.

“You can put that in your office or in the basement” is the common refrain as we work with couples designing a new space for the two of them.

Although the idea of the basement seems like “exile,” you can make that “lower level” a pretty great spot to hang out with friends, the kids and, if you do it well enough, with your significant other as well.

In one of my latest projects, we wanted to create a space for the family that would still work as a man cave when everyone went off to bed. He really wanted to have a bar, a pool table and to host poker games. She wanted a crafts area for the kids and a space that they could all watch television. His idea of television was Hockey Night in Canada and hers was a little more The Bridges of Madison County. That is where we came in.

It was completely possible to create a bar area that would keep them both happy by using a combination of glass shelves, stone countertops and a sink. The function was still the same, but we called it a wine bar. By using painted wood finished cabinets in the style of the wall panels and the storage cupboards, the entire bar has a classic look that appeals to both of them.

We managed to work in a bit of the hockey feeling by including the seats from Maple Leaf Gardens to flank either side of the bar, which offers a slightly retro, funky look and has a great story to it. The poker guys think it’s cool, but it is still acceptable to her. We agreed that the jerseys and trophies would come into this area, but by creating a specific space for them, they had some class and significance to the achievements.

In front of the bar, we placed a large pool table, which was significant on his list of “must-haves,” but instead of the traditional green felt, we selected a slate grey that updated the design with the traditional style of the carved legs and leather pockets. Using the wall space next to the bar, we installed a rack for the pool cues, which also holds the darts. The dart board is across from the pool table and completes the games area.

The combination craft table and poker table was a much easier fix.  She simply didn’t want to have a big poker table in the middle of the space, and although we were not able to provide a completely traditional poker table, the trays that hold the poker chips are stored in the cabinets behind the table.

The table simply becomes a table with a dual purpose. Remove the flowers in the vase, add a bowl of pretzels, and it’s a poker table.

The TV sits in the next room and is viewable from the bar or pool table for hockey nights, but it has a sectional sofa in front of it so they can curl up with a bowl of popcorn.

Usually the “media” area is a mess of speakers and cords, but by putting the AV tower in another area and using a loudspeaker technology by British-based Amina Technologies, we could give back the “real estate” of traditional box speakers. The colour is a simple grey-blue that is gender neutral enough that neither feels the pull of testosterone or estrogen.

What they finally ended up with was a space that is really a “man cave” where women are welcomed and happy to be there. The debate over “the game” vs. “the chic flick” is, however, beyond our expertise.

Glen Peloso is a design expert on The Marilyn Denis Show and Restaurant Makeover.