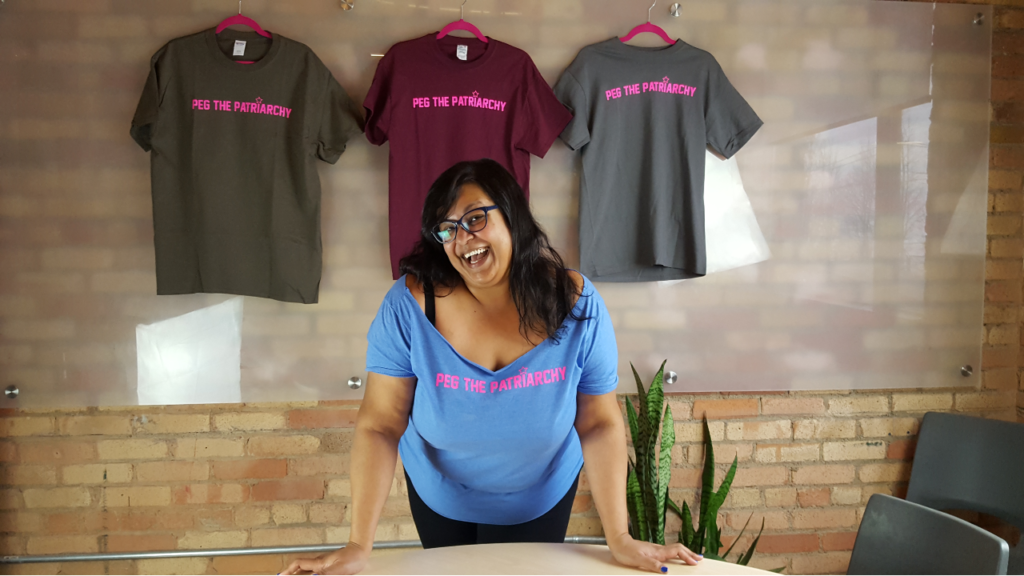 Model Cara Delevingne turned heads at last night’s annual Met Gala with her understated look that featured a bold slogan across the front of her vest – ‘Peg the Patriarchy.’ But soon after she arrived on the red carpet, Toronto community members pointed out that the slogan and font was taken from Luna Matatas, a Toronto-based sex educator who coined and trademarked the phrase back in 2015.

“It’s not the first time someone has stolen my art, which is why I trademarked it,” Matatas says. “But, you know, there’s that sinking feeling of, ‘Wow, this is such a misrepresentation of my brand.'”

She says the phrase took off, and she found that people loved it as both a sexual metaphor and a political message about the patriarchy. Matatas submitted a trademark application for it, and has since sold mugs, shirts and even masks emblazoned with the slogan.

Delevingne was obviously part of the group with whom the message resonated; Matatas points out that the model co-owns sex toy company Lora DiCarlo, and the company follows Matatas on Instagram and has reached out to work with her before.

But Matatas has received no credit from Delevingne or Dior, the designer behind the look. “It would have been such an easy thing to say, ‘Hey, Luna Matatas has created this phrase, I’m happy to be rocking it because I believe in it too,'” she says.

Matatas notes that it’s particularly upsetting because of how this reflects the actual message of her slogan. “This spirit of competition and erasure, especially of a queer woman of colour by a white, thin cis woman, this work is very patriarchal,” she explains. “It’s very much how patriarchy sets us up to think that we can’t win if we all thrive.”

TRNTO.com has reached out to Dior for comment, but they did not respond in time for publication.

Matatas says this experience has also shown her how supportive her community is. “I really feel like I belong in the communities I’ve been nurturing relationships with. Whether they’ve bought something or not, they just hate seeing works stolen and not credited,” she says.

For now, Matatas is worrying about reclaiming her Search Engine Optimization (SEO) and chasing down copycats, who have already started printing items with the stolen (and trademarked) phrase. “It’s not only a loss of income, but it’s this loss of space that’s so hard to occupy as a sex educator and as someone who doesn’t have access to power that Cara and her company has access to.”