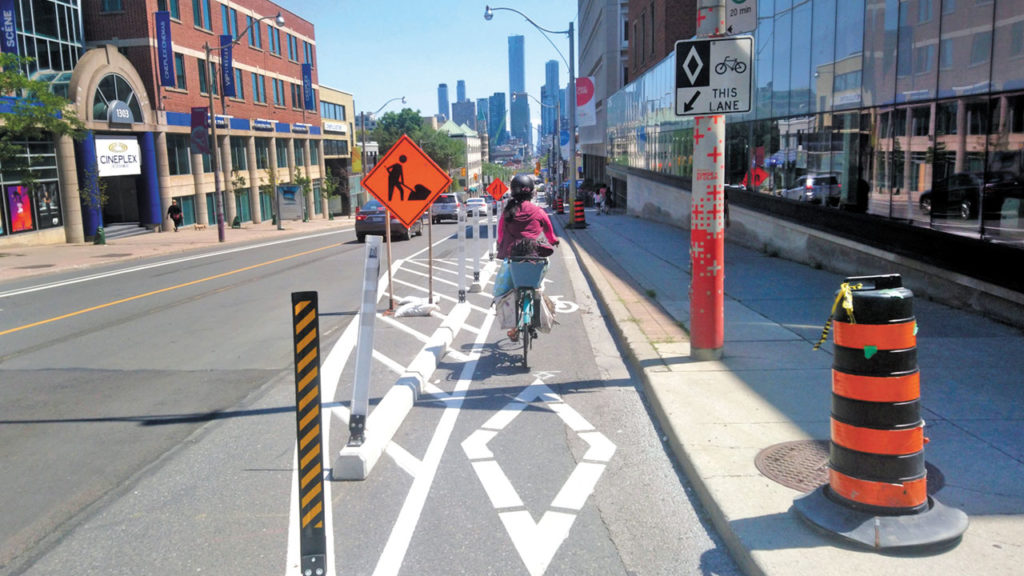 The Midtown Complete Street Pilot Project which includes separated bike lanes on both sides of Yonge Street between Bloor Street and Davisville Avenue could be made permanent this month as public support surges, thanks to a petition that has garnered thousands of signatures.

The project was approved as a pilot back in April 2021 as part of the City of Toronto’s Pandemic Mobility Recovery Strategy. Monitoring has proceeded apace since that time as well as minor improvements, including the addition of left-hand turn lanes.

New city councillor Diane Saxe said she is looking forward to receiving the staff report that will inform the discussion at council this month.

“I was one of the early signatories to the Yonge4All petition, which now has something like over 5,000 signatures,” she said.

Saxe added that there are a number of competing priorities on Yonge Street and a balance must be achieved.

“I do think that having protected bike lanes on Yonge Street is a very important part of the city’s transportation transformation. At the same time, there have obviously been some issues,” Saxe explained. “And one of them is the interaction between CaféTO and the bike lanes. And that, I understand, is going to be somewhat different next year, that we have a report coming to council proposing revisions to the CaféTO program.”

Although there are some residents that have expressed concern over increased traffic and its impact on residential streets and the movement of emergency vehicles, data released by the city in an interim report suggests that there has been little impact.

“Yonge4All is delighted to see that the city’s data support our own lived experiences since the pilot was introduced. Yonge Street is more welcoming, safer and better for businesses,” said Robin Richardson, spokesperson for Yonge4All.

And there is support for the quality of life offered with a complete street.

“The improvements to Yonge Street, including bike lanes, elevated bus platforms, shortened crossing distances and improved sightlines at intersections, have improved the quality of life for residents in the area and brought new vitality to our core neighbourhoods,” said Paul Buksner, executive director of Mooredale House (Rosedale-Moore Park Association).

City of Toronto’s Transportation Services is expected to report to the infrastructure and environment committee and Toronto City Council by January 2023.