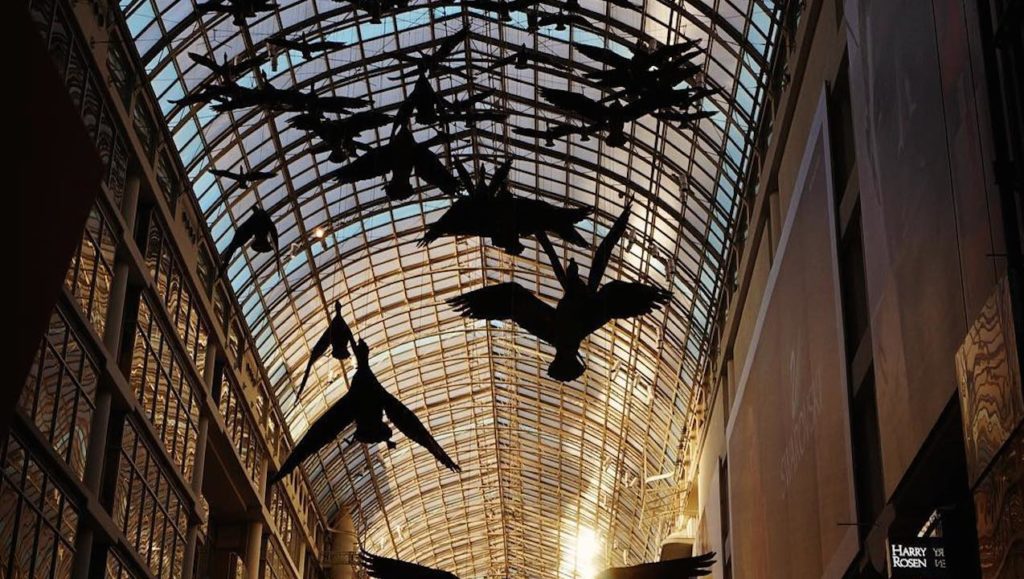 The Eaton Centre is getting quite the glow up to the tune of $77 million and it means Toronto will be losing one of its most iconic installations – temporarily.

The refurbishment project was announced on Tuesday with detailed plans to restore the mall’s central galleria skylight and improve pedestrian access. The plan is to maintain the skylight’s original 1970s look but with the “latest materials and technology to improve energy efficiency,” according to a press release. Cadillac Fairview has even tapped the original architects of the initial skylight project at Zeidler Architecture Inc. to get the $60 million job done.

For an additional $17 million, the mall will undergo renovations to helps ease the flow of traffic, including elevator upgrades and the addition of three new staircases in the Urban Eatery food court area and South Court, all with a focus on improved accessibility and crowd control.


This isn’t the first facelift the mall has had. Back in 1979, Canadian artist Michael Snow was commissioned to do a sculpture depicting 60 Canadian geese flying through the galleria. This installation caused a bit of controversy when, during the 1981 holiday season, a mall operator decorated the geese with red ribbons. Snow asserted that the ribbons offended the integrity of, and distorted, his work and the artist brought an action against the Centre to get an injunction to have the ribbons removed.

Remind anyone of The Canada Geese at the Eaton Centre? WHAT a fiasco THAT was!

Now, 41 years later, the sculpture will need to be carefully removed temporarily to complete the skylight refurbishment project. However contentious this move may be, mall representatives ensure it will be safely reinstalled once complete.

There will be minor disruptions over the course of the two-phased redevelopment project, with the first phase beginning in mid-January and covering the south end of the mall extending from Queen Street. The second phase involves the mall’s north end and is set to begin March 2023.

In the press release, Wayne Barwise, executive vice president of development at Cadillac Fairview said, “The galleria’s original design was inspired by the Galleria Vittorio Emanuele II in Italy and has served as a distinguishing feature of the mall since the centre’s opening in 1977. As custodians of this unique architectural element, our priority is to ensure the integrity of its design as we significantly enhance its functional performance.”

You might be able to squeeze in one last glimpse of those flying geese before the project begins if you hurry to the Eaton Centre this weekend.