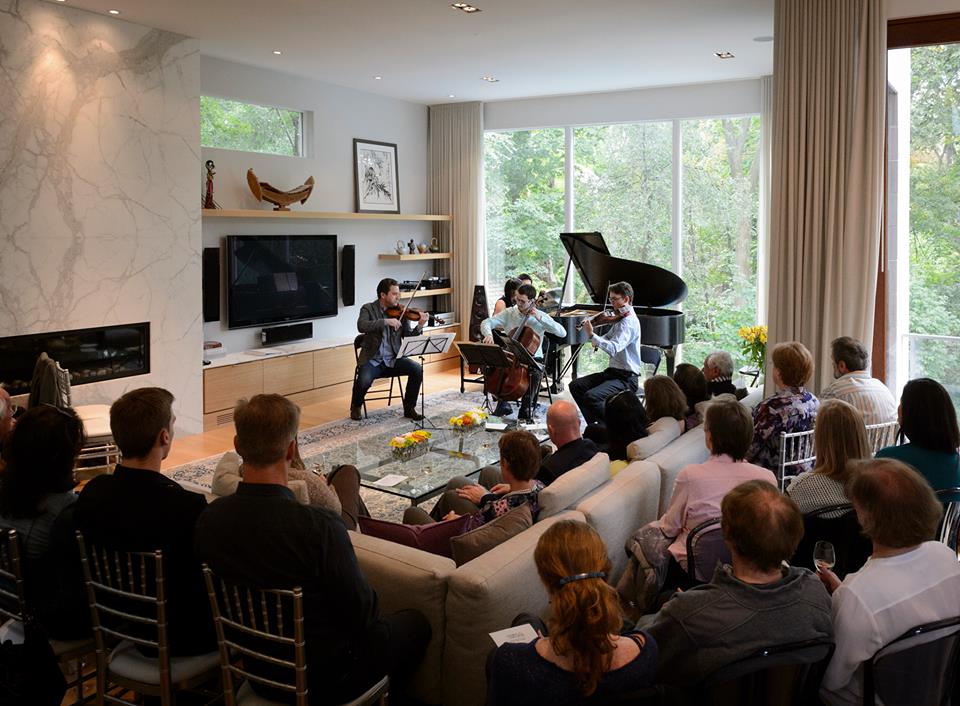 In a world where audiences have to be begged to turn their phones off in the theatre, some places still exist where a performance can get the attention it deserves and it’s all about the music.

They’re called house concerts, and although they may not have marquees, mosh pits or even a proper stage, most times anyone who has attended one will tell you that what they lack in glamour they make up for in heart.

The concept of house concerts is not new. Musicians have been singing for their supper in private homes long before the concert hall was conceived and more recently in the folk music scene. And although some believe playing in the limelight to hordes of screaming fans is the mark of a successful artist, others would argue the merits of a stripped-down show.

Juno Award–winning musician Dan Mangan runs Madic Records. He launched a house concerts tour this past fall featuring one of his label’s artists, Astral Swans. When promoting the event, Mangan talked to local media about his roots in house concerts and the special community that is created.

“Many people are seeking out more intimate, personal ways to enjoy art and interact with each other,” says Emily Rho, co-director for Pocket Concerts, one of several Ontario-based organizations that acts as a liaison between home and headliner.

“House concerts offer both of those things, along with the intense emotional experience of listening to high-quality live music up close.”

The Victorian-style O’Hara House has seen the likes of American singer-songwriter Jonathan Byrd and Canadian folkd music group the Slocan Ramblers pass through its parlour. As an added bonus to attending private concerts, guests are given the chance to rub elbows with the performers during the “meet and mingle” portion of the evening.

O’Hara House Concerts, which most recently included Winnipeg-born troubadour Corin Raymond, are held as musicians’ and hosts’ schedules allow and come with the warning that, if tickets are not booked in advance, there may be standing-room only.

Comprised of a collection of classically trained musicians, the Living Room Project strives to bring young, professional performers and chamber music enthusiasts together as part of a mutually supportive culture.

“The communal experience of music in a private home almost becomes a living thing,” Barabash, a pianist, adds. “You just can’t replicate that experience in the company of hundreds of other concert-goers.”

According to Barabash, the idea has more than caught on. The organization has enjoyed packed houses ever since its premiere concert. A recent performance featuring cellist Andrés Tucci Clarke sold out quickly, prompting a second — also sold-out — show.

Sofar Sounds
According to Jonathan Campbell, a producer for Sofar Sounds Toronto, the personal connection found in a house concert goes a long way toward winning over lifelong fans.

“What I love is that the artists are up for it,” he says. “[They know] that resources are tight in our case, but the idea is so attractive that they do it,” he says.

With branches in 205 cities worldwide, Sofar Sounds aims to provide an intimate live experience for its growing list of subscribers, with a twist: the featured musicians are not revealed until the proverbial curtain rises.

The element of surprise adds another dimension to the performance, santur player Sina Bathaie says of his first-ever Sofar show.

“It’s risky, and you don’t know how the audience will react to your music, so the energy is different — exciting” he explains.

Campbell agrees, adding that dedicating a space specifically to hearing music has profound effects on everyone involved.

“There is a tangible effect on both audiences and artists,” he says, “because it’s so rare to experience music in absolute silence. So when people have that opportunity, it’s really and truly magical.”

Pocket Concerts
“The demand for the house concert experience is very strong right now,” Rory McLeod, co-director of Pocket Concerts in Toronto says. “Most of our public concerts have been sold out since we started in 2013.”

Whereas some private concerts take the form of an in-home hobby, Pocket Concerts has found a professional niche, offering its musical hosting services for private parties in addition to putting on public shows with the help of homeowners throughout the city.

McLeod believes the professional repertoire of top classical musicians — many of who perform for Toronto’s symphonies and orchestras,  such as recent guest and TSO violist Theresa Rudolph — is what makes Pocket Concerts popular.

“When you pluck people from the stage of Roy Thompson Hall and have them perform a professional concert under people’s noses,” he says, “the audience gets more than they bargained for.”

According to Rho, the success seen by the company over the past few years is unsurprising, given the growing demand for in-depth musical experiences from devoted audiences.

“House concerts are like going to a farmers’ market and connecting directly with the farmer rather than going to a grocery store,” she says.
“The emotional impact you get as an audience member is far greater in a setting where you can watch and listen up close.”

Music on Mclean House Concerts
After 10 years of running live performances out of their home on McLean Boulevard in Perth, Ont., Sue Tennant was supporting the musical arts in her living room way before it was cool.

“House concerts fill a much-needed void by providing good-quality music to a small, appreciative audience,” she says of her operation, Music on McLean House. Tennant’s folk-focused concerts are unofficially free, with suggested donations accepted on behalf of the musicians, which have included violinist Jaron Freeman-Fox and Canadian alternative band New Country Rehab.