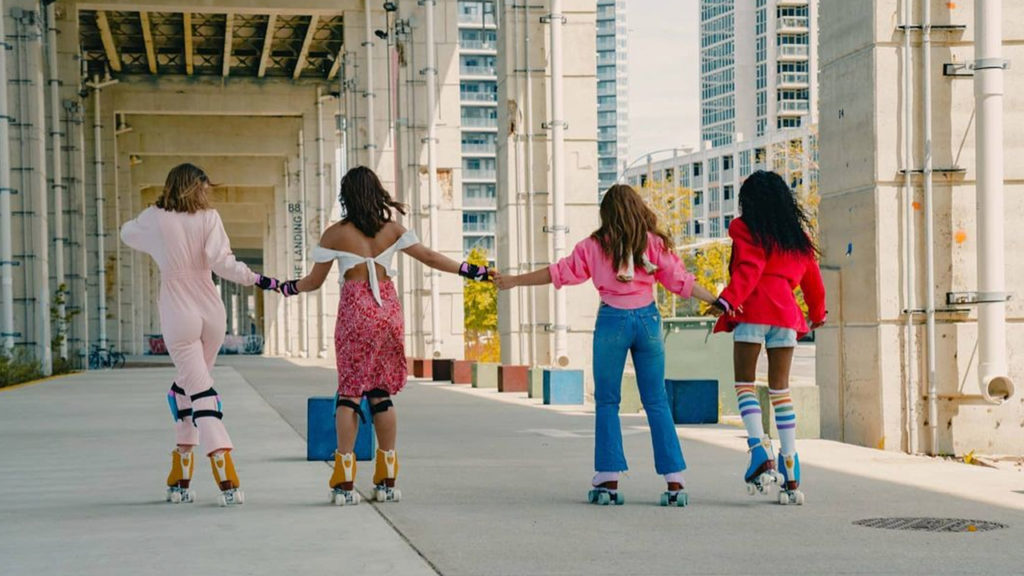 It’s been quite the year in the city of Toronto. With the pandemic continued to keep a lid on a return to normal life, we thought we’d take a look at a few of the fun and progressive things to happen in the city over the past year. What was your favourite? Send us a note or comment.

Old school roller skating is the hottest summer trend in Toronto, and it started at the Bentway’s Retro Rolla pop-up. From Thursday to Sunday, the quirky strip of parkland under the Gardiner Expressway transforms into a groovy roller palace with rental skates and lessons available for those ready to give it a try.
Retrorolla.com.

If someone had mentioned 10 years ago that one day there would be separate and safe cycling lanes along Yonge Street in the city, the eye rolls and snickers would have been merciless. Now it’s a reality. Public space and active transportation are valued for climate crisis–fighting benefits, their economic benefits and so much more. Long may we pedal the Yonge Street bike lanes.

Although the city of Toronto doesn’t make a habit of preserving and celebrating built heritage, there are times when we prioritize. First, Massey Hall. This is one of the prized buildings in the city, and it is set for the grand reveal this fall of an exhaustive two-year project to preserve and revitalize this gem. In midtown, the Capitol Theatre condo project shows that it’s possible to retain key heritage attributes while providing new housing.

Toronto is doing a lot of things to help with our environment, from green development standards to smaller projects along the waterfront, such as the Seabins on Harbourfront, which suck in and collect all kinds of waste on the shores of Lake Ontario at the harbourfront, which makes it that much easier to enjoy our watery playground.

In the middle of the pandemic’s icy grip, Charles Khabouth and Ink Entertainment converted an unused parking lot into a new drive-in venue complete with a top-quality stage and sound system where the CityView Drive-in hosted top musical acts and screened movies for TIFF and the general public when we needed it most. Thank you, Charles.
20 Polson St.

Trying to do right for those experiencing homelessness in our city is challenging. Although the city did poorly in clearing out homeless encampments with legions of riot police, earlier in the pandemic things were trending in the right direction when the administration aggressively pursued long-term housing by purchasing or leasing space in many hotels including the Roehampton Hotel in midtown. Is it perfect? No. But it shows the city is willing to make bold moves. Now we just need more of them.

Although the Beach Rock Snake started as an innocent bit of fun for a local seven-year-old kid, it has turned into a massive show of community solidarity. Earlier this year, a painted rock was placed on the sand beside the boardwalk of Kew Beach along with a sign asking for others to do the same. The rocks now number in the hundreds or perhaps thousands and the snake stretches as far as the eye can see. Epic.

We love our animal sightings in the city, and no little critters are more beloved than foxes. But the prize of the year has to be the video showing a rare silver fox prancing through the University of Toronto campus earlier this year. Peak cute.

Honouring those who preserve local character, help residents and do what’s right.

Little Jamaica is a special neighbourhood, and the community are doing their best to keep it that way. One new initiative is the Afro Caribbean Farmers Market, Tuesdays, focusing on culturally appropriate fruits and vegetables from the Caribbean.
1531 Eglinton Ave. W.

Affordable housing is the bane of Toronto’s urban existence, and it seems like nothing ever happens. And that’s why when the Kensington Lane Trust decided to do something on their own and buy a building for its residents, it was so impressive. Hopefully the move will inspire others. It is one thing to make overtones and say the right things in the fight to end anti-Black racism and right historical wrongs. It is entirely another to act. That is exactly what the city of Toronto did voting to change the name of Dundas Street, one of its busiest, and best-known thoroughfares.