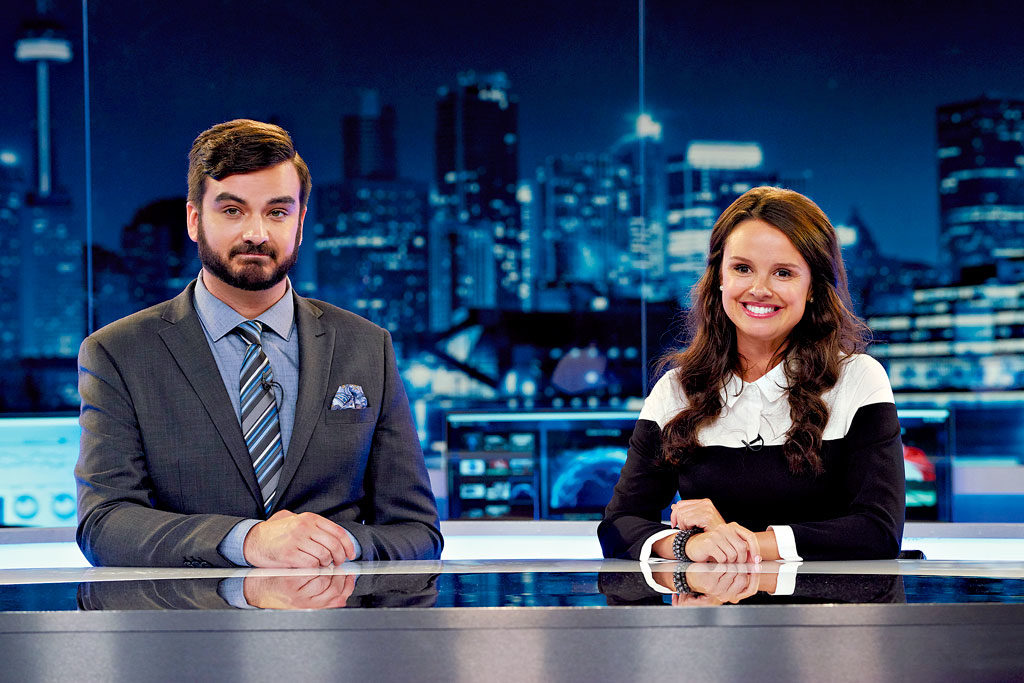 There was a poll taken a while back of Saturday Night Live fans, asking them their favourite part of the program. The winner, by far, was Weekend Update, the fake news desk segment in the middle of the show.

Many viewers thought it could be lengthened and made into its own show. Now it has been, only it’s produced here in Canada, and it’s called The Beaverton.

The show is a perfect example of the new media model: get some webisodes on the net, garner a following and wait for a network to pony up a real budget, which the Comedy Network did.

It’s a very handsome and luxe treatment, complete with crane shots and sophisto lighting. If you watched it with the sound off, you’d swear you were watching a real news show on CNN.

The hosts, Emma Hunter and Miguel Rivas, are perfectly cast, delivering their lines with just the right amount of self-satisfaction that mimics the puffery that threatens to drown news anchors. The show moves fast. If you don’t like one piece, there’s another one a few moments away.

The show uses a series of regular correspondents to do field pieces and interviews. I like Marilla Wex’s starchy, Euro-investigator, and Laura Cilevitz brings a note of glamour and stardom to her clever bits.

There’s Canadian content, but it’s balanced by a lot of satire about international news events. I tried to discern if the show had an ideological stance like The Daily Show, but it seems happy to just go for the laughs. The Beaverton is more about absurdity but does traffic in barbed satire.

As Emma Hunter says on the show, “Legalizing marijuana is this country’s version of the civil rights movement.”

The format isn’t completely original. The Beaverton is Canada’s answer to the Onion, which began publishing in Wisconsin in 1988 and went online in the ’90s.

Although the Onion had a radio series, a film and a massive YouTube presence, it never had a regularly scheduled TV series. The sensibility, though, is identical to The Beaverton.

But long before either the Onion or The Beaverton or even Weekend Update existed, a little-known Canadian TV series was doing its version of the show, way back in 1973.

Shhh! It’s the News was one of the initial offerings of fledgling Global TV, created by the late great Don Harron.

News parody shows are something this country has done exceptionally well, as evidenced by Royal Canadian Air Farce and This Hour Has 22 Minutes.

What makes The Beaverton so timely is the stew of confusion generated by serious fake news and “alternative facts” that have become part of the Trump era.

A show such as The Beaverton is now in the surreal position of being a “fake” fake news show.

For example, there was a Beaverton story that when astronaut Chris Hadfield returned to Earth he had to pay a roaming cellphone bill of $1.3 million. It was reported as truth as far away as Hong Kong.

As The Beaverton becomes more successful, it would be nice to see some guest star cameos, and maybe some “in-depth” pieces that run longer. But let’s not quibble. It’s good to have The Beaverton with us.