The beauty and the beheading: Toronto star returns in new season of Vikings - Streets Of Toronto
Skip to content 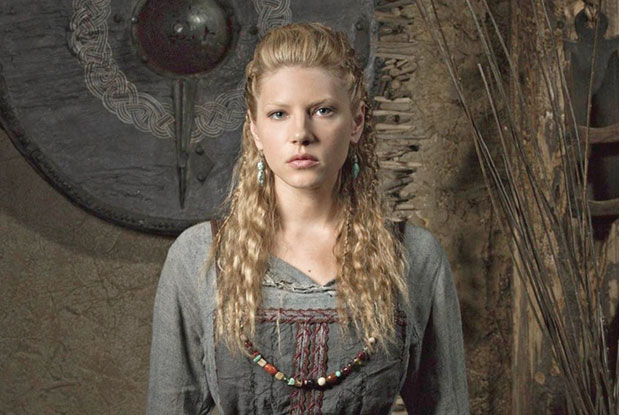 Katheryn Winnick is a little smaller than one might expect as one who portrays legendary shieldmaiden Lagertha on the hit series Vikings. But she’s nicely turned out by comparison, ready for the onslaught of attention she is receiving at the announcement of the nominations for the Canadian Screen Awards.

She could be slapping aside reporters with her shield and maybe beheading a gossip journalist or two, but she is on her best behaviour.

Winnick was nominated for best actress in a dramatic series, and the runaway hit series Vikings — one of the most popular shows in the country — was nominated for a slew of awards. But we’re here to find out what happens next. Season two of the series premieres Feb. 27 on the History Channel. And, more importantly, why oh why must everyone lick the seer’s hand as payment for a prognostication?

“Ahaha, that is hilarious. I wish all my interviews started like that instead of ‘describe your character,’” says Winnick, squirreled away in a quiet corner of the Ritz-Carlton following the big announcement.

“It wasn’t originally in the script and we just wanted to come up with something unique and different. Travis [Vikings star Travis Fimmel] did it first. My new pages were revised that morning, and all of a sudden they added, ‘Lagertha licks his hand.’ When, covered with all these prosthetics, and all this alcohol and makeup on his hand, I had to lick it, I’m not kidding, 14 times.”

Vikings is set in the Dark Ages and is based on actual Norse mythology. The story revolves around the life of legendary Viking Ragnar Lodbrok. Winnick’s character, Lagertha, is Ragnar’s wife. Or, at least she was in the first season. Now, all bets are off.

Season two begins where the last season left off, then the story zooms ahead a number of years. Ragnar is off pillaging and plundering, and Lagertha finds herself married to a rich earl. “You can fill in the holes, yourself, what is happening,” says Winnick. “It’s not so big a jump that I felt we aged so much. But it was interesting and difficult to accept that my son is now grown up. He was 14 in the first season, and they recast him and now the person that plays him is 20 years old and six foot four.”

We wouldn’t want to reveal too much of the upcoming season, but for Lagertha apparently a tattoo is involved, and a quick read of the actual mythology surrounding the character will reveal what happens to husband number two. Spoiler alert: Lagertha may happen to murder him.

“Yes! How did you know that?” says Winnick, surprised by the rare display of investigative journalism courtesy of a little-known website dubbed Wikipedia. But, we’ve said too much already.

Winnick, of Ukrainian decent, was born and raised in Etobicoke, although she doesn’t count herself a member of the Ford Nation. Although she is currently living in Los Angeles, Toronto is still home and her family still resides here. When back in town, top of her list is a stop at the venerable Rodney’s Oyster House. “I actually have a shell up there [on the wall] that I wrote on,” she says. “It is a staple; I must do that when I’m here,” also adding that the festivities surrounding Ukrainian Christmas are high on her list.

Winnick started practising martial arts when she was just seven years old, got her first black belt at 13 and opened her first school at 16. Seriously. She continues to operate a self-defence consultancy with her brother Adam, a member of the Canadian Forces, to teach women how to “carry and conduct themselves in certain situations.”

“My first love was martial arts,” says Winnick, who went on to become a professional bodyguard and started working with actors and actresses, coaching them on martial arts. And that landed her on the set of eXistenZ, a David Cronenberg film shot in Toronto.

“His was the very first set that I went on,” she says. “I was just in awe of the production, and I realized I would like to try to be in front of the camera. So I owe him a great deal of credit.”

Since then, she has appeared in numerous films and TV shows. Last year, she portrayed Charlie Sheen’s girlfriend in A Glimpse Inside the Mind of Charles Swan III. And, most recently, as Kurt Russell’s girlfriend, Lola, in the feature film The Art of the Steal, also starring Canadian Jay Baruchel.

But Vikings is something else entirely. It is in a similar vein to something such as Game of Thrones, which started out as a niche product but has exploded in popularity. The Vikings series premiere drew more than six million viewers in the United States.

Winnick gives the producers of the series a lot of credit for concentrating on talent. “They spent a lot of time on casting,” she explains. “There are no divas on set; everyone is just there wanting to do good work. Me, I’m still pinching myself that I have this job. I feel very grateful just to be a part of something like this.”

In season one, Ragnar rebels against the village godfather and sails west to England to great success. He is in serious plunder mode most of the season, while Lagertha spends much of the time back at home child-rearing and helping the local villages through a bout of the plague. She still manages to flex her rather sizable Viking muscles on occasion, beating up on a couple of travellers looking to take advantage of the poor, defenceless maiden at home alone while her man is away. Big mistake.

It is this combination of nurturing and knuckles that has made Lagertha so popular with young female viewers and more than a few males as well. When Winnick and company hit Comic Cons, the Vikings are overrun. This gives the actress an opportunity to influence young girls, something she takes very seriously.

“I realize how unique her character is and how strong a woman she is,” she says. “It is so overwhelming and amazing to see how all the girls look up to her. Especially at Comic Con, where I see them dress like her. I feel like it is such an incredible opportunity for women to be able to celebrate their strength as well as their femininity.”

The season premiere of Vikings is slated for Feb. 27.