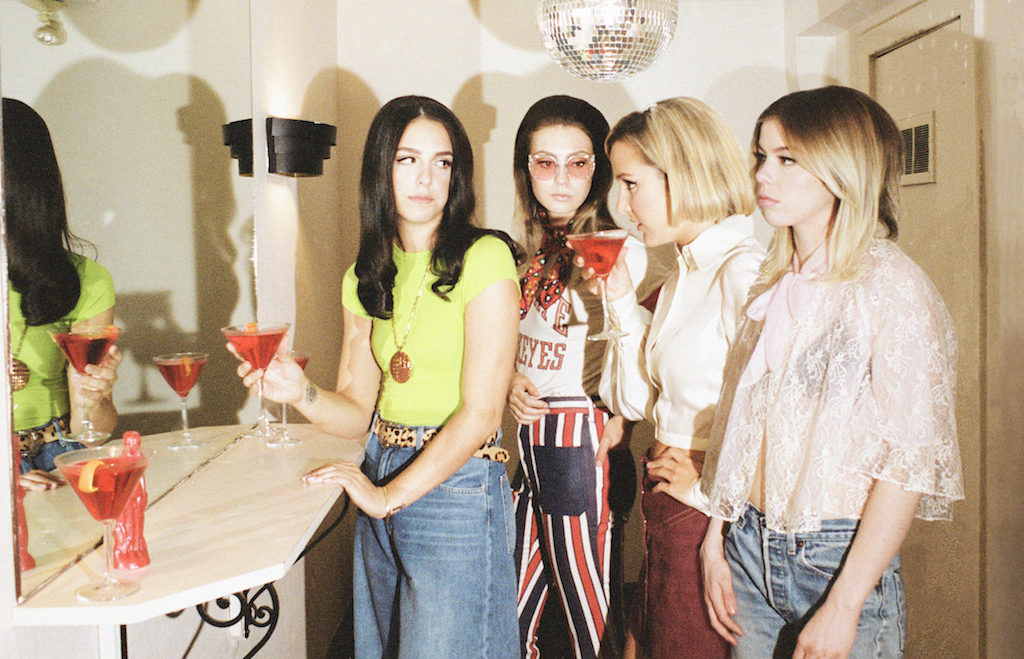 The Beaches are a band from, you guessed it, the sleepy lakeside neighbourhood of the same name in the city’s east end. And after a slow burn the last couple years releasing an EP here and a single there, the hard rockin' quartet are about to take the next sizable step with their big label debut album out this fall, opening up for Death From Above later this year, and a coveted slot at this weekend’s Big Feastival in Oro Medonte north of Toronto.

The Beaches, sisters Jordan and Kylie Miller (on lead vocals/bass and guitar, respectively), Eliza Enman-McDaniel on drums, and Leandra Earl on keys and guitar, have been busy working in the studio alongside producers Emily Haines and Jimmy Shaw of Metric fame to put the finishing touches on what is sure to be a big, brassy rock record. This week, the band released “Money,” a new single off the album.

“It’s s a lot about that personal experience of the last few years and a lot about rock n roll, hanging out with friends, having a good time, being young and making some mistakes but learning to live with those decisions,” says Kylie Miller.

The sisters first dreamed of rocking out on stages when they were both single digits and signed up for music class in said Beaches. They put together their first band, the very Disney Done with Dolls, with their high school friends while attending the Rosedale Heights School of the Arts. In 2013, the band became The Beaches, and adopted a much heavier classic rock sound.

Apparently, it was the right move. Gone were the appearances alongside a talking vegetables on CBC Kids, in its fibrous place an opening slot for Eagles of Death Metal, gigs at Osheaga and T in the Park music festivals and much more. With equal amounts of  swagger and sass, The Beaches seem to have hit a chord with fans who seem to appreciate the new authentic rock vibe happening.

“We are so happy that they are enjoying it,” says Miller. “We are really just doing it for fun because we love music and we love rock, and we didn’t really see a lot of people doing what we wanted to hear. We want to bring people back to the ’70s so that’s kind of what our mission for the record and we are just glad people are appreciating it.”

This weekend’s Big Feastival will see the band playing on Saturday alongside other bands such as including Wintersleep, The Elwins, Magic!, Strumbellas, and headliners Ben Harper and the Innocent Criminals. Sunday’s lineup includes acts such as Basia Bulat, De La Soul, Ok Go and headliners Weezer.

But this festival is not just about sweet tunes, although there is plenty of that to go around. The festival is equal parts amps and eating with a side of family friendly.

Toronto and environs hasn’t had a hot summer for festivals in 2017, what with the cancellation of Bestival and (it seems) the Toronto Urban Roots Festival. Along comes something called the Big Feastival up in sunny Oro Medonte that combines a chill, good time music festival with a whizbang gourmet food celebration. What a breakthrough!

So while some might head north for the cool tunes, others might be interested in catching an appearance by one of a slew of notable chefs including Chuck Hughes (pictured below), Vikram Vij and Devin Connell. There are cooking demonstrations, as well as a cooking school and table sessions that invite participants to belly up to a harvest table for intimate culinary chats. There’s even a cheese cave and a slew of street food.

If the kids are along for the ride, there is plenty of music, games and foodie fun for them as well including an appearance by the legendary Fred Penner, a late night silent disco, a hoop jam, a big top, lawn games and the little kitchen for pint-sized chefs.

There is camping for those so inclined, and if that is your bag, the festival is open as of 3 p.m. on Aug. 18 to pitch your tent and get the lay of the land. There are also single day and weekend passes available for those who want to fill their faces, rock out and head home. It's shaping up to be one sweet festival in a summer rather lacking in that department. Go here for all the information and more.

Go, have your fun.