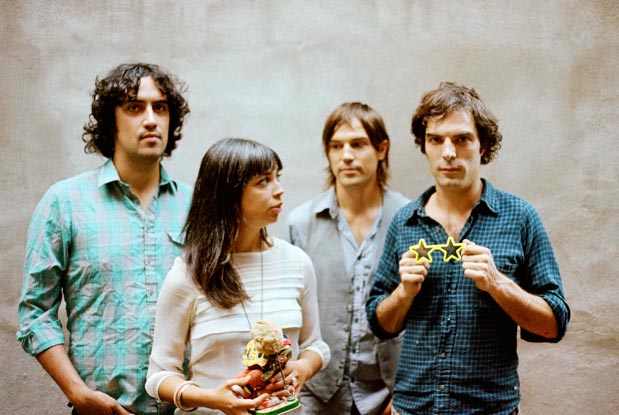 Hailing from Montrea (via the U.S.), The Barr Brothers released their long-awaited debut album late last year and have been touring and gaining notoriety as of late, including an appearance on Late Show With David Letterman in January. Best known for their energetic and improvisational live shows, the band — Brad and Andrew Barr along with Sarah Page and Andres Vial — checks into Queen West's The Great Hall tonight in support of their self-titled debut album out now on Secret City Records.

It'll be good, and you should go. We caught up with Brad Barr while he was checking out the Motown Museum in Detroit in between shows. Here are the highlights of the interview:

• “Andrew and I started playing together when we were kids, playing instruments and rock 'n' roll tunes in high school. Right after that, we moved to Boston for music school at Berklee and started a trio called The Slip.”

• “I had a big appetite for learning, you know, and we tried to play everything — Indian music, jazz, funk, it was a real kind of freedom to experiment.”

• “The Slip were playing in Montreal in 2003 at Le Swimming, and the club caught on fire during the last song, and the whole place emptied out onto the street. And my brother started talking to a waitress, and had a good conversation with her. A year later in 2004 he got in touch with her before coming to town and had a cup of coffee or something. They ended up having a long distance relationship until 2005, when he informed me he was moving to Montreal. I was happy to get on board, and needed a change myself and I loved the feeling of Montreal.”

• “It has been pretty fantastic over the last five months or so since the album came out. We've been really fortunate to have some good folks helping the music get out into the right hands. That's a pretty great feeling that I'm psyched about.”

• “We're all kind of naturally eclectic, listening to a lot of different stuff. As a student and lover of music, you start to gain an appreciation for things, whether it is Alan Lomax's field recordings of Delta blues music or West African, we just gravitated to all kinds of music.”

• “A live show has to have a degree of risk for me to stay intrigued and on my toes.”

• “My first album was a cassette of Who Made Who by AC/DC. I heard "Ride On" in the Stephen King movie Maximum Overdrive, and thought, what the hell is that song? It was the blues, but it was amped up, something that really spoke to a 10-year-old kid. It is still my favourite guitar solo of all time.”

• “In the high school years, stuff like The Allman Brothers — just a bunch of guys playing cool southern rock, but stretched out and psychedelic — really got me thinking seriously about music, thinking about my own psychedelic experiments if you will. So The Allman Brothers, Led Zeppelin, The Rolling Stones. That was the first music I really tried to imitate, I guess, besides learning "Wipeout" or something.

• “Beggar in the Morning” was one of first songs I wrote when I got to Montreal. I think, you know, it was hard to say at the time what it was about. But when I listen to it and sing it now, it kind of evokes a certain feeling of alienation and voyeurism, of being a stranger somewhere having to find your footing and make sense of people — being well aware of certain paradoxes at play in the world and within yourself.

• “Since we put out our record, we're touring with five or six new songs not on the album.”