The amount of volatile oil shipped through Toronto by rail is soaring. Should we be worried? - Streets Of Toronto
Skip to content 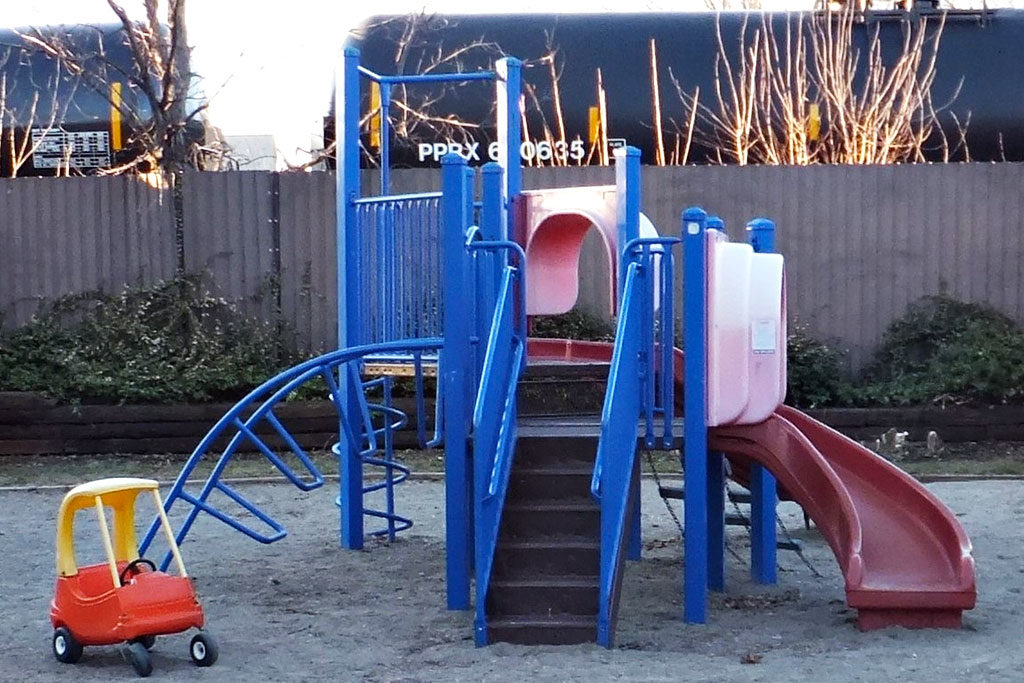 “Residents … of communities across Toronto are being unfairly put at risk by crude oil shipments through the city,” said councillor Kristyn Wong-Tam.

“While these lines have been used to move goods across the country in the past, the argument from precedent completely ignores the reality — this volume of explosive goods has never been seen in Toronto before and was never planned for,” she added.

Many Torontonians may be unaware that highly volatile oil is shipped by rail across Canada and through Toronto every single day.

The rate at which these oils is shipped by rail (oil-by-rail) has soared in recent years as rising quantities from the Alberta tar sands and North Dakota’s Bakken Formation outpace the capacity of current pipelines. Between 2009 and 2013 there was a 320-fold increase in oil-by-rail shipments across Canada.

Much of the area near the rail line was not residential until recently. Now, Toronto developers have sought out the last bits of empty land, such as the area between Dupont Street and Davenport Road west of Avenue Road, and as a result those areas are undergoing a significant residential build out.

Signs have begun to appear on streets, such as Macpherson Avenue, calling attention to the potential for disaster.

Helen Vassilakos is a resident of the Junction neighbourhood. Like many people in the GTA, Vassilakos’ home is within metres of the Canadian Pacific Railway (CP) line that cuts right through the heart of our city. In 2013, news of the Lac-Mégantic rail disaster sent shockwaves through the country. Vassilakos and her neighbour Patricia Lai were horrified by the disaster in which fireballs destroyed the Quebec town’s centre and 47 people perished.

“Lac-Mégantic was really a wake-up call for us,” said Vassilakos. “We started to do some research and were shocked with what we discovered.”

According to the Railway Association of Canada, oil-by-rail shipments grew from 500 carloads in 2009 to 160,000 carloads in 2013, with continued growth in the shipment of crude oil expected. The Transportation Safety Board of Canada has been voicing concerns about the safety of this practice for many years, arguing that current railway operating practices combined with the aging tank cars used are not adequate to effectively mitigate the risks posed by the transportation of large quantities of the volatile crude oil.

While Lac-Mégantic was the most deadly derailment in recent years, it was not the only one. In 2015, a Reuters analysis found that accidents in Canada due to poor track conditions hit their highest level in more than five years.

Trains operated by Canadian National (CN) in Canada derailed along main lines 57 times in 2014, up from 33 derailments the year before. Much of the oil trundling through the city — metres from Torontonians’ homes, schools and playgrounds — is highly flammable, corrosive and toxic.

In July 2016 Transport Canada released its biannual newsletter on the transportation of dangerous goods. Although the safe level of hydrogen sulfide is 100 parts per million (ppm), Transport Canada measured concentrations as high as 65,000 ppm in some of the oil being shipped across the country.

The majority of crude oil being shipped through Toronto, taken out of the ground in the Bakken shale region in North Dakota, makes its way to the Irving Oil Refinery in Saint John, N.B., where it is processed and exported.

“It’s all risk and no reward,” said Vassilakos. “The public is being asked to take on all the risk to both our safety and to the public purse.”

Vassilakos and Lai were moved to act and founded Safe Rail Communities (SRC), which advocates for safe, transparent and regulated rail transportation. The group has been garnering support across the city in neighbourhoods such as the Junction, Forest Hill and Rosedale, through which rail cars carrying volatile oil run on a daily basis.

Forest Hill councillor Joe Mihevc said he recognizes the rail companies were there first but sees the need for some middle ground.

“We recognize that [the rail companies] have a right to do this, but we are asking for this: to slow the trains down when they’re passing through and limit the hazardous goods that pass through,” he said.

SRC reports a more open dialogue since Minister of Transport Marc Garneau has taken office, but they are disappointed by ongoing inaction.

“The really substantive changes that are needed to actually make some sort of meaningful change that would make a difference in terms of public safety aren’t being done quickly enough,” said Vassilakos.

2002
The year the wind turbine at Exhibition Place was erected at a cost of $1.8 million.

$100
The amount, in millions, Ontario plans to spend on energy from renewable natural gas.

500
The number of electric vehicle charging stations in more than 250 locations across the province.

1
The percentage of energy that comes from solar in Ontario’s electricity supply mix.

3,346
The number of signers to a petition to close the Pickering Nuclear Plant, the fourth oldest in North America, in 2018.