Terrible twos? Try terrible teens. How to tame the angst - Streets Of Toronto
Skip to content 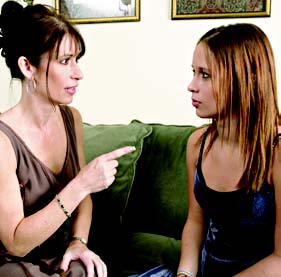 “I HATE YOU and I’m leaving home.” Is there a parent of teenagers who hasn’t heard those words? We only have two choices when we get that message (or one like it) from our teens. The easy choice is to make it about me. But it isn’t about you. It is as impersonal as when your newborn cried for food. We make those events personal because we’re so invested in our parenting — but take a step back, here’s some perspective:

Teens are hard-wired to oscillate wildly between two selves, the adult self (who they are becoming) and the baby self (who they have been). This oscillation is as inevitable a part of their development as puberty; it isn’t pretty.

The adult self is the one they trot out away from home. The adult self goes to a friend’s house for dinner, says please and thank you and offers to wash the dishes. When you hear about that you wonder: Is that my kid?

The baby self is the one you know better, the self more likely to appear when your teen is with you. In fact there’s an inevitable bounce back: After working hard at being the adult self away from home, when a teen comes home, the baby self often reappears with a vengeance. Where the adult self is calm, co-operative, helpful, thoughtful and rational, the baby self is selfish, lazy and cannot be reasoned with.

The toughest aspect of this violent shifting between baby and adult self is predictable: Set a limit or say no to a teen, and the baby self is in the driver’s seat. It doesn’t matter what the limit is (curfews, computers or chores) or what you say no to (parties, cars or money), the baby self has the same reaction: The teen version of a two-year-old having a tantrum. Say no to a teen and they sulk, they yell, they whine. They repeat, ad nauseam, all the irrational reasons why you’re wrong.

This was a 100 per cent preventable fight. Here’s how:

Every time you set a limit for a teen or say no, the baby self will rear its ugly head, will fight you on it ad nauseam, and can’t let go. After the second time of explaining yourself and defending your decision, if you stay in that conversation, you will get mad, which will not do your relationship any good.

Instead: After you’ve been around the block twice on the subject, leave the room. It sounds awful, but is about 10 times better than yelling at your beloved child, which is the only place it’s going if you stay in the room. On the way out the door, you might say: “We’re done here.” You then need to ignore the teen’s anguished wailing and keep walking. Remind yourself that you have just committed a great act of parental love, that this isn’t about you, and without you there to fight with, the baby self will run out of gas. And likely comply.

The hardest thing here is to accept that, when you try to convince your child why you’re laying down the law, no matter how many times or how logically you say it, your teen still won’t get it. The baby self can’t get it because the baby self isn’t listening. They can’t. Not until they’re about 21.

The nugget of gold here is your relationship with your teen — which you want to preserve and nurture. Yelling at your teen isn’t going to get you there. Where screaming erodes love, laying down the law has no deleterious effects on your relationship. It takes a grown-up to stay calm under these circumstances.

Parenting teens is not for the faint of heart.

Get an iron will and some self control.

Parenting columnist Joanne Kates is the director of Camp Arowhon in Algonquin Park where she teaches 150 staff to parent effectively and acts as “Mom” to 300 kids at a time, every summer.