Teetotallers in training - Streets Of Toronto
Skip to content 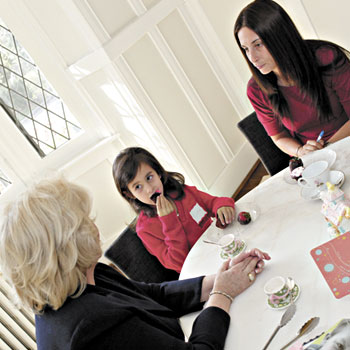 Rowan, my six-year-old daughter, likes to drink soup out of a straw.

I still get a chuckle from blowing milk bubbles. So, depending on your sensibilities, we are either the best, or worst, candidates for an etiquette class.

But that’s exactly what we’re doing today after school.

Thanks to Louise Fox, an extremely affable woman who owns the Etiquette Ladies, a company that specializes in etiquette for all ages and occasions, my daughter and I are learning what you could describe as basic manners during an afternoon tea party.

Some of Fox’s classes include Mad about Manners (for four- to five-year-olds), Courtesy for Kids (five- to 10-year-olds), Proud to Be Polite (eight- to 12-year-olds) and even a course called Backpacks to Briefcases, for young adults transitioning from school to the workplace.

Fox sets up settings for tea on my dining room table, which has never been used. Rowan and I — no judgment — usually eat, at different times, in front of the television.

Which is perhaps why both my daughter and I, along with countless others, are signing up for Fox’s courses.

“Who is eating around their dining tables any more?” Fox says. “In my generation, we learned table manners at home, around the table. These days, mothers are driving around taking their kids to hockey practice or dance lessons, and the kids are eating in the back of the car or eating while rushed around the kitchen island or the television. Parents are too tired, so unaware that their children may be eating with their mouths open for example.”

When my daughter arrives home, I introduce her. Rowan takes to Fox immediately. Fox is clearly comfortable with children, with a persona that demands respect. (Perhaps it’s her string of pearls?)

“A lot of the time, children will listen to me more than their parents.”

We sit down and Fox begins by asking my daughter what some of the magic words are. Proudly, my daughter answers correctly: “please”; “thank you”; and “you’re welcome.”

I like Fox because another one of her “magic” words is “I’m sorry.”

“Parents know these basic things, but they send their children because they realize how important it is to reinforce it.”

And, as children get older, parents are realizing that having good marks, while still important, will not necessarily advance them in the workplace.

“People don’t even know how to introduce any more.” She sighs. “If you meet someone and just say, ‘Hi, I’m Bob and I want to be a lawyer,’ the person is not going to remember that. In this day and age, it’s just not enough to keep your head down and work hard. You have to let people know you exist. And parents want to send their children out into the world with class.”

At present, what I do know exists is the tray of mini cupcakes and chocolate-covered strawberries that Fox has brought along to teach us table manners. (Before becoming an etiquette expert, she studied to be a chef at the Cordon Bleu. Bonus!)

Fox describes herself, as the host of the tea party, as “the Queen.”

That means we can’t eat until she does first. We learn that, while dining, nothing should be on the table except for what is needed to eat. (I secretly move my BlackBerry onto the chair next to me.) We learn how to wipe our mouths properly (you blot, not wipe).

My daughter pays attention as Fox tells us to take “petite little bites” and that there should be “no animals at the table.”

When my daughter needs a washroom break, Fox explains how she should say, “May I be excused?” and then must push her chair in, so others won’t trip on it.

I especially liked Fox’s “ABC rule,” which is that we should never see food that’s “Already Been Chewed.” I also liked the rhyme “Mable Mable, no elbows on the table.”

When my daughter comes back and starts saying, “Mommy! Mommy!” while Fox and I are in the middle of a conversation, Fox tells my daughter, “No talkus interruptus.”

It’s not just my daughter who learns. I learn that if someone asks to pass the salt you’re always supposed to pass both the salt and pepper. (Who knew?) I learned if you’re at a dinner party and you want seconds, you should never ask. You must wait until the host asks if you want seconds.

It’s not just girls who take Fox’s classes, which feels like a short visit to a finishing school.

“I had seven boys recently come in who were nine and 10. They were not happy to be there. Their mothers had gotten together and made them go. By the end, the boys were saying, ‘This isn’t the worst thing,’ and, ‘That wasn’t so bad.’”

She will also teach “good manners at home,” which includes bringing in the mail, flushing the toilet, making your bed in the morning and neatly lining up your shoes just inside the door. As an interesting side note, Fox has also taught etiquette to the Toronto Argonaut Cheerleaders.

“It was mostly on how to keep men away nicely.” She laughs. “I had to teach them if someone leans in for a hug to stick their hand out to shake their hand instead.”

There is only one downside to teaching your children etiquette.

“Mommy, Mable, Mable, don’t put your elbows on the table!” my daughter said later that night. And, the following morning at breakfast, she told me to “sit properly.” Thanks Louise. Thank you very much.