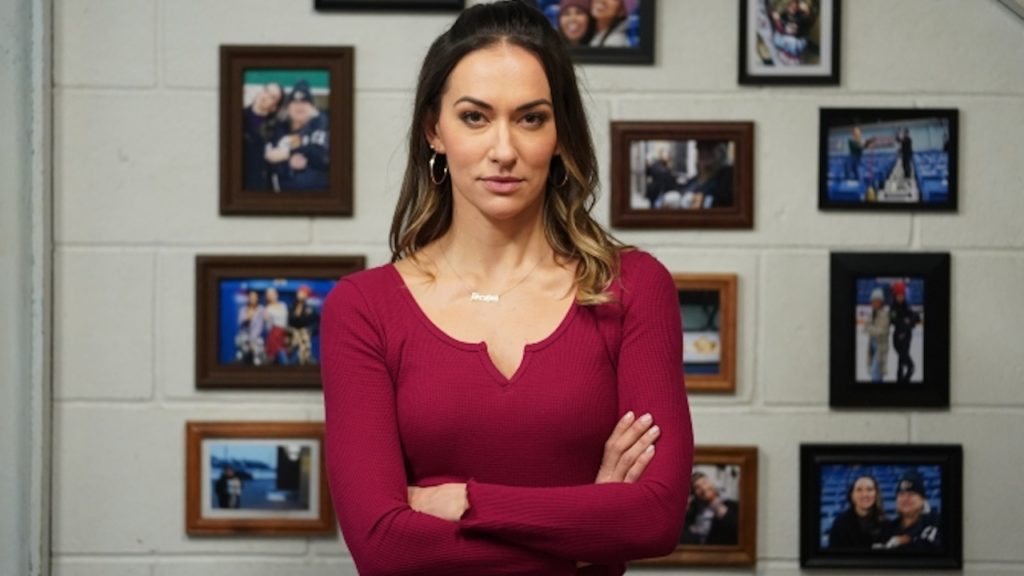 Shoresy has all the things you love about its predecessor Letterkenny — it’s irreverent and coarse, packed with Canadianisms and refreshingly diverse. But there are some new additions to the six-episode spinoff that would draw in even the most hesitant viewer, such as a cast that includes a few former NHL players, a certain Canadian comedy legend cameo — oh, and you’ll finally get a glimpse of titular character Shoresy’s face after 10 seasons of only knowing him by his jersey number and perpetually hatted head. Although Jared Keeso’s foul-mouthed Shoresy might be the reason you turn on the first episode, Toronto’s own Tasya Teles is why you’ll stick around until the last one.

Toronto-born, Vancouver-raised Teles plays Nat, the general manager of the Sudbury Bulldogs, a flailing hockey team she has inherited from her late mother. She’s steely, sure, but she’s a woman on a mission. She’s the kind of person you want on your side. She’s intense and unflinching, and every so often, she makes a grown man cry.

Shoresy premiered on Crave on May 13, 2022. Created by Jared Keeso, the six-part Letterkenny spinoff follows Shoresy (played by Keeso) who has joined the Sudbury Bulldogs of the Northern Ontario Senior Hockey Organization (the NOSHO). The Bulldogs are on a losing streak, and Shoresy has vowed to turn things around for the local team.

For Teles, the decision to join the cast of Shoresy was an easy one. Her filmography dates back to 2013, including some big shows, such as a main role in CW’s The 100, a character in an episode of Supernatural and Prison Break and a few movies in between. But she was itching to break into comedic acting when Keeso got in touch with her agent, asking if she would be interested in the role of Nat.

“That immediately sent this amazing chill down my spine. In a good way. I don’t know, it gave me goosebumps,” she says. “I was like, without a shadow of a doubt, ‘1,000 per cent I am in.’”

Although she has always had an interest in the arts, Teles didn’t realize her love for acting until the end of her university experience. Just before graduating from Concordia University with a degree in finance, she enrolled in an elective acting course, thinking it would be an easy A.

“Immediately, I knew that that was the path for me. It was like the world went brighter,” she says. “I gave myself three years to get a degree in acting on my own, and I trained with all the best teachers.”


Now, as Nat on Shoresy, Teles says she had to tap into an atypical version of herself.

“I think I’m a little crazier than Nat.… Nat definitely is able to keep her cool,” she says. “If they were putting Tasya in there, I might be one of the hockey players. Who’s to say? Or [Shoresy characters] Miigwan or Ziigwan, I don’t know.”

That said, a genuine interest in hockey is something that Teles and Nat have in common.

“I grew up watching hockey with my dad all the time. We were big Canucks fans. And when I lived in Montreal, I was a big Habs fan,” she says. “It has definitely deepened my appreciation for hockey, being on the show.”

And although Nat is pretty unshakable, Teles admits that it’s hard to not break character while shooting with her co-stars. Shooting with Mark Michaels (Ryan McDonell) never fails to crack her up. The same goes for watching Shoresy muster up tears.

“It’s hilarious to me. It looks like he’s about to sneeze, but he’s not about to sneeze, and he just tries to hold it in so hard because he’s such a tough guy,” says Teles. “I feel a tremendous amount of gratitude. I feel very grateful, and I feel very humbled to be working around such talented people.”

Although Letterkenny was filmed in Sudbury for six years, the show itself was set in a fictional town. Shoresy, on the other hand, is set in Sudbury and filled with local talent and local gems. The ice that the Sudbury Bulldogs practise and play on, for instance, is emblazoned with the Sudbury Wolves logo.

Shoresy isn’t the first film production to take over Sudbury’s streets. In fact, Resident Evil: Welcome to Raccoon City and X-Men are among the dozens of productions that have filmed in Sudbury. That said, there is something to be said for a show created by a Canadian, starring Canadians and filmed on Canadian soil, Teles says.

Canada has been the backdrop of countless big-name films, from Mean Girls to Brokeback Mountain and Goodwill Hunting. But it’s very rare that those movies are set in Canada too — meaning our country has masqueraded as everything from Chicago to Kansas. Setting a film or TV show in Canada and having it play the part of Canada, too, is still a big deal — and it doesn’t hurt that Shoresy is chock full of Canadian talent.

“There’s definitely a sense of pride that you get, when you are working amongst Canadians, and you are doing these legacy Canadian projects that are so strong,” she says. “I think Canada has so much tremendous talent. And I think Jared is so smart for utilizing it and giving it a platform because there’s just so much talent in Canada and not enough Canadian projects. We need more.”

As for what’s to come in the series, Teles says we can anticipate some nostalgic cameos, such as Scott Thompson (Kids in the Hall) who is revealed as Shoresy’s dad. And if you think you know how the series will end, think again.

“I think the ending will surprise most people. It certainly surprised me. I think it’s a great ending, but it’s not what I expected, when I was reading through the scripts, for it to end the way that it did. So I’m curious to see what the audience thinks.”