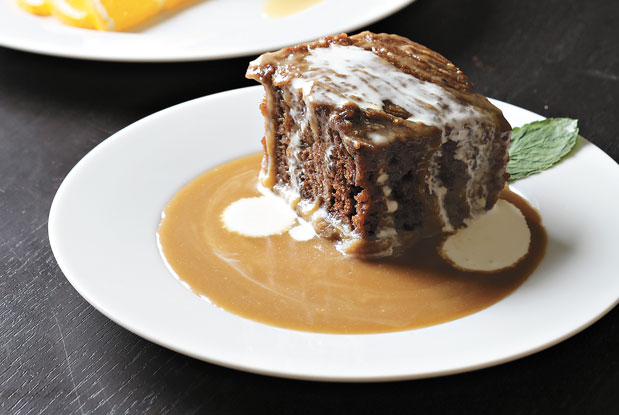 WINNER:
The Ceili Cottage, 1301 Queen St. E., $6
This sticky toffee pudding impresses from the get-go. “I like the height on it,” van Gameren says, “and it’s got just enough dark notes.” Han is taken with the cake’s texture: “It soaks up the syrup very nicely.” Both chefs would prefer less ginger but agree that it’s a winner.

FANTASTICALLY FIRM
The Monk’s Table, 1276 Yonge St., $8
“I really love the sauce,” Han says. “It’s definitely warm and hearty.” She applauds the firmness of the sponge, though van Gameren would prefer larger date pieces in the cake and personally wouldn’t pair citrus with sweet.

FANCY FIND
Falcon and Firkin, 10300 Yonge St., $7
“These ones look fancy,” van Gameren says. He enjoys the thickness of the cream though again would prefer larger date chunks. Han believes correctly that the cake has been baked, not steamed as tradition dictates.

INTOXICATING AROMA
High Street Fish and Chips, 55 Underhill Dr., $4.95
Right away, van Gameren is taken with the smell of the dessert. He notes that it’s sweeter than other picks and suggests adding some stout to the mix to get more malty flavours. Han would prefer less cinnamon.

CARAMEL BOMB
Beast, 96 Tecumseth St., $10
“Holy!” exclaims van Gameren, eyeing the dessert. “Conceptually, I think it’s cool to see it bobbing around in the caramel sauce like that,” he says. Han notes the base could be less cakey. Van Gameren agrees.

SPLENDID SAUCE
The Abbot pub and fare, 3367 Yonge St., $7
This sauce falls more on the thicker side of things, which van Gameren enjoys. Han finds the texture of the cake to be very even but would prefer if it were a touch more rustic, with visible date pieces.

TRADITIONAL TREAT
The Bristol Yard, 146 Christie St., $5
“It’s got a really nice dark flavour to it,” says van Gameren. “The thickness and consistency and texture are spot on,” Han notes. Both note it’s rather heavy and may be hard to finish, but determine it the runner-up.

TEXTURAL KNOW-HOW
L’Unità, 134 Avenue Rd., $10
“Jump in there!” says van Gameren. “You can go swimming in that!” Han loves that the cake soaked up the sauce, and the crunchy pecan crumble topping gets big points, too. “They put lot of thought process into the flavours and texture,” she observes.