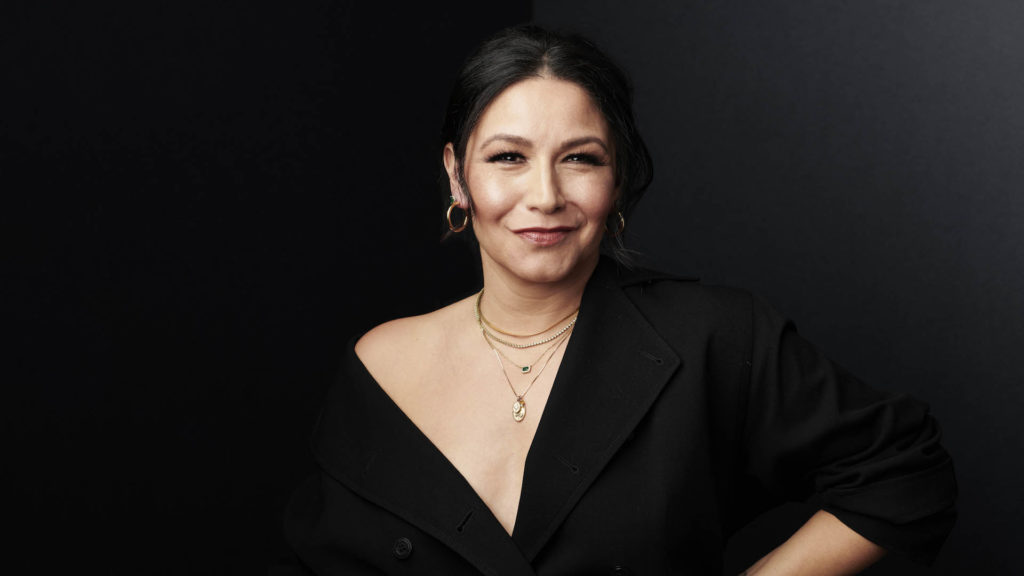 In her most formative years, Tamara Podemski lived for dance rehearsals. The Toronto-based actor and musician compares her school experience to the television show Fame.

“We were in dance clothes all the time. Yeah, it was that dramatic,” she says. “I can’t say the same about the academics. The academics just kind of fell to the side.”

From age eight until she graduated at 18, she attended the Claude Watson School for the Arts in North York, where she was surrounded by aspiring actors, musicians and visual artists. It was there that she performed a traditional Fancy Dance at an assembly in front of her peers — an experience she regards as “claiming her space” as an Indigenous performer for the first time. It’s also where she would meet her first talent agent, who would help her to secure a breakout role as Little Margaret in the Canadian drama film Dance Me Outside. But if you ask Podemski where her love for performing was first sparked, she’ll tell you it was at home.

“I had a family — and a grandmother in particular — who exposed me at a very early age to the performing arts,” she says. “That early influence blew my world open for me to know that this way of expressing myself in the world could bring a lot of joy and connection.”

Podemski is one of three sisters, and all attended the Claude Watson School for the Arts and went on to act professionally. Podemski describes her older sister Jennifer as a mentor and fierce protector. She strived to be the same for her younger sister, Sarah.

“I think, because the entertainment business is so isolating, it makes such a difference when you have people that you can trust,” she says. “Within Toronto there was also a very strong Indigenous arts community, and I grew up under their mentorship.”

Podemski’s artistic career has spanned three decades and includes a Broadway stint as Maureen Johnson in the Mirvish Production of RENT and a celebrated music career that led her to launch her own label and release three albums.

Podemski is known for her role of Deputy Sheriff Joy in Outer Range. And this past month, she appeared in season two of Reservation Dogs, which follows the exploits of four Indigenous teenagers in rural Oklahoma. The season premiered in August in the U.S., and it’s now available to watch on Disney+ for Canadian viewers.

“I got to join the cast for two episodes in this incredible role of Teenie, who is coming back to the rez and grew up with all the parents of the main kids,” she says. “It was nice to be woven into the existing world already.”

Reservation Dogs boasts an all-Indigenous writers room, crew and regular cast. It is a celebration of legacy talent.

“To be on set and you look around the room, and you’re seeing Gary Farmer, you’re seeing Kimberly Guerrero, Sarah Podemski, Danis Goulet — it’s a wild picture.”

Podemski says Reservation Dogs does a good job of emulating what it’s like to grow up on a reservation. That in itself is a victory.

“To get authentic Indigenous representation on the screen, that for sure is a fight, but [there’s] also the beautiful journey of it and how integral it is to self-identify and express ourselves,” says Podemski. “When you’re given the opportunity to self-identify with no restrictions on how people think we should be, it is exercising such a freedom. And it’s pretty unmatched.”

With an extensive filmography under her belt, Podemski is now weighing what she would like to tackle next. She sees herself in comedic roles and aspires to transcend the BIPOC-focused roles she has historically been cast in.

She’s also considering how she wants to introduce her world to her eight-year-old son.

While Podemski thrived in the creative, performance-oriented environment she grew up in, she says it deregulated her in a way and left her without a lot of consistency and stability. It caused her to grow up fast.

At the same time, she has seen firsthand that her son will be coming up in a different world than she once did, among Indigenous actors, writers and directors who are shaping the landscape for the next generations.

“Watching this new generation that’s existing in a new time that certainly wasn’t around when I was younger, it’s just really inspiring and really empowering,” she says.