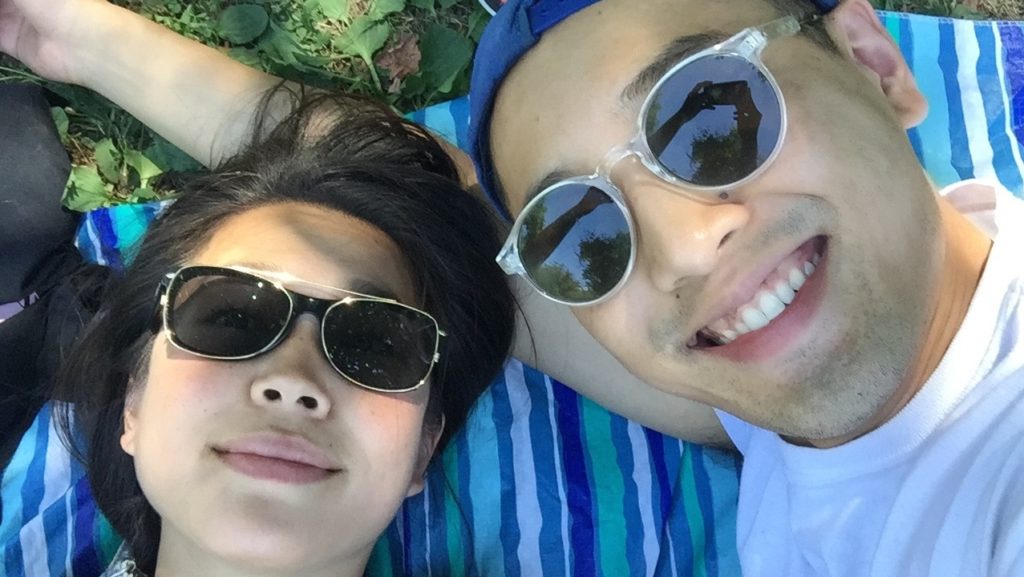 When TallBoyz premiered on CBC  in 2019, it was hailed as the fresh and modern comedy that Canada needed. It didn’t hurt that the sketch comedy show, created by Guled Abdi, Vance Banzo, Franco Nguyen and Tim Blair, was being directed by Kids in the Hall alum Bruce McCulloch. Just after the premiere of the third season of Tallboyz, we asked Franco Nguyen to share the details of how he and his partner, Thao, grew from kindergarten friends to soulmates for life.

We kind of met when we were five. She was in Mrs. Cameron’s class and I was in Mr. Decker’s class. It was like kindergarten’s Montagues and Capulets. But we actually met in Grade 1 when we were both in Mrs. Bobier’s class.

We started at Starbucks and then got some road beers. Then we drank and strolled through memory lane… er … Parkdale. We walked the neighborhood, walked past the old convenience store called Theresa’s and then snuck into our old elementary school. We played in the old gymnasium/auditorium. We talked about our old gym teacher, the game “doctor doctor” and singing “Nuoc Viet Cua Em” during a school concert. We looked at the tiny kindergarten courtyard and remembered how big it used to feel.

We ended up outside on the playground. In fourth grade there was this big concrete cube that was impossible to climb up. But as adults you could get on it with one small bounce. We both got on top and cracked open another couple of road beers. We reminisced and chatted about how surreal it was to hang out with each other after all these years, how our parents used to go to ESL class together. It was nice to just kick it under the moonlight in our elementary school courtyard.

I’d like to believe it was 20 years in the making. I vaguely remember slow dancing with someone during the Grade 4 dance. I am certain it was Thao — Thao is not as certain. When we were in our “crushing” stage, a month before our first date, we went to the CNE with friends, whom we quickly “lost” and were therefore “forced” into an impromptu “date.” At one point, we approached that giant swing ride, where you’re essentially being twirled 60 feet above the ground, and your fate is being suspended by not-so-regulation chains. We were both scared, but we both just said, “Let’s do it!” It was the best time.

Once we started dating, we just spent all our time together. It was tax season 2019, and we were sitting down and sorting our receipts. Thao was helping me, and by that I mean she was doing all the taxes while I was trying my best to not have a complete meltdown. As she was filling out my tax forms, she looked in my eyes and said, “Should we put ourselves under common law”? And that’s when I asked the big question… “Can you just do it? It [the tax] is really stressing me out.”

We are not married. But you don’t need to be married to go on a honeymoon! We’ve taken several trips together. The last one was in March of 2020.  And it was the last one! We went with our baby Felix, but it was unfortunately cut short due to, you know, that global pandemic-thingy.

We have one boy, Felix, and we’re expecting another one in April.

We try to make sure only one of those things is falling apart at a time.