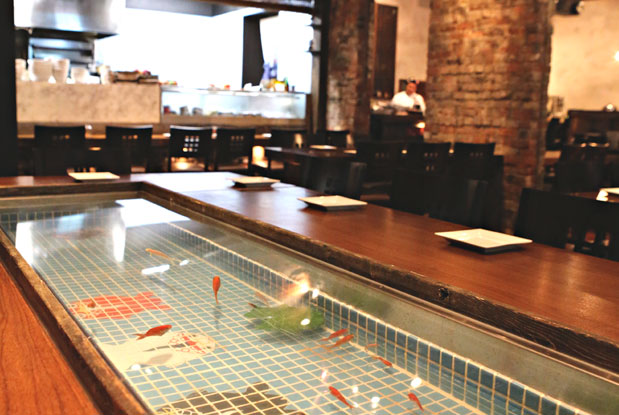 The restaurant space on Winchester Street has been a killer forever. Whoever goes in there sinks like stone. There have been some dogs in that space … and some good ones that also died. What do foodies have against Cabbagetown, other than it isn’t Dundas West?

As the days lengthen, a stroll around Cabbagetown’s mannered Victoriana becomes increasingly attractive. Where else can you have an informal architectural and garden tour whilst trolling for a parking spot? And troll you will, for C-town does not exactly possess a plethora of parking.

Which may explain the kiss of death on Winchester Street.

Which would be so utterly undeserved for Kingyo, an izakaya import from Vancouver. Of which of course we have too many (Guu plus Guu, Hapa, Ramen Raijin, etc., etc.) but not enough of impeccable quality — which Kingyo is.

Who even dreams of paying $4.20 for a zingy app of tako wasabi — raw bits of baby octopus marinated with wasabi stems and kelp, served in a little ceramic pot on a ceramic platter with ultra-crunchy nori in a cunning little bamboo holder. You spoon the octopus onto the nori, roll, crunch and sigh with pleasure.

DIY has never been so much fun. Tajima beef, kissin’ cousin to Kobe but even more marbled and tasty, comes thin sliced, raw, with a sizzling hot black stone. You lay the meat on the stone for less than a minute and dip it in hot/sweet house BBQ or butter sauce, and inhale.

Izakaya restaurants do not traditionally specialize in sushi, which may explain why it’s not what Kingyo does best. Their straightforward sushi is competent and fresh, but I am unmoved by their complex raw fish constructions and would counsel sticking to nigiri and simple rolls. Clearly they’re not adept at doing complicated things with raw fish: witness the uni shooter, which is made texturally weird by a lot of soft, gooey white yam mush.

Cooking is what they do best. Goma ramen salad sounds pretty banal, but is a textural and taste carnival on the taste buds. Chewy, salty kelp ribbons set off sweet BBQ pork, with crunch from cucumber and noodles and deep, rich flavour from sesame cod roe dressing with a hint of sweet rice vinegar. For $7.80!

Meanwhile the place has 120 seats to fill.

It’s a fun room with blinking neon Pachinko machines in niches in the brick walls and lots of goldfish objects because “kingyo” is Japanese for “goldfish.”

And don’t forget dessert. In a sea of unfortunate Japanese desserts, Kingyo does an egg pudding that puts the boots to most of the crème brûlée in town, it’s so rich and silken.

Joanne Kates trained at the Ecole Cordon Bleu de Cuisine in Paris. She has written articles for numerous publications, including the New York Times, Maclean’s and Chatelaine, and she was the Globe and Mail’s restaurant critic for 38 years.