T.O. food writer Amy Rosen temporarily puts down her pen to pick up an apron and open her own cinnamon bun shop - Streets Of Toronto
Skip to content 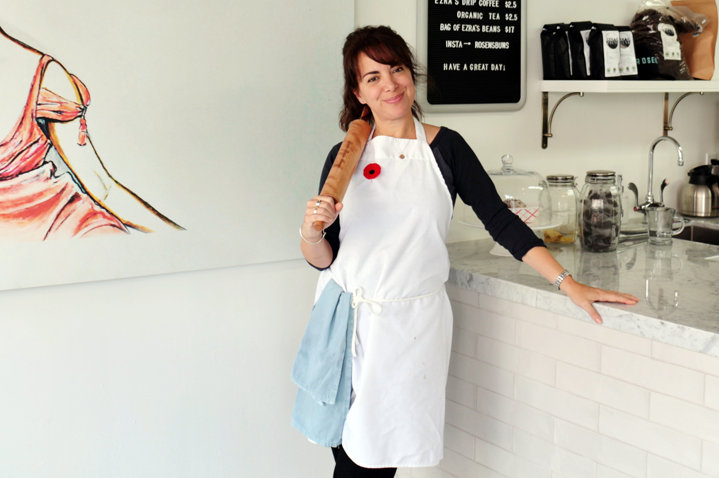 During a gathering at her  parents’ Lake Simcoe cottage last winter, Amy Rosen noticed that her family was behaving strangely. The prolific Toronto food journalist had just cooked breakfast and her normally boisterous relatives were as silent as monks as they ate. Weirdly silent. The culprit, she soon realized, was her batch of freshly baked cinnamon buns, which was being devoured with pointed concentration.

“It was the literal definition of an epiphany,” Rosen says. “Everyone loves cinnamon buns. It’s the one thing we can all agree on.”

That epiphany, incidentally, came at a time when Rosen had been contemplating her future. The James Beard Award–nominated freelance writer had built herself a pretty solid career: she had several cookbooks to her name and had columnist bylines in most major Canadian newspapers. She had been a longtime food editor at both Chatelaine and House & Home and was the first writer to compile En Route’s esteemed Canada’s Best New Restaurants list.

But the thing about journalism is that the work tends to be precarious, especially for freelancers. While Rosen was lucky with regards to steady employment, she knew that her work could dry up at any moment.

A few days prior to the family get-together, Rosen had been pondering these facts with a colleague while on assignment in Provence, France. Sitting on a patio at a local bistro, sipping natural wine, she was feeling philosophical.

“When are we going to take control of our own destiny?” she asked.

Her colleague, a freelance photographer, had been wondering the same thing. So they made a pact: the next time they saw each other, they would have some answers to the “destiny” question.

At Lake Simcoe, watching her family treat cinnamon buns with utter sanctity, Rosen’s path became clear. The time to take control was right then, and the way to do it was with a cinnamon bun shop.

She wasted no time getting started, which sounds about right considering her personality. Rosen, who grew up in a conservative Jewish family in the Steeles and Bayview area, is no stranger to getting things done.

From a young age, she had a knack for writing — was obnoxiously inept at math, she says — so she went to McGill University to study English literature. After that, she did not sit still for long. She went to journalism school at the University of King’s College in Halifax, then trained at Le Cordon Bleu in Ottawa to better merge her two passions (food and writing). She wrote and published her first cookbook, Generation Eats, at age 26.

“A career is like a tree,” she says. “If it’s not growing, something’s wrong.”

Rosen’s cinnamon bun shop went from concept to actuality at a rapid pace. Shortly after the epiphany, she borrowed a KitchenAid mixer from her sister-in-law and began testing recipes  (as the author of three cookbooks, with another slated for 2017, she had some experience with this).

She hosted taste tests. She asked chef and baker friends for advice, and she researched dough. She was as scientific about putting together a recipe as she could be.

Her cinnamon bun uses an enriched bread dough — as opposed to a brioche dough — because it has the right amount of springiness. She uses just a few ingredients, such as organic milk and cream, free-run eggs, sugar and unbleached flour. The bun itself is not so sweet — the sweetness comes from a light glaze and from the “goop” in the middle, a spreadable concoction made from butter, sugar, a bit of salt, a couple secrets and a “s**tload” of cinnamon.

By July, just a few months later, she had a location for a shop near College and Ossington.

After a three-day pop-up experiment at St. Clair West’s Baker & Scone, Rosen’s Cinnamon Buns opened in mid-October. To find it, look for the Hollywood Beauty Salon sign, a remnant of the former tenant that still graces the storefront (keeping the old sign saves money, and it also happens to be trendy in a hipster kind of way).

The small takeout shop does not purport to be multi-faceted. It mostly just sells batches of Rosen’s cinnamon bun, along with bread pudding, coffee and tea.

Sarah Musgrave, an editor at En Route who has worked with Rosen for years, says the concept is right in line with Rosen’s personality.

“It’s enthusiastic, on point and a bit cheeky,” she says. “One of her greatest gifts is managing to be herself and give people what they want at the same time.”

The shop, which sells out of stock on a daily basis, is also a testament to the resilience of those who work in a dying industry.

And the next time someone asks her how she plans to take charge of her future, she’ll have a pretty solid (or rather, a sweet and gooey) answer for them.