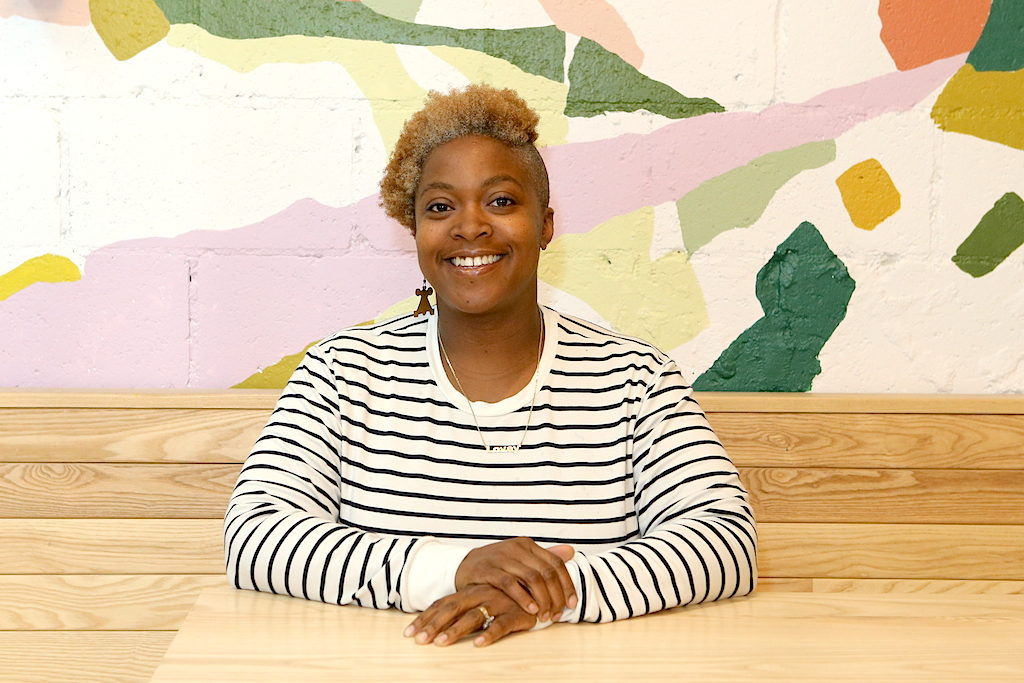 From the outside, 1042 Queen St. E. is still mostly a mystery: large squares of cardboard are taped to the windows; brown paper covers the doors. It’s been like this for years.

But sometime around last year, small signs of life appeared in the old green industrial building at Pape and Queen: If you peek past the cardboard window coverings, you can see sleek new light fixtures. The faded paint was refreshed in a varsity-esque blue and white. The news was out: Suzanne Barr, chef of the beloved but now shuttered Saturday Dinette, was tapped to be head chef of what will become the Avling Kitchen and Brewery.

“I remember [Max Meighen, the owner of Avling] brought me in, and it was very early stages,” says Barr. “It was just walls — a totally gutted spot.”

Now, inside, it’s a pastel dream of light wood and concrete tabletops and cotton candy pink walls juxtaposed with dark cyan accents. The 90-seat dining hall is anchored by a huge 30-seat bar, serviced by 12 taps. But what stuns visitors isn’t the colour palette. It’s the glass wall at the other end of the bar, offering a full, unobstructed view of the actual brewery operation and its enormous tanks, stretching from the basement floor upwards.

Ambitions for the space are community-oriented. On top of the building is a rooftop garden, where beds of soil sit high above the bustle of Queen Street. The idea is to grow fresh herbs and vegetables for the restaurant and the brewery, while also holding public workshops on rooftop gardening.

“We’re putting out food that we know, 100 per cent, what it’s come through in order to get it to that plate,” Barr says.

Her career in food has always been based in health-supportive cooking, paired with a love of globally inspired comfort food. A stint in France turned her on to French country cooking. Influences from her upbringing in Florida routinely find their way onto her plates. Her Caribbean ancestry remains a driving force behind many of her projects.

“We’re a modern brew pub, but we’re a real scope of what the city looks like,” she says.

Barr has not been in the industry as long as many of her peers. She has only lived here for five years. Her first calling was in film and television. It was 15 years into her career, as an executive producer for MTV in New York, that she started looking for a new career direction.

“I needed something more, spiritually,” she says. “I think I had always envisioned that I was going to find a path to something that would see me leave this world of film and do something else.”

After volunteering in the kitchen at an ashram in upstate New York, she decided to take the leap. She completed a course at the Natural Gourmet Institute and quit her job at MTV.  One gig led to another. For a couple of years, she worked as a private chef for a family that split their time between France, the Hamptons, New York City and Miami. Craving stability, she quit private chef work and went back to Florida and then France, where she met her future husband. They moved to Toronto, her birth city. Leslieville was the first neighbourhood they settled in.

“We kept passing this little corner space,” she recalls. “We thought, ‘What is this place? It’s so cute, but no one’s ever here!’ ”

After three and a half years and a lengthy falling-out with their landlords, they closed their doors.

“We weren’t speaking [anymore],” she says of that time. “It was our attorneys speaking.”

Plans to open a lunch counter called Kid Chocolate five doors down on Gerrard St. were scrapped due to building issues”

“I was burnt-out as a chef. I was burnt-out as a business owner, as a partner, and I needed to take a break,” she says. She continued to balance her culinary projects and advocacy work with raising a son. And then she went to Mad Symposium in Copenhagen, to speak about parenting in the restaurant industry.

“I said, ‘If there’s anybody out there looking for a chef to bring onto their team who is as ambitious and as driven as I am, I would take any opportunity to do that,’ ” she says.

The words fell upon the right ears. Max Meighen, whose career was forged in the kitchens of fine dining restaurants in London, had already purchased the Queen and Pape property and was looking to expand his team.

“I knew she and I would have a lot in common in terms of the way we thought about food and how we’d like to see restaurants change,” says Meighen. “That was really exciting from the get-go.”

After the challenges of Saturday Dinette and her other projects, Barr is happy to have found a home. This time, she’s not worrying about clashes with landlords and building issues. Now, her only job is to push the boundaries of how diners perceive brew pub food and to further her mandate of inclusion and sustainability in the industry.

She’s assembled a team of specialists. Her butcher’s whole animal approach and love of charcuterie will ensure that diners will get to try unusual cuts on the plate, manipulated sublimely. Her sous chef is heading up a full fermentation program. And then there’s her comfort food, the backbone of her cooking style. The buttermilk-brined wood-fired chicken is a hit with the staff. A masala-spiked fish and chips is sure to please. And yes, there will be brunch.

As our Front of House training continues, Head Chef @suzanne_barr_food took our staff through our menu offerings. Later in the day, staff members were given a tour of the rooftop garden and were taught how the kitchen team will be making use of everything that is produced on the rooftop.