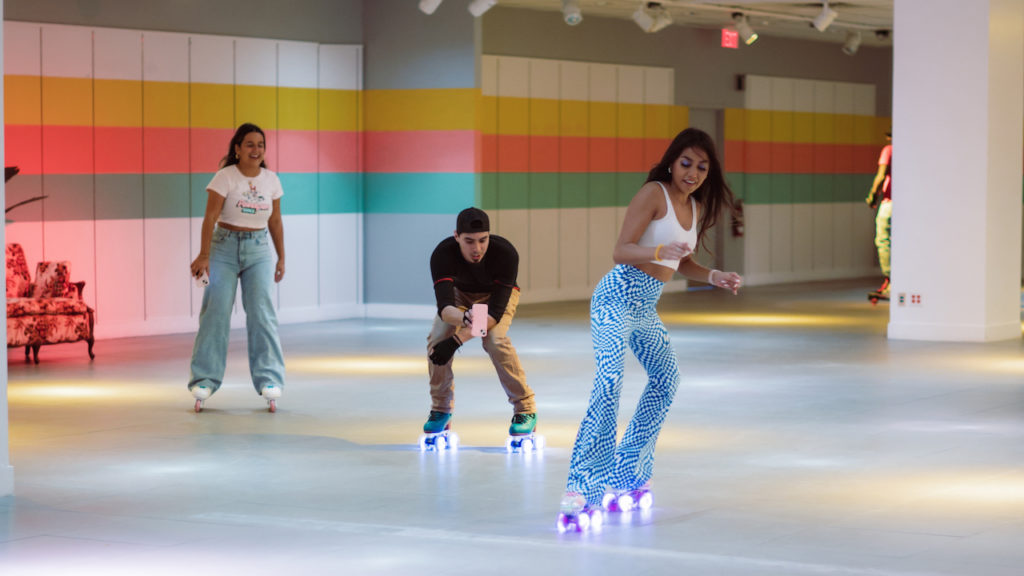 A new indoor roller skating rink from the team behind similar Retro Rolla under the Bentway has officially opened in a former H&M location at Promenade Mall.

“We chose Thornhill, as it’s a diverse community in close proximity to Vaughn and Markham,” said co-founder Janine Bartels. “When the specific location in Promenade Shopping Centre was presented to us, we walked into the space and just knew it was a fit — we couldn’t pass it up for a pop-up”

According to Bartels, she and Henry O’Brien started dating at the onset of Covid, March 2020 and then founded Retro Rolla Skate Club Inc. in the summer of 2021 at The Bentway. Suso evolved from Retro Rolla, which this past summer had a rooftop roller skating pop-up at the Shops at Don Mills.

“We had a very successful first summer at The Bentway, and decided to rebrand to Summer Solstice Skate Club (playing up our unique offering of outdoor rentals) for summer 2022,” Bartels explains. “We never expected to have four pop-ups in a year, but it’s exciting to be able to bring such a vibrant activity to new communities.”


Promenade Mall is located in Thornhill just north of Toronto at the corner of Centre Street and Bathurst Street.

The floor of the rink features large smooth tiles such as one would find in most malls. As a result, SUSO recommends using outdoor/soft wheels on the tiled surface adding that “there is a slight groove between the tiles and it can be slippy with hard wheels.”

“It had been a former H&M store, which meant the tiles were smooth enough to skate on, the existing lighting could be tweaked slightly, and we could utilize their old shelving for our rental skates,” Bartels says. “When we’re only popping up somewhere and have under a month to activate the space, we need to try to be resourceful and utilize what’s currently there. The space is also in the most ideal location in the mall, it’s close to the entrance and right across from the food court so we have a constant flow of spectators watching everyone having fun rolling around.

The rink is a temporary pop-up and at some point, the mall will undergo a massive redevelopment that includes a number of condominium towers and much more.

“We’re currently open until the end of March, and hopefully, we can extend until May,” Bartels says. “We just launched unlimited skate memberships, and plan to host themed events like Disco Nights.”

This is the company’s first indoor location, and for the occasion chose to work with Toronto-based illustrator and muralist Elise Conlin.

“Working with local artists, we reimagine how space is used, hosting visually impactful and high energy skate experiences — creating good vibes and memorable moments for the communities we pop up in,” said co-founder Henry O’Brien.

There will be a lesson schedule posted in January for those who are making resolutions to get more active.