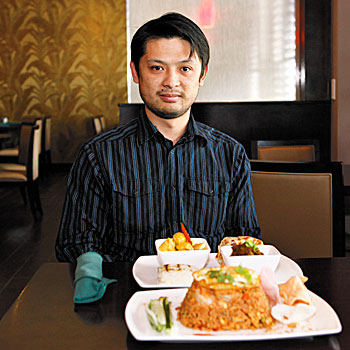 DON’T BE DISTRACTED by the mishmash and unpolished decor: Villa’s kitchen turns out fresh and fabulous Malaysian plates, brought to table by delightful, adept servers without attitude.

It’s hard not to lock eyes with the recessed ceiling lights, which morph through all colours of a neon rainbow and give unusual, almost-sickly glows to guests lounging in purple velvet banquettes or at round and rectangular wooden tables.

Stevie Wonder serenades the families and pairs of pals on a night out. Once Villa gets their liquor licence, maybe the younger set will move to the restaurant’s attached lounge.

In the meantime, a list of refreshing, creative mocktails made with various juices, pops and milks satisfies.

More than two-thirds of the menu’s 37 offerings are denoted as spicy, with a one-to-three chili scale. Only a handful of these can be prepared without the piquancy.

But fret not, the kitchen knows their stuff when it comes to heat.

And it’s impossible to imagine a way the generous assembly could be improved on. This knockout tosses the freshest of snipped spears, diced red and yellow peppers and shrimp floss in a peppy, balanced lime vinaigrette.

From about 10 other first dishes of appetizers and snacks comes ngoh hiang ($8), another success.

Soy skin wraps around a mash of chestnut, crab meat, chopped chicken and shrimp and five-spice.

The roll is immaculately deepfried and sliced, and each of the four pieces delivers enough flavour and texture to render the accompanying plumlike sauce unneeded. A wee “salad” of diced cucumber and tomato slice in a mild, sweet dressing accompanies.

Chili fish prepared with fresh tilapia fillet makes a serious splash in its shallow pool of a just-right hot chili sauce that doesn’t drown out the flavour of the fish — or the still–al dente okra, fennel wedge, onion and tomato alongside. A serving of bang-on basmati stands in as starch.

Our server, Ryan, not only enhances our dinner with a killer smile and practised etiquette, but he makes good recommendations, too — as in curried lamb shank accompanied by soft, teeny potatoes ($22).

The creamy, onechili curry manages to strike a pose between comforting and kicky.

“Shrimp is the secret ingredient!” Ryan tells us of the sweet and nutty homemade peanut sauce that accompanies two skewers of chicken satay.

The small cubes of white meat boast moistness, but, in all honesty, they serve better as vehicles for scooping up more of the peanut sauce. (Other options include beef, shrimp, calamari and scallop.)

Finding Villa Malaysia in the maze of roundabouts and multiple parking lots on York Boulevard may be frustrating, but it’s worth every effort.