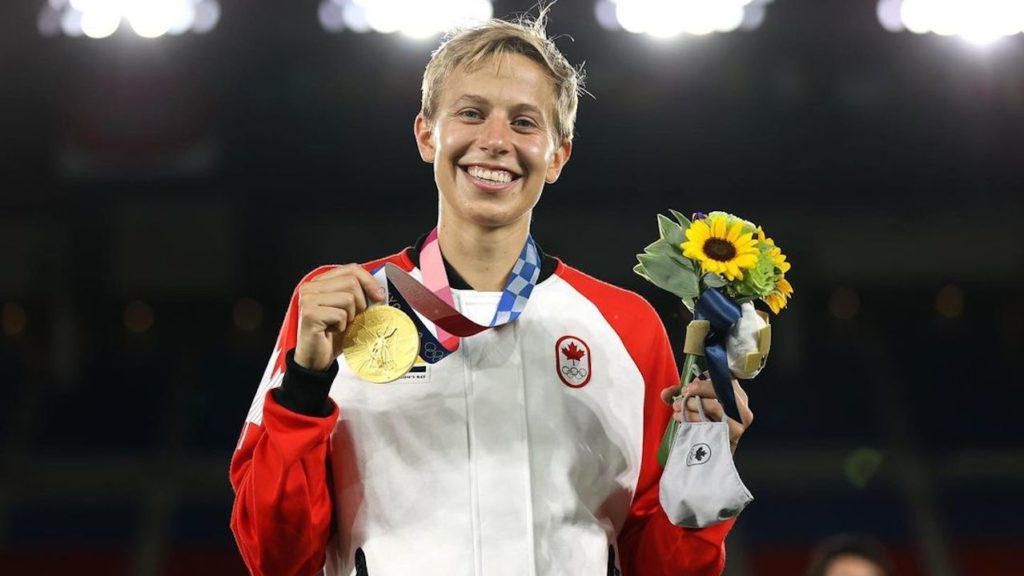 Canada may be a country best known for its winter sports, but this year, our summer athletes have really shone. Team Canada broke records, won medals and shattered barriers, and these Toronto athletes stood out. Here are Streets Of Toronto’s three athletes of the year.

After Team Canada’s penalty shootout win against Sweden in the Olympic women’s soccer finals this summer, midfielder Quinn has made history as the first trans and non-binary Olympic athlete to win a medal. They came out as trans on Instagram a year ago, sharing that they use they/them pronouns and go by the mononym Quinn. They shared a post in July about being one of the first openly trans Olympic athletes in history, acknowledging the many barriers still out there for trans and non-binary athletes. “Mostly, I feel aware of the realities. Trans girls being banned from sports. Trans women facing discrimination and bias while trying to pursue their olympic [sic] dreams. The fight isn’t close to over… and I’ll celebrate when we’re all here,” they wrote.

Penny Oleksiak may be just 21, but she already has a laundry list of accomplishments to her name. She was jut 16 when she became the first Canadian ever to earn four medals during one Summer Olympics at the 2016 Rio Games, making her the youngest Canadian in history to win gold. At the Tokyo Olympic Games this year, she was given another incredible title – Canada’s most decorated Olympian of all time. She earned a silver medal and two bronzes, bringing her career total to seven and surpassing speed skater CIndy Kalssen and speed skater and road cyclist Clara Hughes (each had won six medals throughout their careers). Read Olympic athlete Mark Tewksbury’s tribute to Penny as one of our most inspiring Torontonians in 2016 here.

Andre de Grasse became a household name in 2016 after photos and videos of the track athlete laughing and hugging Usain Bolt, the fastest man in the world, surfaced during the Rio Games. He won a silver medal in the 200-metre race, 0.24 seconds behind Bolt, and then a bronze in the 100-metre behind Bolt as well. The two track stars warmed the hearts of Olympics viewers, with Bolt famously stating that de Grasse is the “one to watch.” He proved Bolt right this year in the Tokyo 2020 Games, where he gold in the 200-metre while lowering the national record to 19.62 seconds in the final. The win was Canada’s first Olympic gold in any track event since 1996. He also won a bronze medal in the 100-metre and secured a bronze for Team Canada in the 100-metre relay. De Grasse’s remarkable wins secured his place among the “greats” of his field and the Olympics as a whole. Read our profile with Andre de Grasse that ran just weeks before his gold medal win this year here.