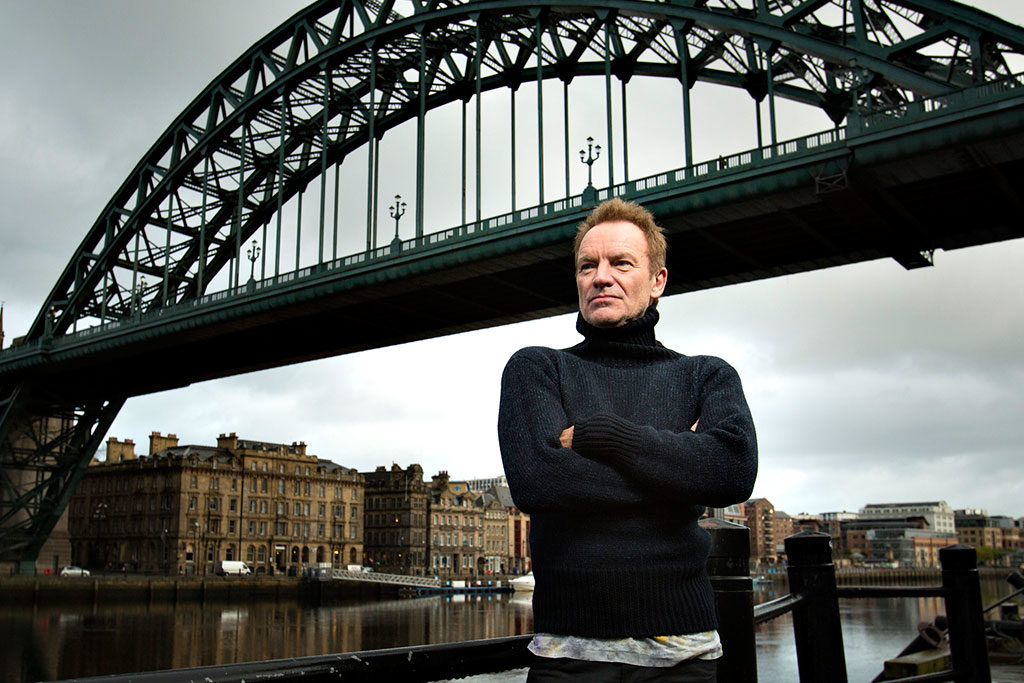 Iconic musician Sting brings his musical The Last Ship to the Princess of Wales Theatre this month, Feb. 9 to March 24, and local audiences have the opportunity to watch the singer perform, not in the lead role but the role of the foreman Jackie White. The English singer best known for his work with the group the Police was on hand for a media preview and answered a few questions last September.

“I’m playing the foreman, because I’m too old to play the lead, the young romantic lead, unfortunately. He gets to kiss the girl and everything, but you know,” Sting says.

“Being given the chance to play the foreman again in Toronto, I felt confident. I also felt honoured and really excited about doing it.”

The musical explores Sting’s relationship to the town of Wallsend where he grew up, an area famous for its shipyard.

“Some of the largest vessels ever constructed on planet Earth were built right at the end of my street,” he says. “Some of my earliest memories are of looking down south toward the river and not being able to see the sun, except for this massive bow of a giant ship.”

The first incarnation of the musical fared poorly on Broadway, but the show regrouped and with a new book (libretto) launched in England to resounding success.

The works of one of the world’s most influential artists, Ai Weiwei, will be featured at the Gardiner Museum this month. It’s appropriate that the artist has an exhibition at the ceramics museum, as he is well-known for breaking convention and quite a few pieces of pottery in works such as Dropping a Han Dynasty Urn (1995).

“Ceramics are fascinating. I love the tradition, how people for generations have tried to make something happen with this basic language of communication, besides its practical uses,” says Ai Weiwei.

The exhibit, Ai Weiwei: Unbroken, will feature many of the artist’s most celebrated works such as Sunflower Seeds (2010), Han Dynasty Urn with Coca-Cola Logo (2015) as well as new works.

One of Toronto’s most beloved actors, Nicholas Campbell, returns to a local stage this month in the lead role of the Tony Award-nominated drama The Father by Florian Zeller.

“It’s a fantastic play. I guess everybody says that, but this one in particular is,” says Campbell, on a break from rehearsals at the Coal Mine Theatre. “It’s really terrific how he crafts it. It’s very entertaining, and funny.”

The play is an honest and humorous look at the realities of living with Alzheimer’s through the eyes of a man in mental decline. It hits home for Campbell.

“I’m 66 this year and I’m starting to get concerned,” says Campbell. “This play is comforting in a way, and also disturbing.”

The Father runs from Feb. 10 to March 3 at the Coal Mine Theatre.

*The dates have changed from a previously published version after reports came forward that Nicholas Campbell had taken ill (he is expected to make a full recovery). Street Legal actor Eric Peterson will stand in for Campbell with eight more shows added.

For a nice change of pace from the slushy season in the city, we might consider casting our eyes across the pond to Paris. And the Art Gallery of Ontario has just the exhibit.

The AGO’s Impressionism in the Age of Industry: Monet, Pissarro and more opens on Feb. 16 and features more than 120 artworks, including numerous loans from across Europe and North America. The new exhibit concentrates on the vibrant, changing world of Paris in the 1870s and how Impressionist artists of the age used to painting delightful landscapes adapted to the surge of industrialism and increased pace of life.

“This exhibition invites us to journey through this period of immense change, experiencing its thrills and challenges alongside the artists. As our cities and technologies rapidly change, it’s a journey that continues to resonate today,” says Caroline Shields, the AGO’s assistant curator, European art. The exhibit runs until May 5.