Step into a different era at Community 54 (and while you’re at it, get your NBA Jam on) - Streets Of Toronto
Skip to content 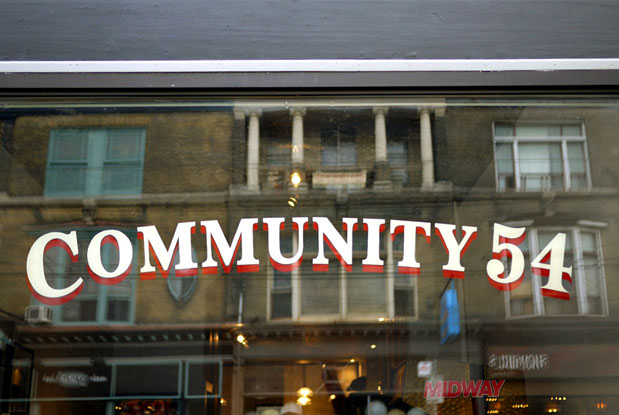 “The concept of the store draws on the Studio 54 era,” explains Trung Hoang as he sweeps the shop floors. “Not disco per se, but more about the creative community within it.” Hoang is the editor of digital magazine Contra, and has just joined forces with owners Daymon Green and Jason Jacobs to bring New York’s Lower East Side boutique, Community 54, to Toronto’s Parkdale.

This second location mirrors its American counterpart from the outside in. Both are situated in areas with a creative community, and both sell new and old clothing, accessories and interiors — “mantiques” as Hoang likes to call them, like vintage arcade games, which can also be played in-store — that embody the ‘70s, ‘80s and ‘90s. “This is not a franchise,” Hoang is eager to point out. “We are keeping the integrity of the local community. Look at the Canadian flag (draped over the change room), and we feature local artists on our walls.”

On the rails you will find Members Only jackets, most notably the black leather “Fool’s Gold” jacket designed by Canadian superstar DJ A-Trak, which retails for $775 and is an exclusive to the shop.

Heritage brands include Mitchell & Ness (a sports apparel brand that has been around since 1904), Danner hiking boots and Crown Cap (making furry Canadian hats for nearly 80 years). A specialty is the strap back caps that line the walls, while the vintage section focuses on Polo Ralph Lauren, Tommy Hilfiger and Woolrich. So, why was Toronto chosen for a second location? “Everyone is looking at Toronto right now, especially with the music that’s coming out of here,” Hoang says. “In New York, everyone is talking about Toronto like it’s a new exciting place.”

With its mix of nostalgic Canadian and American brands, this shop — with its New York-cool vibe and deeply-rooted maple leaf patriotism — is a welcome addition to the city’s west-west-end.