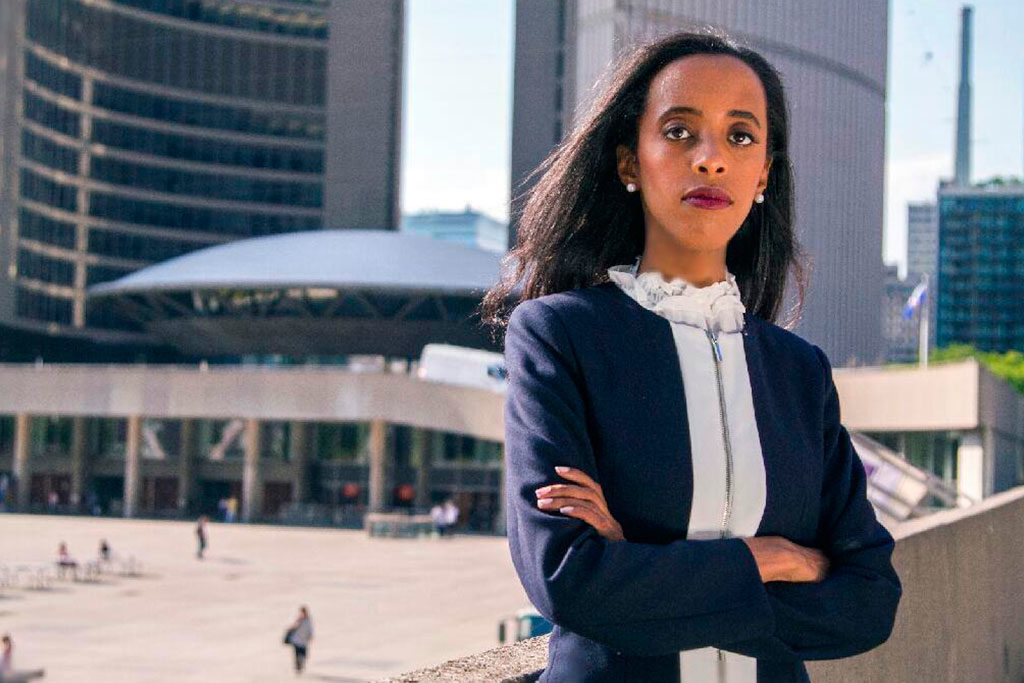 What is your idea of perfect happiness?
Where one is completely content in the moment.

What is your greatest fear?
My motto has always been fearlessness. But snakes. I’m actually really terrified of snakes.

What skill would you most like to have?
I wish I could play the violin.

What person living or dead do you most admire?
Nelson Mandela. He symbolizes triumph over adversity.

What made you decide to run for the New Democratic Party in the next federal election?
I think the Conservatives are loading up the ammunition for a federal sweep, a hostile takeover of the country.  So now, more than ever, more people need to run. After the [Toronto mayoral] campaign, our team, we didn’t want to stop. So we are going to throw our hat in the ring for the federal election and win a federal seat.

Are you a fan of Jagmeet Singh?
I am. I used to see him in Brampton court a few years ago. He made history in our country, and I think all Canadians should be really proud that for the first time in the country’s history we have an opportunity to vote for the first visible minority prime minister. I think that will inspire a lot of Canadians.

What prompted your new lawsuit against the Children’s Aid Society?
The provincial government announced that we will be losing  the child advocate’s office, which acts as a watchdog over Children’s Aid Societies in our province to monitor their activities and what goes on in those agencies in light of the fact that there is a disproportionately high number of apprehensions [children taken from their homes]. We took that opportunity to launch the lawsuit to bring light to the issue around systemic racism at the agency. African-Canadian children, First Nations children are overrepresented in child apprehensions. We have had a number of former child wards, kids that have been apprehended by the agency who are now adults, come forward and explain what happened to them.

What are you hoping will happen as a result?
The agency has such a long history in our province and across the country and a pretty troubling legacy. The purpose of the lawsuit is to bring that to light. We are calling for a complete overhaul of the agency and a moratorium on child apprehensions until it is audited by an external auditor.

You’ve been working on the issue of gun violence in Toronto since you were 15. Why did you first get involved?
We had the summer of the gun in 2005 that ravaged the city. Growing up in TCHC [Toronto Community Housing Corporation housing], growing up with gun violence was nothing new. It was just part of life, and early on I just wanted to be a part of the solution, and that’s how I ended up meeting with [former prime minister] Paul Martin at the time, calling for the same solution I’m calling for right now.

Why can’t our politicians get this right?
I think honestly our politicians are so disconnected from reality they just can’t relate to these communities. You’ll never see John Tory or other city councillors in Toronto community housing. They’ve never lived there, and they’re not familiar with gang culture.

What do you think your mayoral campaign accomplished?
It did send a signal. People around the world saw something very powerful happening in Toronto even though Toronto mainstream media didn’t pick up on how symbolically powerful this was. People saw this as a David vs. Goliath kind of battle happening where we were actually succeeding, kind of winning the popular vote in some ways. That was really surprising, and it was really gratifying to have won some of those debates despite all of the barriers. It was a battle with Toronto’s deep establishment.

What did you bring to the table?
A number of things that had never happened before. There was never a Toronto politician, in our city’s 184-year history, delivering a speech in six languages. That’s just not happened before. I think the campaign brought so much richness to Toronto — championing the arts, speaking out for youth and working with inmates. So, all in all, really successful.

Yet, at the end of the day, we are left with basically the same city council makeup, just fewer of them. When will change come?
My vision of the future of our city is that we have representation not just ethnically, but real, normal working-class people — single parents, young people. It is just so unhealthy to have a city hall that is so insular. We are missing out on so much talent. We need ordinary people to trample over the gatekeepers and storm through the doors.