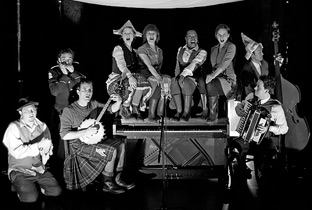 Regular readers of my monthly theatre reviews in Post City Magazines must get exhausted from my frequent praise of Soulpepper as the most consistently exciting theatre company in Canada. But how can I stop raving? When one wants to experience deeply moving (and often very funny) Chekhov plays, or even Shakespeare (such as the delightful, music-filled version of A Midsummer Night’s Dream), the Distillery District is the place to go.

But who knew what charm, professionalism, physicality and wit was awaiting my wife and I at Soulpepper’s present double bill, a back-to-back of two one-act plays including (re)Birth: E.E. Cummings in Song and Window on Toronto? (Both run until June 18, so you have little excuse to miss this amazing evening.)

The lesser of the two, using the optimistic, fun-filled poems of the popular 20th century American poet E.E. Cummings, is filled with pleasure and surprises, even if it is often far from magical. The touching, coy and occasionally precious word-play of the famous New Englander is an acquired taste, but the young performers set these haunting, often laugh-out-loud poems to music (instruments range from accordions to drums to a delightful toy frog being squeezed). It’s nearly an hour of original music — all under the fine musical direction of actor/horn-player Mike Ross — and thoughtful stage movements around sheets, shadows, marches and embraces. Too many times, the songs clash with the beauty of the poetry (which was not written to be set to music, of course), but (re)Birth is a sweet one-act leading up to the grandeur of the truly original, hysterically funny and awe-inspiring second-half advertisement for this marvellous city, Window on Toronto.

The naturalistic beauty of the opening of this vivacious one-act is sheer perfection: actor Jason Patrick Rothery lifts a tiny square window toward us (all the action is seen by the audience through this opening; try to land seats in the centre of the small theatre), as water drips and drains off it. We join the proprietor of a hot-dog stand in Nathan Phillips Square in watching, quite literally, life go by in our grand town: the immigrants from Asia and the Caribbean; the old lady who keeps staggering into view, asking if a corner store once stood in this place; rollerblading youth, young lovers, people lost, people found and more — a baby is born, someone dies, a year goes by. And the audience never stops laughing, because the acting of the Soulpepper Academy members (Ins Choi, Tatjana Cornij, Ken MacKenzie, Gregory Prest, Karen Rae, Brendan Wall, Trish Lindström and Rothery) is so professional, so balletic, so powerful, so funny, you’ll be on the edge of your seat. When the frenzy finally stops, you’ll appreciate Toronto more than you ever have, and you’ll love Soulpepper even more, as well.

Now, how to talk a director at CBC, CTV or Global to capture this gem on videotape for eternity? What a perfect little one-act this is!