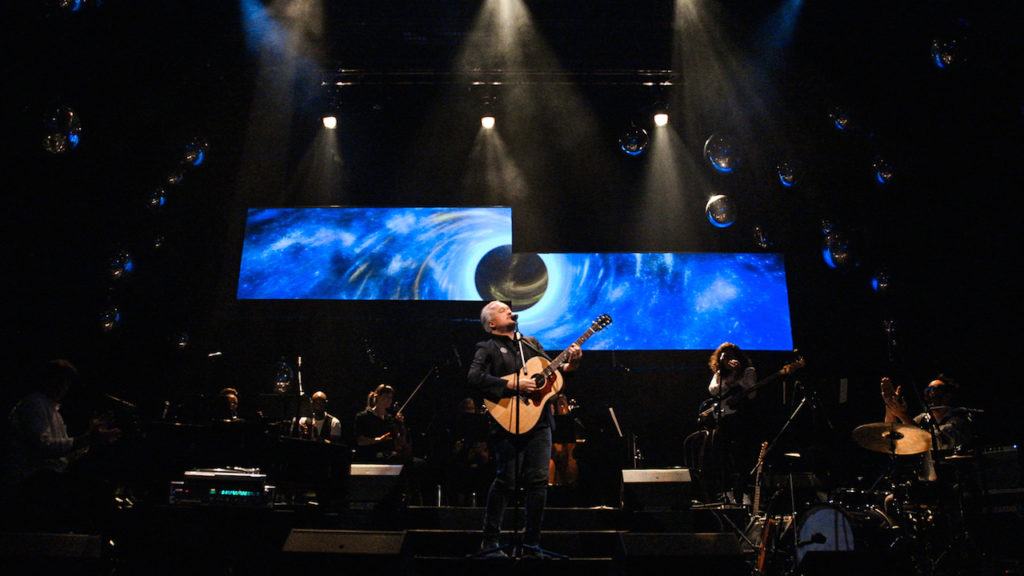 I wasn’t sure what to expect with Soulpepper’s latest show The Golden Record, but I knew I would be entertained. I didn’t do any research into this unique tidbit of history that provides the backbone to this production, instead what drew me in was the cast featuring five of the company’s musical theatre artists extraordinaire in Divine Brown, Beau Dixon, Raha Javanfar, Travis Knights, and Andrew Penner in addition to Soulpepper’s music director Mike Ross. They do not disappoint

There hasn’t been a Soulpepper concert performance since before the pandemic in 2019. It’s long overdue, and a welcome addition to the fall theatre season. And this show is a fine example of what this team can do.

The show starts out a bit slowly with the opening song “Starman” by David Bowie moving into some dialogue about a weird time capsule project from the 70s. But as the audience learned more about the Golden Record project, and started to get a feel for what story this production was trying to tell as it related to it, things started to get very interesting and very entertaining.

For background, the Golden Record is a 12-inch gold-plated disk that was sent into the far reaches of outer space with the Voyageur space shuttle in 1977. It contains sounds and images designed to give an idea of the life and culture of the earth and humanity to any alien life forms that might find it. Apparently, it’s still clanking around up there, the Golden Record and all the photos representing humanity ready to be found by some alien life form or another.

The Soulpepper production is a unique take on the project. It intersperses commentary from those involved in the project most notably Carl Sagan, as well the cast members’ interpretation of the Golden Record. So, yes there were songs that made it onto the record, songs that perhaps should have been included, and songs that were more about telling this particular story.

The entire cast with the addition of a small string quartet is on the stage throughout the production. The principal cast members take turns reading snippets of surprisingly interesting and thought-provoking commentary, taking the lead on songs, dancing, swapping instruments and generally just displaying an awe-inspiring level of talent.

Some of the many highlights include a breathtaking performance of Nina Simone’s “Sinnerman” sung by Divine Brown, with dance accompaniment by Travis Knights as well as a barn-burning mashup of Chuck Berry, Stravinsky and Beethoven featuring Raha Javanfar. But, Andrew Penner’s performance as well as the brilliant and frightening interpretation of CCR’s Bad Moon Rising stirred me to my core.

The production is about this record created to represent our world and our humanity, but it’s also a look at and a plea directed at humanity right now. What we’ve done to our home and what we need to do to make it right. That’s what this story is about and why it’s important to see it while you can. Go see this show, and support the continued work of this incredible crew at Soulpepper.