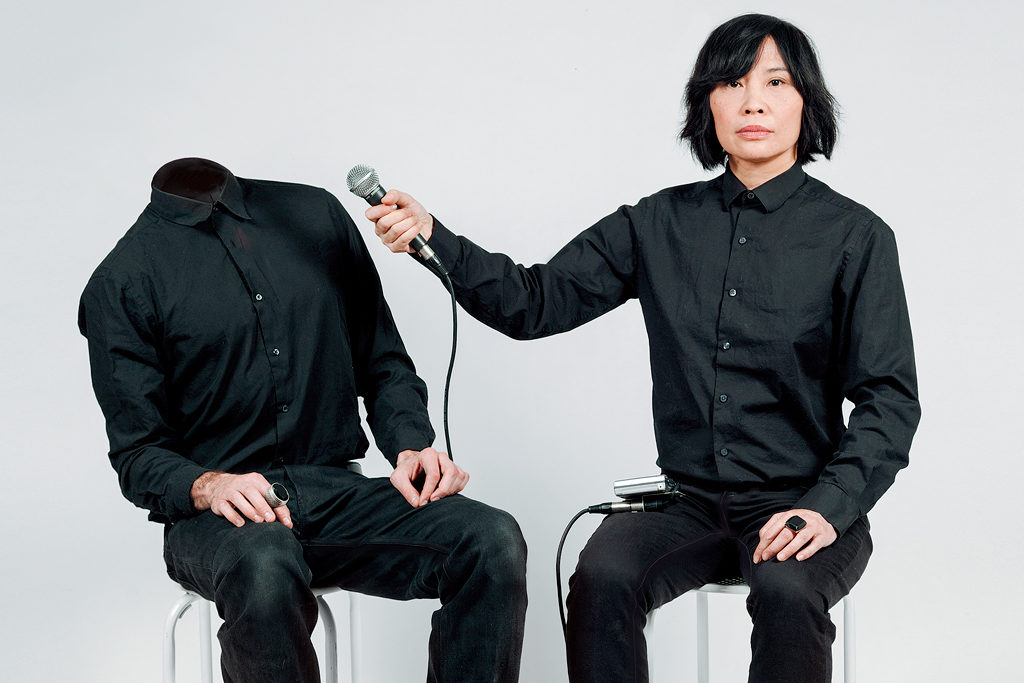 The show was developed by Lee during a residency with Canadian Stage and is an exploration of censorship in the arts in Canada, performed by Lee and collaborator Christo Graham. Lee’s time in broadcasting, film, music and theatre informs her work on this issue — she has experienced various forms of censorship throughout a career, that has seen her go from VJing with MuchMusic to walking the red carpet at the Cannes Film Festival, where she had a starring role in the daring feature Shortbus.

“Unsafe is dangerous because it reveals the personal cost and consequences of opening up a difficult conversation,” says Lee. Part of that conversation is conducted through the show’s various documentary-style video interviews with big-name Canadian artists who have experienced silencing and/or censorship, including singer Jeremy Dutcher and playwright George Elliott Clarke.

“Unsafe is grounded in the broadcast interview form, which I consider to be one of my artistic practices,” Lee says. “It delves into the tension between our desire for freedom and the need to control.”

Unsafe is at the Berkeley Street Theatre, March 12 to 31.

Dear Evan Hansen
A smash hit on Broadway, this new musical is making its international debut at the Royal Alexandra Theatre. Dear Evan Hansen is the dark, offbeat story of a lonely teen who tells a life-changing lie about a deceased classmate that both revives and ensnares him.

Written by musical wunderkinds Pasek and Paul, who already have an Oscar, a Grammy and a Golden Globe to their names, this acclaimed show won the Tony Award for Best Musical, along with five more Tonys (one of which went, of course, to Pasek and Paul).

In Toronto, the lead role will be played by Vancouver native Robert Markus, who recently finished a stint as Riff Raff in a Stratford production of The Rocky Horror Show, so popular that it was extended until it became the festival’s longest-running show ever.

Markus competed with more than 800 hopefuls to score the part of Evan, so his take on the character is sure to be worth seeing.

Robyn
This Swedish chanteuse has held on to pop superstardom since first breaking out in the ’90s. If you don’t recall her early hits — “Show Me Love,” “Do You Know (What It Takes)” — you’ve at the very least probably been exposed to the video for “Call Your Girlfriend,” in which she gyrates wildly in a massive abandoned warehouse. The video spawned a number of spoofs, including a viral take by the Saturday Night Live cast.

In Toronto as part of her tour for Honey, released last year, Robyn brings her eminently danceable songs to the Rebel, and we predict one-of-a-kind costumes and glorious, spoof-worthy dance moves.

Robyn will be at the Rebel on March 14.

The Second City Guide to the Symphony
The symphony is serious business, no? Well, it depends on who you ask. If you’d like the opinion of, say, Colin Mochrie, you might find a few cracks in the solemnity of this treasured musical institution.

Mochrie, of Whose Line Is It Anyway? fame, is leading a troupe of Second City players in The Second City Guide to the Symphony at Roy Thomson Hall, with TSO conductor Steven Reineke as their straight man.

The show blends sketch comedy with classical music in a satirical assessment of all things symphonic. When it debuted in 2014, it earned a rave review from the Toronto Star, where the theatre critic called it “The funniest two hours I spent in a theatre this year.”