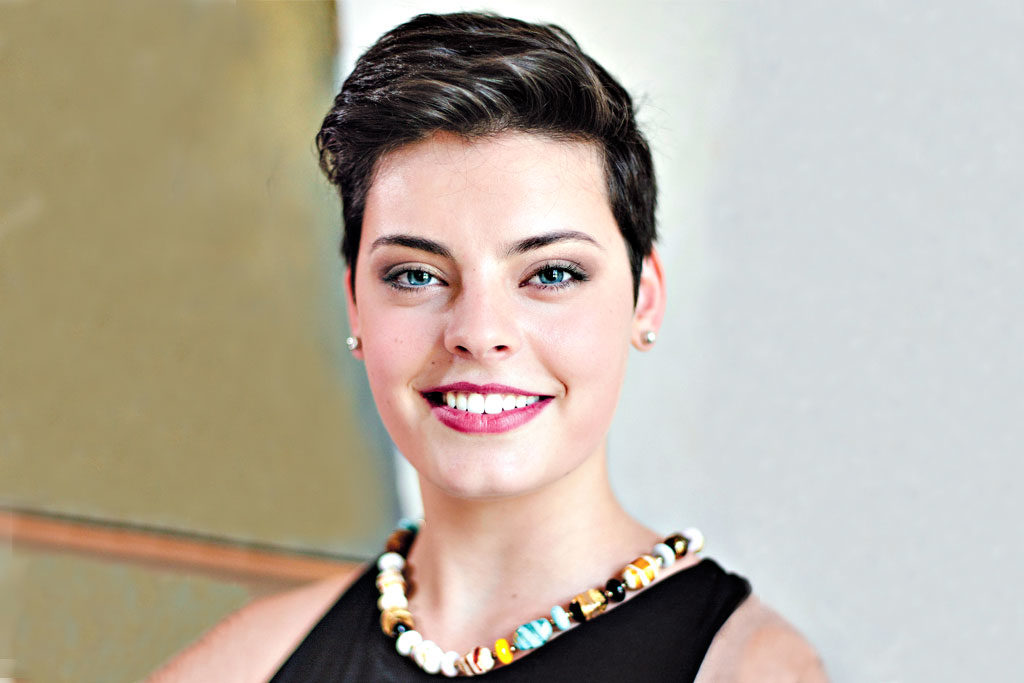 Emily D’Angelo’s operatic talent is undeniable. In the past two years she has experienced a meteoric rise in the opera world, winning numerous international competitions and establishing herself as one of the most virtuosic up-and-comers on the scene.

The young mezzo-soprano readily admits that this path was unexpected.

“I never thought opera was something I would pursue as a career. I just loved doing it,” she says. “I did a lot of math and science, so that’s what I thought I was going to pursue.”

Growing up, D’Angelo sang with the Toronto Children’s Chorus for nine years. While a student at North Toronto Collegiate Institute, she played the cello. D’Angelo says Deborah Pady, who taught strings, encouraged her to pursue music after high school.

“She really encouraged me to pursue the cello, and it’s really helped me with singing and everything in music in general, just having that secondary instrument,” says D’Angelo.

When she was 15, she began taking private singing lessons with Elizabeth McDonald, a sessional lecturer in voice at the University of Toronto.

The idea to audition for U of T’s music program was the result of gentle probing from McDonald.

“I did have a backup, just in case. I applied to life sciences.”

D’Angelo auditioned for the program, but also had a plan b.

“I did have a backup, just in case. I applied to life sciences.”

But a career clothed in a lab coat was not to be. Now, newly graduated from the University of Toronto with a bachelor of music in voice performance, the young singer’s career has taken off.

After winning both first prize and the Audience Choice Award at the Canadian Opera Company’s (COC) Ensemble Studio Competition, D’Angelo has earned a coveted spot in the company’s Ensemble Studio. D’Angelo will make her North American debut this season with the COC.

Currently she is the understudy for the title role of Ariodante at the COC. She will also sing from Rossini’s Giovanna d’Arco as part of the Generation Next recital held at Koerner Hall in November, and play Zweite Dame in the COC’s production of Mozart’s The Magic Flute.

The Ensemble Studio will also travel to schools across Ontario performing the eco-conscious children’s opera Second Nature, for which D’Angelo is currently in rehearsal for.

“I’m very excited about it,” D’Angelo says, “I’m a tree-hugger myself, so it’s been fun to have that in an opera. So much of the poetry we sing about is about nature, but this is really explicitly about saving the earth, which is something that’s new.”

With a busy schedule ahead for the next few months, there’s no doubt D’Angelo will face it all, singing.