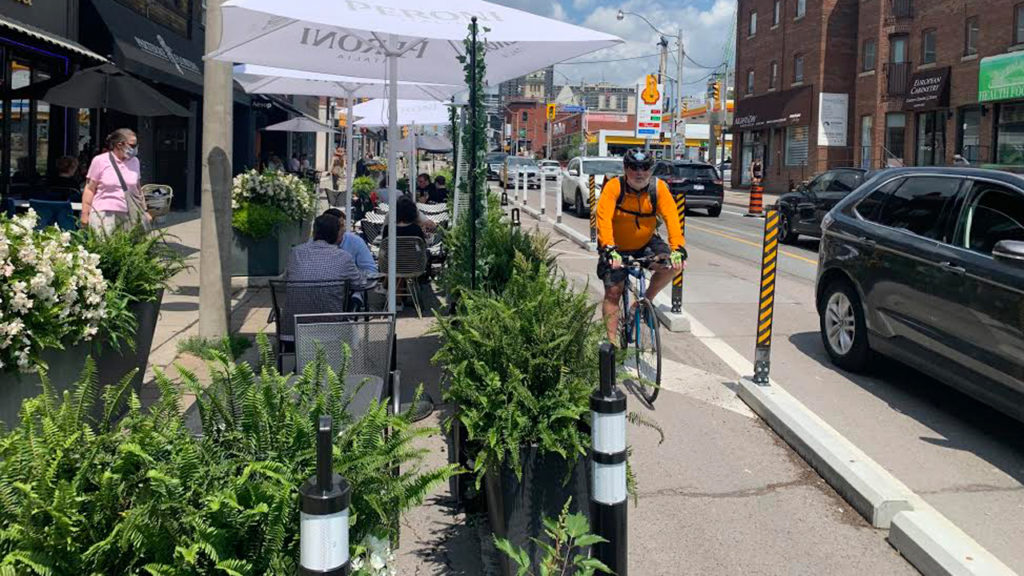 As soon as the Yonge Street bike lanes were under construction, people began complaining as the traffic slowed to a crawl. But that was then, and now that they are open people have begun to embrace the public infrastructure project that, along with CafeTO patios, has brought new life to midtown Toronto. Although the ActiveTO bike lanes and the CafeTO patios are temporary, many are wondering if they can stay — permanently.

We posed that question to a city councillor who thinks the projects do not work and a former chief planner who thinks it would be tragic if the city removed them. Here’s what they had to say:

I voted against this midtown project because it goes back to the fundamental concerns I have regarding the ability to access the downtown core for purposes of work, entertainment, commerce, shopping, or whatever it may be for individuals that don’t live in downtown Toronto. As a member of the city council that represents the community in the west end of the city, we enjoy our access into the city, and I want to see that continue. So the Yonge Street proposal in midtown is among a number of proposals that have either been implemented or are being looked at to reduce motor vehicle access into the city. And this particular proposal involves the closure of active lanes of traffic on Yonge. And to me, that is a very high bar to change.

I would also say that part of the context is the post-pandemic return to work. The Board of Trade just announced their We’re Ready, Toronto campaign for returning downtown employers. And you have to wonder if a lot of people have become really comfortable working at home and would be thinking about these simple things like what the commute to work is going to be like, coming out of COVID-19. And [with] additional changes to the roads that have occurred over the last few years — such as closing down King Street to through traffic, the reduction of Bloor Street, and now the reduction of lanes on Yonge Street — I’m worried about the future vitality of the downtown core. Even with projects such as Bloor Street and the Danforth there were metrics, public consultation, and the number of cyclists already using that corridor was 10 times the number on Yonge, at least, where there are literally thousands of vehicles coming into the city. There is no data here; there is no public consultation.

This move was political in nature. Public transit can’t be the solution for everybody, as much of a goal as that is for practical reasons. And so having road access in and out of the city is vital to our continued success and to our economic recovery.

Yonge Street is an iconic street in the city of Toronto. For quite some time, we’ve treated it in many parts as a bit like a highway. What’s so powerful about both bike lanes and CaféTO is that it is about turning Yonge Street back into a destination. There are parts of Yonge where it’s a very wide street, so there is the extra right of way and extra asphalt, which can be better used to serve the needs of local neighbourhoods. I think the biggest driver behind making both CaféTO and the bike lanes permanent is about creating better places for the increasingly higher-density neighbourhoods that are very pedestrian-oriented.

We are also going to be going through a period over the next several years where we’re going to have to aggressively encourage transit use.

On some corridors, you can make the argument that you need to maintain the transportation capacity of the corridor. But you can’t really make that argument on Yonge because Yonge has this phenomenal state-of-the-art infrastructure running below it. The subway is by far the best way to get downtown. I might add that all of the data that we’ve seen has made it very clear that the number one reason people don’t ride their bicycles often in the city is safety. People don’t feel safe. Over the course of the past 12 months, we went through this exercise with ActiveTO of putting pilots in place and making our streets much more safe for cyclists. And every time we do that, we see an explosion of Torontonians taking us up on that offer of cycling around the city. So we’ve got great data. The best way to make cycling safe and see an exponential increase in cycling is to put that infrastructure in place. And of course, the midtown bike lanes should be made permanent. It’s a little bit of a cruel trick to make it safe to cycle for a short period of time and then to take it away. It’s almost like putting a swing in the park and all the kids love the swing and then you take the swing away, but with graver consequences.