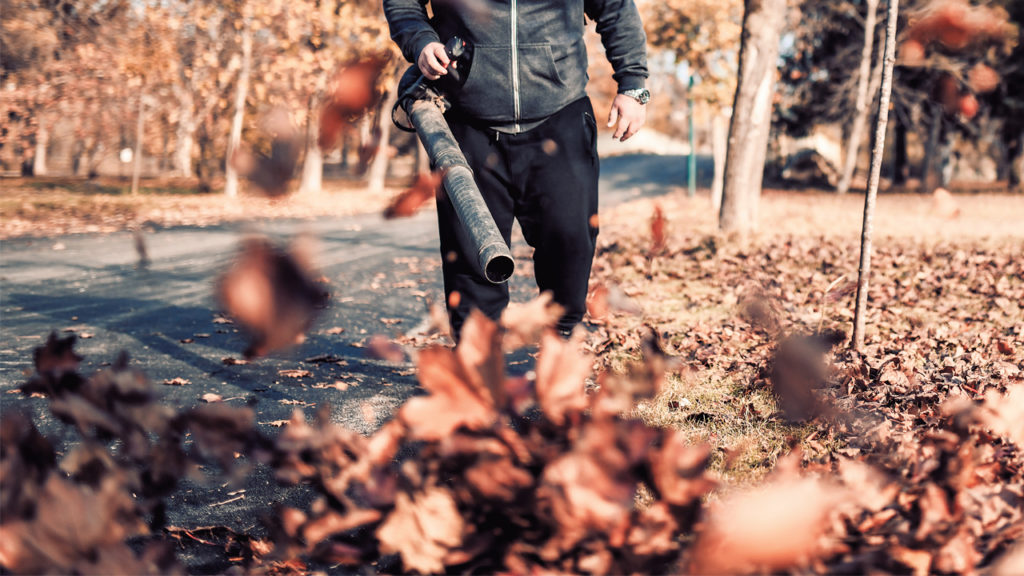 Last year, Toronto City Council approved a motion by city councillor Shelley Carroll to study the impact of two-stroke gas-powered engine leaf blowers and other garden equipment, including the feasibility of a ban. With the report headed to council at some point in the near future, we had Caroll and Landscape Ontario’s Tony Digiovanni outline the pros and cons of leaf blowers.

Living in the suburbs during a pandemic, we suddenly find ourselves having to mute our microphones at virtual meetings during a leaf blowing session in the neighbourhood. But beyond noise, what is more jarring is the array of research that has quantified the environmental impacts of gasoline-powered leaf blowers, from carbon emission to air quality to local ecosystems. This begs the question: given what we know so far, are leaf blowers really necessary?

Most leaf blowers are powered by inefficient two-stroke engines and release large amounts of dangerous emissions and particulate matter due to incomplete fuel combustions. To put it in perspective, one hour of leaf blowing equals a 1,700-kilometre car drive in emission.

Due to this polluting factor, Sacramento has prohibited leaf blowers on days with poor air quality.
More recent studies have also linked the global decline of insect populations to habitat loss, with gas-powered garden equipment as a major contributing factor that harms soil biology. Experts have warned that a trend at this rate will lead to the collapse of our terrestrial and freshwater ecosystems, with profound consequences on our health and well-being.

The proposal of a leaf blower ban is neither new nor impossible. California is outlawing the use and sale of new equipment by 2024. It’s banned in Vancouver’s West End. Portland, Oregon, and Oak Bay, B.C. are asking city departments to phase it out.

We’ve seen an increasing phenomenon of landscapers using leaf blowers outside of the fall season for grass clippings. We need to ask ourselves this: Is it worth the health risk to be exposed to a greater range of air pollutants for convenience while plenty of alternatives are available? That is why we need to start with a seasonal ban to restrict usage and work on a plan to eventually phase it out.

The landscape/horticulture profession comprises over 8,000 companies focused on designing, installing and maintaining the lawns, gardens and green spaces that make the city livable.

We support the need for a quieter city — after all, we are responsible for the green spaces that offer refuge, solace, recreation and beauty. Green spaces also clean the air we breathe, cool the city and trap carbon dioxide
Unfortunately, we need power tools to do the job. There is no other way — especially because our biggest issue by far is finding employees. Power tools are essential.

Leaf blowers are a labour-saving tool, not only for the landscape profession, but for homeowners, the construction industry and parks and works departments. In fact, the parks department is the largest user of leaf blowers in Toronto. However, much can be done to reduce the negative impacts based on education and courteous use. It is the inappropriate use of leaf blowers that causes a great deal of problems.

The other positive development is that modern leaf blowers are quieter and cleaner than old models. There are now battery-powered blowers that significantly reduce the amount of noise. I predict that the issue will be solved within the next five years because manufacturers are continually improving their products. This is a welcome development for trade as well as the public. It is also important to note that leaf blowers are used by more than the horticultural profession.

Leaf blowers are a noisy but legal power tool. No one enjoys the noise generated by leaf blowers. However, with increased education, consideration and the introduction of newer, quieter technologies, the problem of leaf blower noise can be minimized without considering a drastic, expensive and unenforceable leaf blower ban.