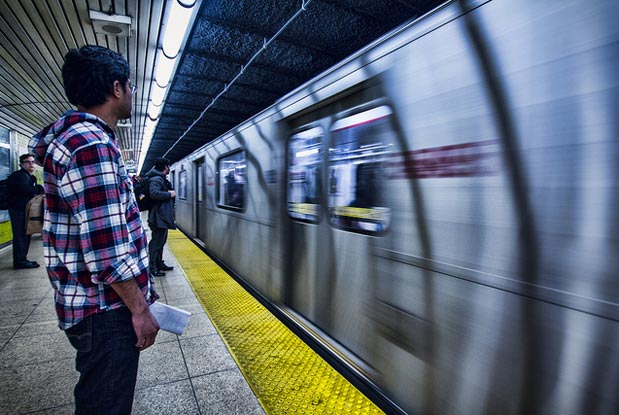 It’s nearing that horrible time of year when I admit to myself that I am too wimpy to cycle and I hang up my bike in favour of a Metropass. Accordingly, it seems only fair that I issue advance notice to those people who have always made my ever-delayed commute the claustrophobic hell that it is. Offenders, consider yourselves warned: here are seven TTC commuters that I want to punch in the face.*

1. Lollygaggers. Allow me to congratulate you on the fact that you clearly have nowhere to be today. It’s evident, as I rush to get to my office by 9 a.m., that you’ve made better choices in life, affording you either a boss who doesn’t care what time you show up or the ability to spend the day bird watching and/or picking wildflowers. Have a fantastic day, but for the love of God, please consider that the people walking behind you might have to be somewhere. Find second gear or get out of the way. Better yet, just stay asleep for an extra hour in the morning. Surely the non-thing you don’t have to do today will still not be there later.

2. Creepers. Remember the girl who stood up in the middle of a crowded subway, approached the guy with sunglasses who was pretending not to stare at her and made passionate love to him right there? No. You don’t remember that story, because it never happened and never will. So stop staring at that girl. She’s not interested, you’re not being subtle, and everyone is creeped out.

3. Megaphones. In addition to being a supporter of early Mormon fundamentalism, Nathaniel Baldwin was an electrician who invented the first set of modern headphones and sold them to the US Navy. Given that that was roughly 103 years ago, there’s literally no reason you can’t have your music pumped directly into your ear instead of playing it out loud — unless, of course, you simply want to be a jerk. Furthermore, hang up the cell phone. It’s obnoxious. There’s one acceptable conversation to be had on your phone while on transit. It is this: “I’m on the streetcar. I’ll call you back in a bit.”

4. Groomers. Most people think makeup is something to be put on before one leaves the house. Not you! “Yes, I wear makeup,” you tell the world. “Foundation, blush, lipstick, eyeliner — it’s all here and you can watch me put it on!” Well this isn’t the powder room, it’s public frigging transit. If you can’t do it at home, maybe you don’t deserve to have curled eyelashes today. And you, sir, the man whose understanding of nail care flies so blatantly in the face of convention that you opt to clip your fingernails in public, well there’s a special place reserved for you in hell.

5. Hungry hungry hippos. A sandwich? Are you serious? I know, you’re thinking, “I’m running late, I’m hungry, why not just eat my meal on the go?” Well, I’ll tell you. In addition to grossing us all out by forcing us to smell your food and watch you shovel it into your face, you might consider Bacillus, Micrococcus, Staphylococcus and the roughly 37 other genera of bacteria that live on subways — roughly five per cent of which are borne by human skin. Still hungry? That’s just the airborne stuff. Factor in the poles, seats and handrails and you’re touching hundreds of thousands of microorganisms well before you stuff that pickle back in your sandwich. Mmm.

6. Grinders. To you folks who insist on standing too close to other commuters, allow me to offer you some advice: take a step away from me. I don’t care if your stop’s next, if there’s a nice breeze near me or if you’re trying not to step in gum; there’s no need for me to smell you or feel any parts of your body pressed against mine. If it helps, just imagine we’re peeing. Would you stand this close to me if we were both urinating? No. So take a step back (note: if you’re actually peeing, please take two steps back).

7. Space cadets. Conversely, to the people who can’t appreciate that our personal space-bubbles need to shrink during rush hour, please note that the seat currently occupied by your feet/backpack/laptop/Cavalier King Charles Spaniel in a sweater should be vacated in favour of allowing a fellow commuter to sit down. There are no dated curtains or Ikea coffee tables in here. This is not your living room. Make room for others.

*Please note that I don’t intend on actually punching anyone in the face. Realistically, the worst these seven types of people might expect from me is an exasperated sigh and/or eye roll. But man will it ever be one peeved eye roll.

In addition to complaining about transit, Ben Johnson also writes about beer on his blog, Ben's Beer Blog. You can follow him on Twitter: @Ben_T_Johnson.